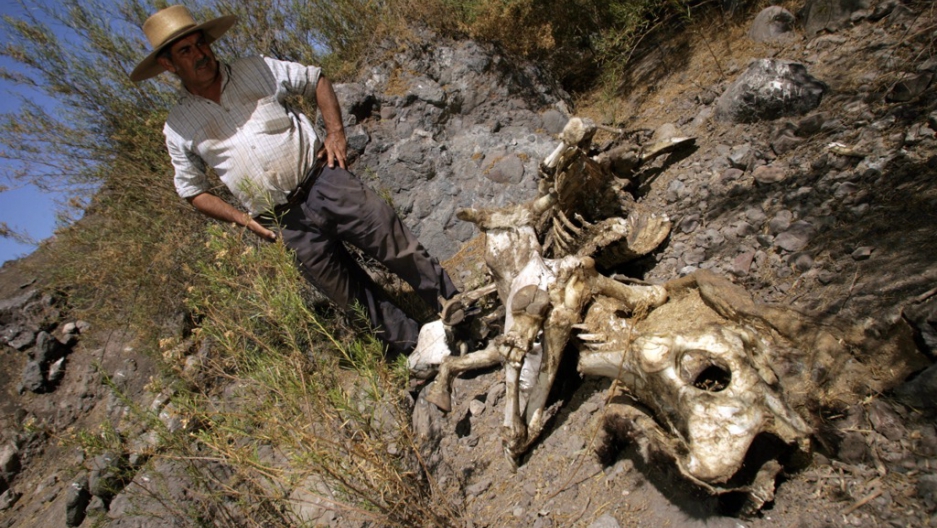 Peasant Segundo Aballay looks at the carcass of a cow in Til Til, an agricultural municipality 50 km north of Santiago, in the province of Chacabuco. Animals in central and southern Chile are dying for the lack of water and forage.
Credit: Raul Bravo
Share

Swaths of Chile are suffering from an “intense and prolonged” drought that has parched the land and sapped water supplies in the South American country, Chile's Agriculture Ministry says.

A rain shortage has caused a state of emergency in nearly one-third of the country’s comunas, French news agency AFP reports. The government plans to funnel some $140 million in aid to the hard-hit areas.

For towns in the United States and Mexico suffering a record drought, those sentiments are painfully familiar.

Markets and consumers are bracing for a new crop production report from the US Agriculture Department, due out Friday, but farmers already know most of the bad news.

For starters, America’s worst drought in over half a century has pummeled yields and could shrink corn supplies to a 17-year low, says a Reuters poll. Not just corn, but hard-hit soy and wheat prices soared on fundamentals.

So what's the global fallout?

“While high food prices are devastating for importing countries that are already deeply food insecure, they can also be economically destabilizing for lower- and middle-income countries with big populations that import large amounts of food. Around the world, shortages and price spikes of everyday goods can throw societies into unrest and conflict.”

In the Americas, the fallout is a mixed bag — a cruel season for some, and a predicted windfall for others, as Nick Miroff reported as part of GlobalPost's in-depth drought coverage.

The drought in northern Mexico already has been calamitous for farmers and cattle ranchers, GlobalPost’s Simeon Tegel reported in an in-depth series on climate change in Latin America. Whereas some scientists remain cautious about blaming climate change for specific episodes, more scientific research has come to the fore insisting that human-made global warming is the culprit of recent damaging weather.

In February, Bloomberg News reported that drought had been gripping Chile for two years, threatening mining and exports such as grapes and avocados.

Chilean are especially fearful of steep wheat price spikes: They're the world’s second-biggest bread eaters (after Germans) and they import half the wheat they consume, Santiago Times reported.

So Chile is feeling double drought pain: one exported by the United States, another homegrown. That's got to hurt.