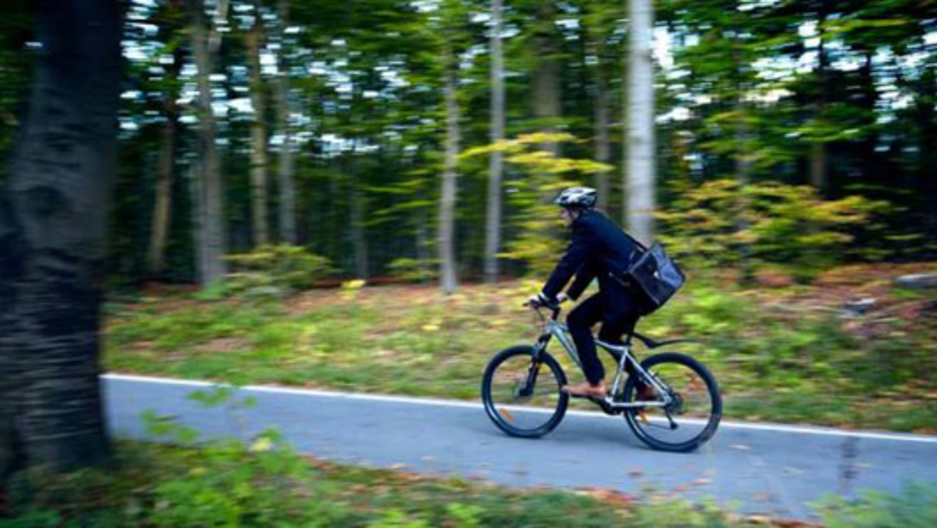 Denmark is planning a network of bicycle superhighways to connect capital Copenhagen to its suburbs. (Photo: cykelsuperstier.dk)

Share
For the Geo Quiz, we are going to a suburb of Copenhagen. The Danish capital has a reputation as a cycling haven. In fact, its urban planning is based on the needs of cyclists and there is even a word for it "Copenhagenization." The government wants to encourage suburban commuters to bike to work and its first target is a town about 10 miles west of the capital on the island of Zealand. It is the end point for a new bicycle superhighway to the capital. Can you guess the name of this Danish suburb? Alberstlund is the answer to the Geo Quiz. It is the first route in a network of 26 bicycle "superhighways" that will connect the capital to its suburbs. Anchor Lisa Mullins talks to Frits Bredal, member of the Danish Cyclists' Federation, who says the extension is just the beginning. "The superhighways, it's an English term which doesn't completely translate. It's not like they built a whole new bike lane along the suburb of Albertslund into the city of Copenhagen," Bredal says. "They've taken existing stretches of bike lane and connected them and made sure that mostly you don't have to stop in front of red lights. You can just go all the way continuously." In addition to bypassing traffic and red lights, cyclists have access to air pumps every mile and there are foot rests at designated stopping points. These perks are just some of many ways that Denmark encourages a biking culture. It's common to see everyone from businessmen in suits to young women dressed up for a night on the town using bikes to get around. "What's unusual about the Danish biking culture is that it's so normal. As opposed to most other countries, where you either bike to exercise or you bike as a kind of political statement to show you want sustainable transportation, in Denmark it's not a statement to bike. The overwhelming reason people bike here in Copenhagen is simply because it's nice and easy; it's convenient," Bredal says. While biking may be more convenient than waiting for a crowded bus, the sheer number of cyclists in the city can lead to other problems like bike traffic. "You do have an enormous number of people and sometimes you do have to fight for your right and for your space on the bicycle lane here. It's how many bikes you have, there's simply a certain degree of bike congestion," he says. But Bredal says it is a small price to pay. In fact, he is looking forward to welcoming even more cyclists into the city.