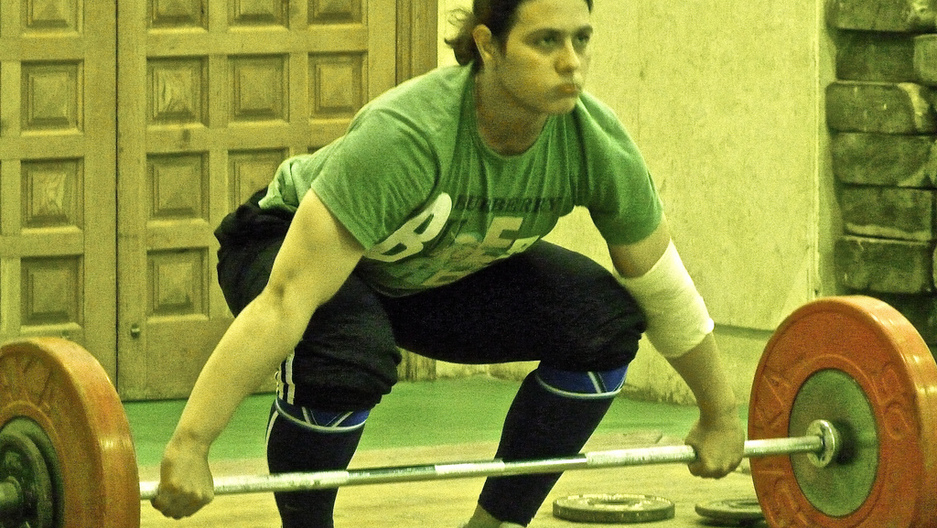 Egyptian weightlifter Esmat Ahmed Mansour trained in Cairo ahead of the London Games, where she placed ninth in her weight class. (Photo by Magdy Samaan.)

Egypt has more than 100 athletes at the London Games — and 36 of them are women. On both counts, that's more than ever before.

Despite having won a silver medal in fencing, weightlighting might have been the country's most anticipated event. And Egypt's three female lifters were among its most-watched athletes, a sign of the sport's growing popularity.

A few weeks ago, 25 year-old Esmat Ahmed Mansour was finishing up one of her last workouts in Cairo before heading to London. She worked her way up 130 kilograms — or about 286 pounds – in what's called the "clean and jerk." Essentially, the lifter pulls the bar from the floor up to the area of her collar bones in one movement, and then thrusts it up over her head.

As she pulled off the lift, Mansour's coaches, Mahmoud Kamal Mahajoub, a former Olympic weightlifter himself, was asked if he could lift that amount of weight. Not now, he said with a laugh.

Mahajoub said the first time he saw a woman lifting weights was in 1988 at an international competition in Eastern Europe. He was very skeptical, he said, about women competing in anything other than what he called "smooth" sports.

"At this time, I believed that women's sports should be gymnastics, swimming," he said. "But weightlifting, this was very strange."

At that time, he said, "this was normal."

Weightlifting is popular in Egypt. Mahajoub said you can go to just about any small village and find lots of young people pumping iron and building their bodies.

Egyptian Olympians have been lifting weights since ancient times, but they've had more modern success too. Mahajoub said Egypt has won six gold medals over all in weightlifting. And the last one, coincidentally, was back in 1948, in London.

Mansour placed ninth last week in London for her weight class. One of her female teammates came in fifth Friday and another placed fifth Sunday. No Egyptians are competing in the one weight-lifting event remaining to be contested.

Despite falling short of medaling, Mansour said the team was ready to compete.

She started getting serious about weightlifting when she was nine. Nowadays, she spends the whole year traveling, training and competing. Women's weightlifting, she said, was getting a lot more attention.

Like most of the women on the Egyptian team, Mansour does not wear a headscarf. She works out right alongside her male teammates at Cairo's main athletic center.

"People in Egypt have gotten used to the idea that a woman's place is in the home," Mansour said. "But women like me want to show that we can compete."

She added that her family fully supports her career.

"But some Egyptians give me a hard time. They make ignorant comments. And I don't really care," she said. "Since I've proven myself in weightlifting, more and more Egyptian girls have been taking up the sport."