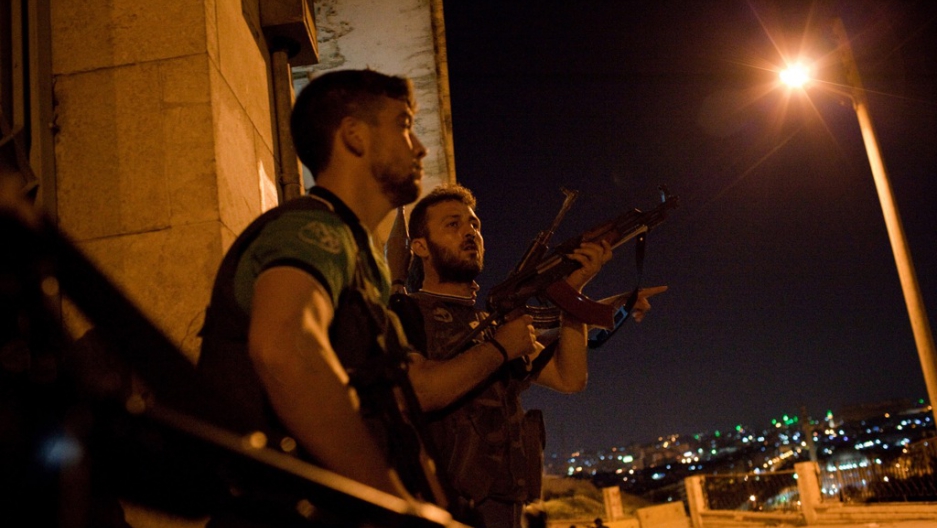 Fighters with the Free Syrian Army prepare to fight in the neighborhood of Ezza in Aleppo, Syria, on Friday, August 3, 2012, the first time the opposition army has entered the area to face government forces, facing snipers, helicopter and tank fire.
Credit: Nicole Tung
Share

But while the image might denote a victory, regime forces remain very much in control of Syria’s largest city.

On Monday, MIG jets pounded Bustan al-Qasr, a crowded Sunni neighborhood of more than 300,000, reducing much of it to rubble. Free Syrian Army fighters could only point their AK-47s toward the sky in vain.

The airstrikes took their toll on the civilian population.

At least eight people were killed in the strikes, including seven from a single family. With no stretchers, residents carried the injured on mattresses to pick up trucks acting as makeshift ambulances. The trucks raced through the rubble to bring them to hospitals. At one clinic, Ahmed Latif Querea carried the body of his 1-year-old lifeless son, Yousef.

“There are only civilians in this area! The jets bombed the building and it collapsed on them,” an elderly man said, helping to clear the debris. “There is no place to take refuge, there is no one to rescue the wounded. They are trapped inside.”

The loose coalition that makes up the Free Syrian Army here has adopted a strategy of quick guerilla-style attacks in the heart of the city — where the heavy weapons of the regime have trouble maneuvering — to slowly swallow up territory.

The strategy has worked to some extent. The rebels hold several key neighborhoods and have pushed all the way to the gates of the city’s famed citadel.

But blanket airstrikes like the one launched Monday by the regime, which is amassing troops on the city’s outskirts, have so far prevented the landing of any decisive blows in the two-week-old battle for Aleppo.

“The plan is to tie up the bulk of the Army in Salahadin, where most of Assad's forces are, while we move to places like Saif al-Dawla,” said Free Syrian Army Capt. Hussam Sabha, who defected from the regime earlier this year.

On Aug. 4, his brigade of some 100 fighters managed to briefly wrest control of Ezzaa, a strategic neighborhood that overlooks Aleppo’s center.

“This is a true street fight. Assad forces are not good at street fighting,” he said. “They cannot use tanks in many areas and after one year and seven months, they are very tired.”

As Hussam’s fighters entered Ezzaa for the first time, they hung out of their vehicles, raising their AK-47s in time to revolutionary music. Locals cheered them on.

The fighters dismounted to attack a TV broadcasting center full of regime snipers. Moving in groups of twos and threes, the rebels scaled the stairs to the top of an apartment building still full of frightened civilians. They fired down on the sniper positions with machine guns and rocket-propelled grenades.

More from GlobalPost: Aleppo's Christians arm themselves against Islamists

But by the early morning, the regime’s air power and tank shelling had again driven the rebels back.

It is unclear how long the Free Syrian Army will be able to fight battles like these. Regime battalions coming from Damascus and the Mediterranean coast continue to move into what appears to be a staging area in Hamdania, a neighborhood adjacent to Salahadin, the center of rebel control.

“We cannot take these places,” said Mohamed, a defected communications officer now working with the Free Syrian Army. “There are too many tanks there.”

Editor's Note: here's a series of raw video images that reporter James Foley collected in Aleppo. Warning: some of this material is very graphic: