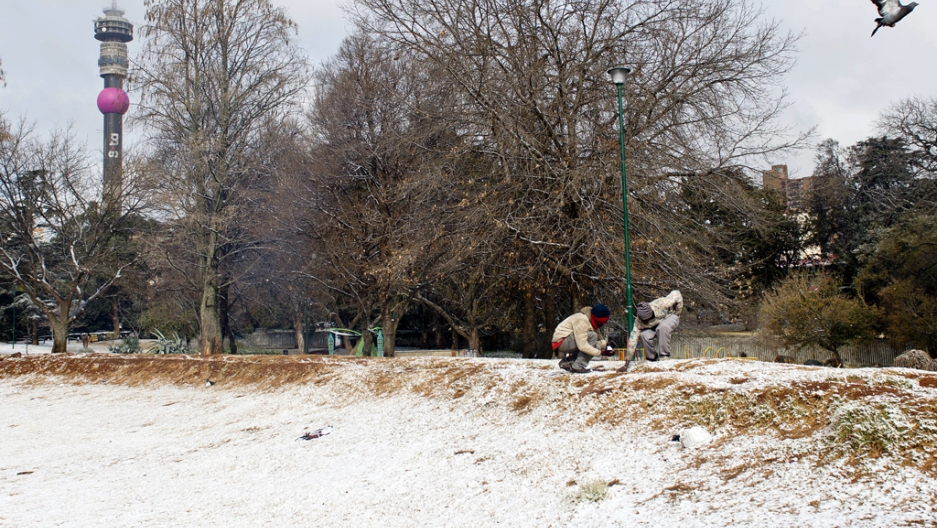 Two people play with snow in a park on August 7, 2012 in Johannesburg. Snow falls annually in the mountains of South Africa and Lesotho, which even hosts a ski resort. But some high-altitude border posts between the countries received so much snow today that they were forced to close.
Credit: AFP
Share

An extreme cold snap covered large swaths of South Africa with snow on Tuesday, the first time in years as much of the cold stuff has fallen there.

In fact, it has snowed in Johannesburg, South Africa on only 22 other days in 103 years, The Associated Press reported.

Parts of central and northern Freestate province, as well as in southern areas of the province Gauteng, have seen light snowfall.

It brought office workers outside to take pictures, catch snowflakes on their tongues and slide down snow-covered hills using cardboard for sleds.

But it also closed roads or snared and slowed traffic.

“It’s difficult to gauge how much snow has fallen as we don’t really measure snowfall in South Africa, but it’s more than we have had since 2008,” forecaster Venetia Phakula said, the Mail & Guardian reported.

Johannesburg appears to have received the brunt of the extreme weather, while US Secretary of State Hillary Rodham Clinton’s African trip continued in a snowy Pretoria.

This much snow hasn’t fallen in Joburg since 1981, and it hasn’t snowed in Pretoria since 1968, SouthAfrica.info reported.

The snow was expected to stop early Wednesday in some areas as temperatures climb slightly, but cold weather should continue for a few days.

It could warm slightly for the national Women’s Day holiday on Thursday.

[View the story "Snow in South Africa" on Storify]