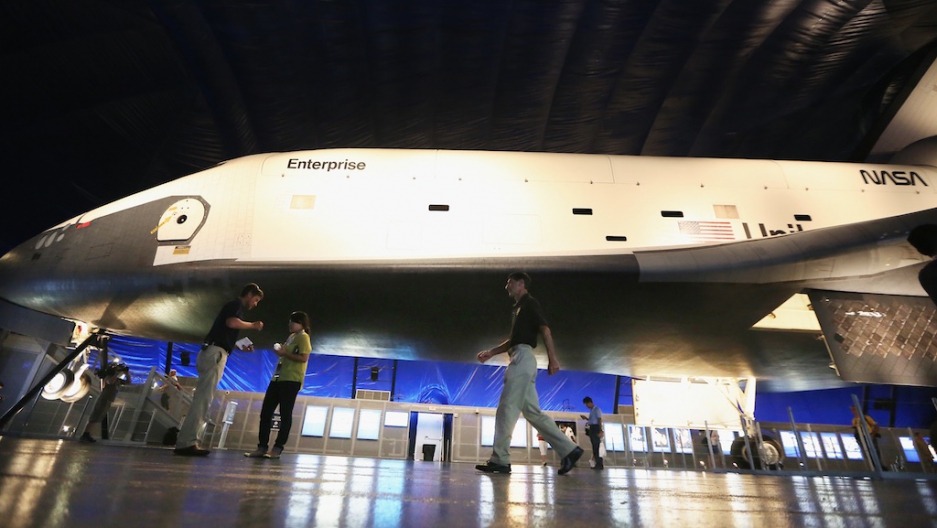 The Space Shuttle Enterprise is seen at a press preview of the Intrepid Sea, Air & Space Museum’s new Space Shuttle Pavilion on July 18, 2012 in New York City. NASA has given 28 special projects funding which hope to be the next phase of space exploration.
Credit: Mario Tama
Share

NASA has set its sights on the next set of futuristic projects to top Mars rover Curiosity's successful landing Monday.

NASA's Innovative Advanced Concepts (NIAC) Program has awarded funding to 28 space exploration devices hoping to be the next big thing in the galaxy, the Escapist reported.

The projects are divided into Phase I and Phase II, depending on where they are in their development. Eighteen Phase I endeavors receive $100,000 for one year, to explore the feasibility of their idea. Ten Phase II projects, a mix of new schemes and those that made it through Phase I last year, were awarded as much as $500,000 over two years, Wired reported.

Some of the most mind-bending schemes are those in Phase I, and include a submarine designed to explore Jupiter's icy moon Europa, a robot with plans to land-sail across Venus' surface, and a device that would repurpose the solid components of wastewater and use them to shield against radiation, NASA reported.

Phase II green-lighted projects include V2Suit, a space suit that imitates the sensation of Earth-like gravity for the astronaut wearing it, even when they're in micro- or even zero-gravity. Also in the second phase is a robotic construction technology that would utilize Mars or Moon rocks to build solid structures, and a "flexible electronics platform" for printable spacecraft, according to Wired.

"These selections represent the best and most creative new ideas for future technologies that have the potential to radically improve how NASA missions explore new frontiers," said Michael Gazarik, director of NASA's Space Technology Program at the agency's headquarters in Washington, Giz Mag reported.

"Through the NASA Innovative Advanced Concepts program, NASA is taking the long-term view of technological investment and the advancement that is essential for accomplishing our missions," Gazarik continued. "We are inventing the ways in which next-generation aircraft and spacecraft will change the world and inspiring Americans to take bold steps."

More from GlobalPost: NASA Mars rover landing to be broadcast in Times Square