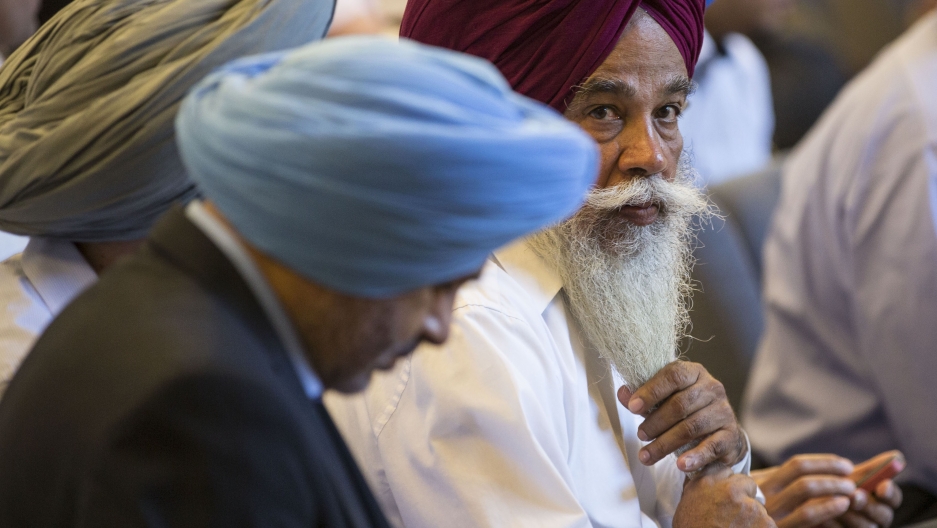 Members of the Sikh community gather at Oak Creek Centennial Church for a press conference in Oak Creek, Wis. (Photo by Reuters.)

Investigators may never know what caused Wade Page to open fire Sunday in a Sikh temple in Oak Creek, Wis., killing six people and wounding three others before being gunned down himself by police.

But Page, a reported white supremacist, was not the first to show malevolence toward the often misunderstood religious sect. Hatred towards Sikhs has previously been caused by misinformation over their identity, religious beliefs and greater role in terrorism.

With their hair tightly wrapped in turbans, Sikh men have been mistakenly identified — and sometimes targeted — as Muslims. That was the case in Mesa, Ariz., in 2001, when a Sikh gas station owner was shot and killed by an assailant who reportedly thought he was Muslim.

A monotheistic religion founded in India's northwestern Punjab region in the 15th century, Sikhism has since spread across the globe. It has more than 27 million adherents worldwide, including about 300,000 in the United States.

"One of the fundamental concepts of our religion is that we accept other faiths," said Livleen Singh, founder of the Sikh Youth Federation of North America. "That is a very key aspect of whatever we teach."

As immigrants, Sikhs are often struggle with maintaining tradition and trying to fit into American society. But Singh says both are possible.

Singh says he understands that an act by an individual does not reflect the actions of an entire community.

Singh’s son, Kavitoj, echoes his father's sentiment. He says he has a "pure motivation" to educate others about Sikhism and "about the fact that you can't judge an entire community based on an individual's actions or a small group."

"That's where a certain level of maturity and wisdom comes in," he said. "You have to really look at it from all angles and think, 'Am I acting impulsively or am I acting with proper knowledge and proper justification?'"

Singh plans to discuss the Oak Creek shootings at a camp he runs for Sikh children.

"It's something we're going to address in terms of how they should be responding when they go back to school in August and September," he said. "We'll help them with it."