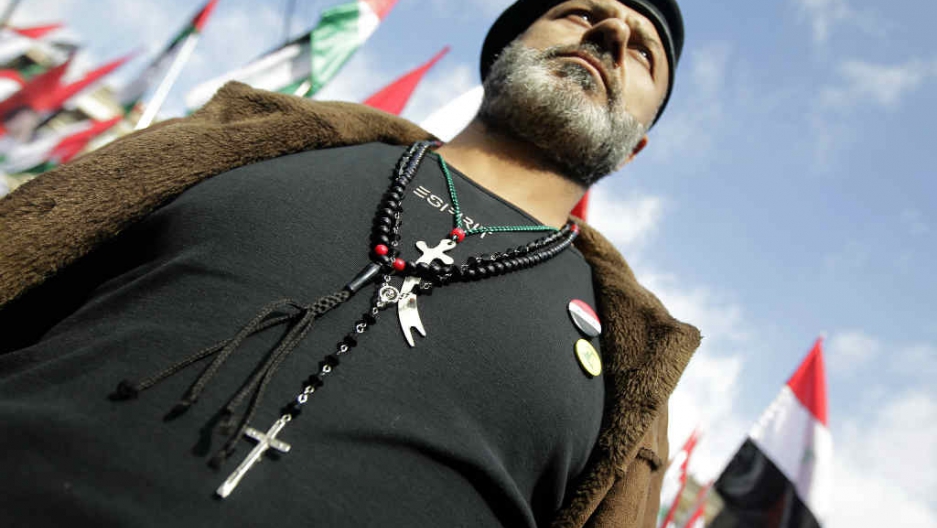 A Syrian supporter of President Bashar Assad wears a Christian rosary, Sunni praying beads and a Shiite Imam Ali sword around his neck. But the days of the Arab Spring are long gone, as the war in Syria has turned into a Sunni vs. Shiite rivalry.
Credit: Joseph Eid
Share

As bombs rain down on Aleppo, Syria’s 17-month-old conflict has entered a new and dangerous phase.

Born of an Arab Spring-inspired desire for greater democracy, experts say that powerful geopolitical forces are now driving the war, with implications across the Middle East.

For an explanation of how the conflict is morphing into a proxy war, and how sectarian rivalries are fueling the violence, GlobalPost turned to Marius Deeb, Professorial Lecturer in Middle East studies at Johns Hopkins School of Advanced International Studies. Professor Deeb is a Syria expert, and author of Syria’s Terrorist War on Lebanon.

This interview has been condensed and edited by GlobalPost.

Prime Minister Riyad Farid Hijab, who departed from the Syrian government yesterday, is a Sunni Muslim — one of several high profile Sunnis who have split with the regime recently. Is there growing evidence of a sectarian divide in Bashar Al-Assad’s government? More broadly, early on Syria’s conflict was a struggle for liberty. Has that changed?

The protestors started out peacefully, seeking political reform. In the beginning, they were universal — encompassing all sects, and some of the young people are still thinking in these terms. But the regime used violence against them. This led to the emergence of the Free Syrian Army, to fighting against the regular army and to guerilla warfare.

It’s important to understand that Syria has always been sectarian, since day one. The regime has been Alawite-dominated since 1970, when the father, Hafez Al-Assad took power. All the Sunnis who have held senior positions derive their power from the fact that they were working for Alawites. The regime’s backbone in terms of the military and intelligence officers who really control the regime are Alawite.

Having a prime minister leave — so what? Consider, Manaf Tlas, the [Sunni] general who defected in June — [regarded by some as the most prominent military defector so far]. His father was the defense minister, but his father had no real power; The official under him who exercised power was Alawite. The son, Manaf Tlas, commanded a sort of brigade, but really his power derived from Alawite intelligence officers. When he defected, he left alone — the army, his soldiers, would not leave with him.

The Alawites were persecuted by the Sunnis under the Ottomans Empire for years, and therefore they have prepared to defend themselves. The Alawites are not even Muslims, strictly speaking. They claim they’re Shiite, but really, they don’t go to mosques, they don’t go on pilgrimage to Mecca, they don’t fast during Ramadan — they actually celebrate Christmas. That’s the basic problem. From 1971, the regime has prepared for when they’re going to be ousted from power, from Syria, and eventually they have to form their own state.

In the Guardian, Jonathan Steele writes, "Under Saudi, Qatari and US leadership, and with British, French and Israeli approval, [Syria's conflict] has turned into an anti-Iranian proxy war." Would you agree?

I agree that from 1980, Hafez Al-Assad, made a brilliant move to have a very strong alliance with Iran, which is basically Shiite. The Alawites in Syria regard themselves as Shiite like the Iranians.

In that respect, a fight against the regime would weaken Iran, because Syria and Iran are major allies. It would weaken Hezbollah, which is really an outshoot of the Iranian ideology in Lebanon. Yes, there is an axis evil — Iran, Syria and Hezbollah — and I think the war will weaken Iran. I don’t think Iran will be able to save the regime and control the whole of Syria. I think that’s impossible.

How does the Syrian conflict affect Israel's quest to prevent Iran from getting a nuclear weapon? Would the war make it easier for Israel to bomb Iran's nuclear facilities?

In a way, yes, because the Syrian army is busy, so it’s not a threat anymore. It’s not going to be threat in the future at all. In fact, the Alawite army might become a friend of Israel.

Iran has problems because Israel could attack, the US could attack, and also it could suffer from cyber attacks, which have been successful in the past — which are more effective and less costly.

Iran has always wanted to have a nuclear weapon, continues to do so, and if we don’t stop it — through negotiations or through military action — it will pursue that goal. I don’t see the Syrian conflict as an important factor, but the Iranians could take that into consideration. For them, Syria and Hezbollah are really the strongest and only allies in the region.

So it would make it more difficult if the Israelis did attack Iranian nuclear facilities — it may complicate efforts to strike back?

With Syria busy, the only option for Iran is to use Hezbollah, which has really been a servant of Syrian and Iranian interests since it was established in 1982. So it could use Hezbollah to create problems for Israel. But I don’t see a major problem in that.

In another way, because Syria is out of the question, an Israeli attack on Iran might make the Sunnis of Saudi Arabia, Qatar and Bahrain happy.

Finally, Saudi Arabia has taken an unusually aggressive role in Syria, last week pushing a UN General Assembly resolution calling on Assad to step down. Why is Saudi Arabia is doing this, and how does it affect peace and stability in the region?

It’s about the Sunni-Alawite rivalry. There’s an opportunity to get rid of the Alawites who control Syria, who are allies with Iran and with the rulers of Iraq — who are still supporting the regime in Syria. Putting Syria in the hands of the Sunnis is good for [Sunni-majority] Saudi Arabia. Of course, the Saudis do not believe in political and religious freedom, it’s a bastion of oppression, but it plays its role differently abroad.

More from GlobalPost: Syria: Rebels are no match for Assad's jets