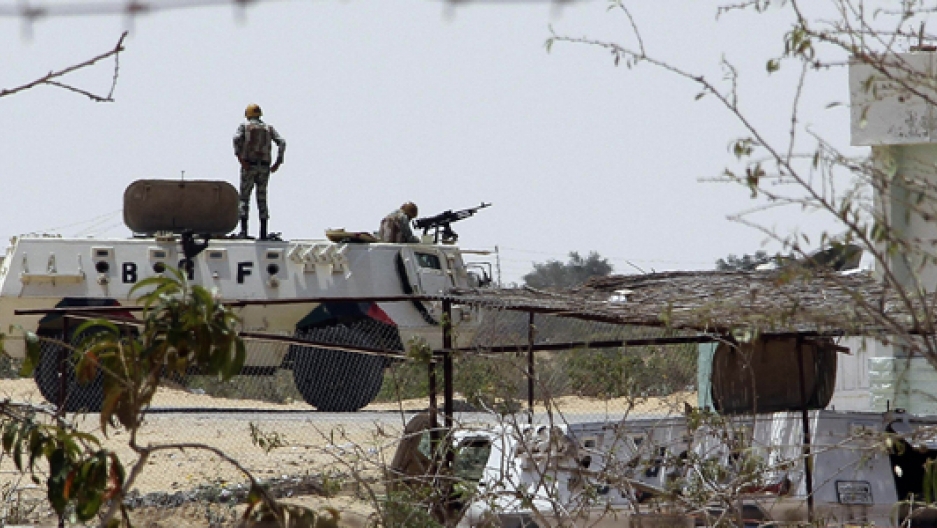 Egyptian soldiers stand guard at a checkpoint in Rafah city on the Egyptian border. (Photo by Reuters.)

Then they headed for the crossing into Israel. The Israeli Air Force bombed the attackers, killing eight.

The Muslim Brotherhood, the party of Egypt’s president, accused Israeli intelligence of orchestrating the attack. Hamas, which controls Gaza, condemned the killings. And Monday it sealed a warren of smuggling tunnels that run under the Gaza/Egypt border.

Cairo claims the gunmen had used these underground links to reach Egypt.

Egyptian officials called Sunday night’s attack a cowardly act committed by infidels. President Mohammed Morsi said “those who carried out this crime will pay dearly.” And he vowed to “impose full control over these areas of the Sinai peninsula.”

Israelis certainly appreciate that sentiment, but they’d like to see a lot more action on the ground. Officials here have been warning for months about the security threat from Islamic extremists based in Sinai. Israeli Defense Minister Ehud Barak said the attack could have been a lot worse.

“In my opinion, the risk of a heavier attack was prevented and this is also a very important, successful operation in the fight that has occurred there along the entire border. And perhaps it will also be a proper wakeup call to the Egyptians to take matters in hand on their side of the border in a firmer way,” Barak said.

Israel and Egypt have mutual interests in the Sinai. Israel shares a long border with the desert region, while Egyptian security forces have had frequent gun battles with criminal gangs and extremist groups. Both countries would like to see a return of law and order.

“The evidence so far suggests so far that this is not a priority for Egypt,” said Ofer Salzberg, a Middle East analyst with the International Crisis Group.

Salzberg said Israel has encouraged the Egyptians to deploy additional army battalions and police forces to Sinai. But so far, they haven’t done so.

“What Israel is trying to do now is to convince Cairo that such incidents as the recent one mean that Egypt has to increase its efforts even more and that this is urgent,” he said.

But this isn’t so much an issue of will, said Steven Cook of the Council on Foreign Relations. It’s about whether post-revolutionary Egypt has the capacity to deal with the Sinai’s complex challenges.

“The residents of the Sinai have long felt that they have been neglected by the central government in Cairo. They have been abused by the police. There is significant socio-economic problems throughout the Sinai but, in particular (in) northern Sinai,” Cook said.

Cook said that includes weapons smuggling, drug trafficking and human trafficking. Then add to that mix the various jihadi and extremist groups, hostile to both Israel and the Egyptian government.

“I don’t think that firepower, even if the Egyptians could bring significant amount of firepower to bear in Sinai, is going to resolve these problems,” he added

Both Egyptian and Israeli officials have said Palestinian militant groups from Gaza are active in the Sinai peninsula. But the Islamist group Hamas that controls Gaza quickly and resoundingly condemned Sunday’s attack. That could have something to do with the fact that Israel holds Hamas responsible for any attacks that originate in the Gaza Strip. But it could also be sign that President Morsi is sending a message to Hamas to reign in Palestinian groups that might be planning more attacks against Israel.

“Both Egypt and Hamas have a common interest in not allowing this kind of thing to happen and the fact that Egyptian soldiers were killed in the process, makes it easier for him to apply the pressure on the Hamas leadership in Gaza,” Cook said.

Egypt moved quickly after the attack to close its border crossing with the Gaza Strip indefinitely. That’s a serious move, because the crossing at Rafah is the only one in Gaza not controlled by Israel.