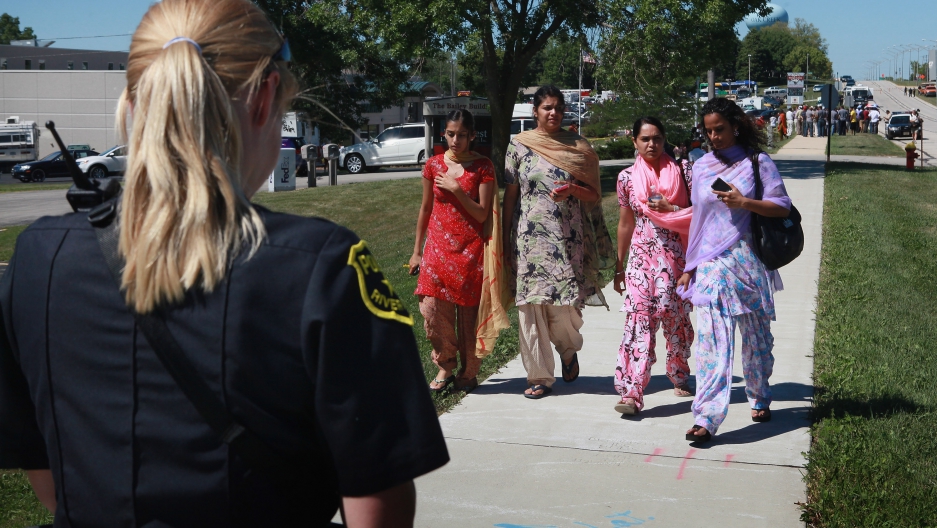 People mill around in front of the Sikh Temple of Wisconsin where at least one gunman fired upon people at a service August, 5, 2012 Oak Creek, Wisconsin.
Credit: Scott Olson
Share

Authorities have identified the gunman at a shooting that killed six people at a Sikh temple in suburban Wisconsin as Wade Michael Page.

According to CNN, the gunman, who was shot dead by police, was a 40-year-old Army veteran who had served at Fort Bragg Army Installation in North Carolina, Fox News reported.

Page joined the military in 1992, worked as a repairman for the Hawk missile system, and later became an Army psychological operations specialist, according to Boston.com. He was later discharged for a "pattern of misconduct," according to ABC News.

According to the New York Post, Page was reportedly a skinhead with a 9/11 tattoo. Police have been searching Page's home, a duplex in Cudahy, Wisconsin. Page had only lived in the apartment for about a week, and had just broken up with his girlfriend, the mother of his landlord told Greendale Patch.

Police have not identified a motive, but have labeled his shooting rampage as an act of domestic terrorism. Sources told CBS News that authorities were investigating the shooting as a possible hate crime.

"It's sad, I don't know how to describe it," one of the temple's committee members, Ven Boba Ri, told the Milwaukee-Wisconsin Journal Sentinel. "It's pretty much a hate crime. It's not an insider."

The Southern Poverty Law Center (SPLC), a nonprofit civil rights organization based in Montgomery, Alabama, had been aware of Page as early as 2000, when they discovered he had attempted to buy goods from the National Alliance, a neo-Nazi organization the SPLC says was then "America's most important hate group."

In 2010 Page gave an interview Label 56, a white supremacist website. Page said, according to the SPLC, “The inspiration was based on frustration that we have the potential to accomplish so much more as individuals and a society in whole.”

That interview, available online earlier today, has been taken down by Label 56.

It's important to note that while the Wisconsin shooting has not yet been deemed a hate crime, violence against Sikhs is not uncommon in America. According to sikhcoalition.org, there have been a number of violent incidents against Sikhs in recent years.