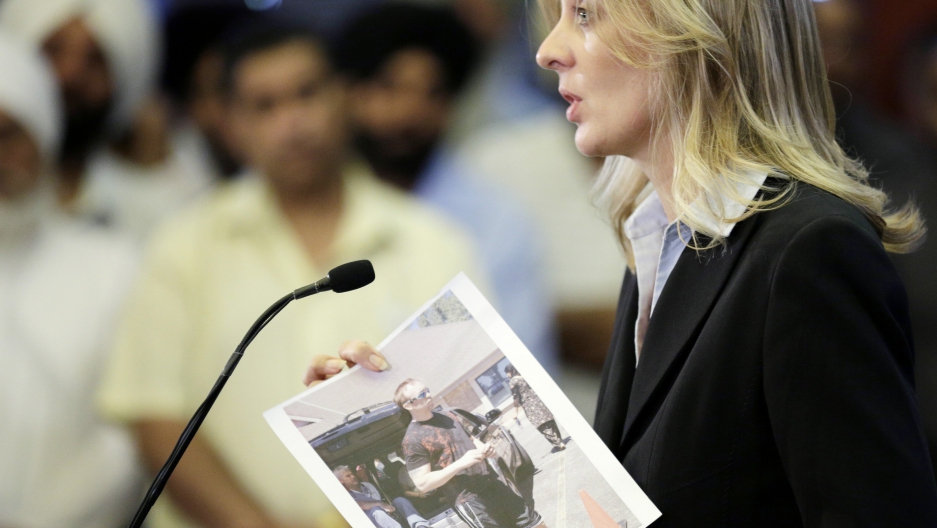 FBI Special Agent in Charge Teresa Carlson holds up a photo of an unknown person of interest in the shooting at a Sikh temple this weekend during a news conference in Oak Creek, Wisc., Aug. 6, 2012. (Photo by John Gress/Reuters.)

Wade Michael Page, a 40-year-old Army veteran and member of a white supremacist band, is accused of killing six people and wounding others at a Sikh temple in suburban Milwaukee over the weekend.

Police are looking for another "person of interest" in connection with the case as well.

The Southern Poverty Law Center on Monday called Page a "frustrated Neo-Nazi," who had been playing in racist bands for more than a decade. According to the SPLC, his bands have included Definite Hate and End Apathy.

Page was demoted and discharged from the U.S. Army after serving for six years. The FBI called the shooting a matter of possible domestic terrorism, but said Page has not been on their radar or that of any other law enforcement agency.

But the Southern Poverty Law Center has been watching Page since 2000.

Heidi Beirich, director of the Intelligence Project at the SPLC, said Page was first spotted in association with a Neo-Nazi group known as the National Alliance — a violent group that's spawned a lot of violence and whose leader inspired Timothy McVeigh and his plot to blow up the Oklahoma City Federal Building. The SPLC has long-tracked white supremacists and their activities.

"Anybody who comes in contact with the National Alliance, we're obviously very concerned about," Beirich said. "Additionally, he was also involved in hate bands and had attended hate band events."

Beirich said he was very active in the extremist world that the SPLC tracks.

But even though the SPLC has tracked Page for more than a decade, the FBI can only track people against whom they're investigating an active case.

"There are certain strictures to what they can do. If there's no indication of violence from an individual ahead of time, then that person wouldn't be on their radar like they are for us," Beirich said. "We do write about these investigations; we've not written about him in particular."

But Beirich said their research has found that many domestic terrorists, including James Wenneker von Brunn who attacked the U.S. Holocaust Memorial in 2009, share a Neo-Nazi ideology, beliefs like Page seemed to have held.

"That is, obviously, something that is a concern, when it comes to domestic terrorism — and I know a concern the FBI shares," Beirich said. "We see this over-and-over again with people involved with these extremist movements. There's just a certain section of them that are really motivated to commit violence."