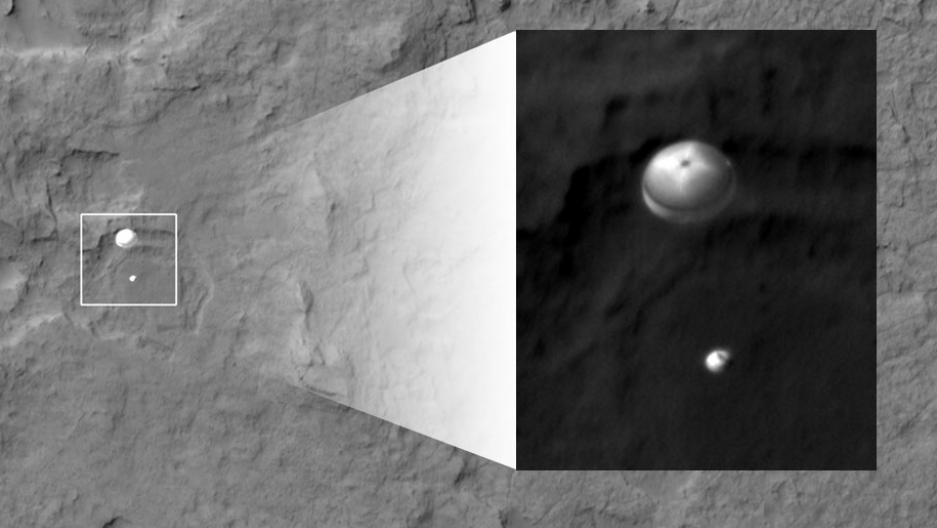 In this image from NASA, the Curiosity rover moved from space toward the surface of Mars using an innovative and elaborate landing system. (Photo courtesy of NASA.)

Miguel San Martin remembers exactly when he decided he wanted to be a space engineer.

“It was on a cold winter’s night in 1976, looking up at the sky at my parent’s farm while I listened to the BBC on short wave, reporting the arrival of the Viking mission to Mars,” he said.

San Martin was 17 at the time and living in his native Argentina. Little did he know then that some two decades later he would be working on NASA’s next Mars project: the Pathfinder mission in 1997.

The American space agency hired the aeronautics and astronautics expert right after he received his master’s degree from the prestigious Massachusetts Institute of Technology.

After 27 years at NASA, San Martin on Sunday night faced his largest challenge to date, as the Curiosity rover — launched last November — reached the Red Planet, after a more than 354 million-mile voyage.

As the head of Guidance, Navigation and Control at the Mars Science Laboratory Project, San Martin was responsible for Curiosity’s safe landing on Mars.

It was no easy feat: Curiosity is not only NASA’s most sophisticated rover, carrying 10 of the agency’s most advanced scientific instruments. It’s also the largest and the heaviest space vehicle created by the American agency, doubling the size of its predecessors, Spirit and Opportunity, which were launched in 2003.

That meant NASA had to redesign its landing procedure, as the system of inflatable bags used to deposit the previous rovers on the surface of the Red Planet could not protect Curiosity’s approximately 9.8 feet of length and nearly one ton of weight.

That’s where San Martin’s expertise came in. He and his team designed the software that allowed Curiosity to reach Mars in an extremely complex automatic landing procedure that has never been used before.

“Many people think that I’ll be controlling Curiosity with a joystick, as though I was playing a video game, but nothing could be further from the truth,” San Martin said to BBC Mundo before the landing.

In fact, not only was the landing completely automatic, San Martin and the rest of his crew weren't even be able to follow the event in real-time.

Because of the distance between Earth and Mars, there is a 14 minute delay for communications between the neighboring planets.

In addition to the time delay, the NASA team also had to deal with limited feedback on what is going on in space. They won’t have a visual. Their only clues were from coded information sent by nearby satellites and a radio frequency that changes tones when different mechanisms are activated.

When Curiosity reached Mars, the experts had no choice but to hold their breaths for seven minutes.

“We call it the seven minutes of hell,” San Martin said. “Curiosity will reach Mars’s atmosphere at a speed of approximately 13,000 miles per hour and seven minutes later it must land safely on the ground.”

It did. All 76 mechanisms involved in the landing process went off without a glitch.

Curiosity’s mission is to study the crater’s rocks, in search of clues that might indicate if life could have occurred on the Red Planet sometime in the past.

Many are hopeful the $2.5 billion project might answer a question that has haunted scientists for centuries: Is Earth the only place that could harbor life?

It’s an enigma that San Martin has wanted to solve ever since he was a boy.

However, the NASA veteran warns Curiosity's ultimate success might depend more on luck.

“We try our best to pick the right spot to carry out our investigations but finding places where life could have occurred based on the limited information we have is more an art than a science,” he said.