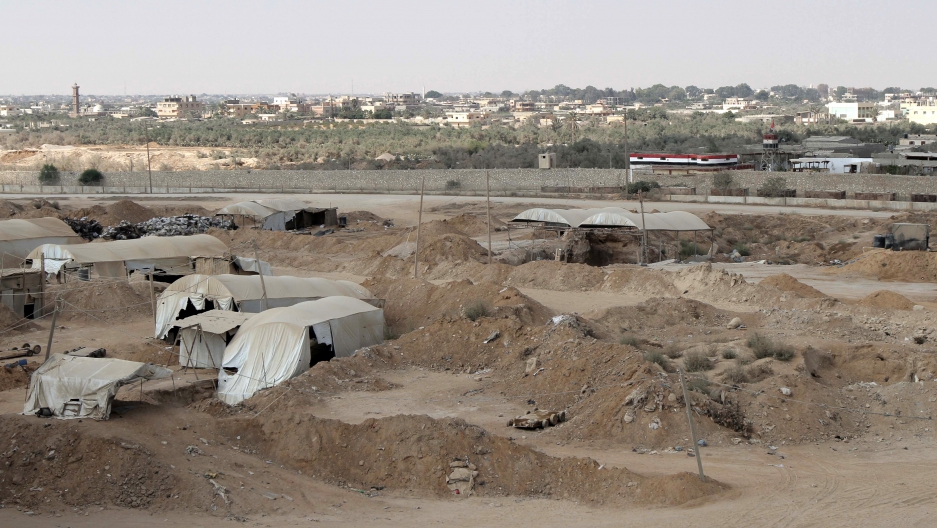 Tents cover entrances of tunnels used for smuggling along the Gaza-Egypt border, near the southern Gaza Strip town of Rafah on August 06, 2012.
Credit: SAID KHATIB
Share

Israeli intelligence services had prior warning of impending attacks from Egypt and so was ready for the assault at a Sinai border crossing that killed 16 Egyptian soldiers, the Israeli military said Monday.

The Sunday evening attack by suspected Islamist militants from the Hamas-run Gaza Strip in Rafah, North Sinai, was one of the bloodiest in years, according to the Associated Press.

Egyptian troops who have increasingly become targets of militants along the desert border, however the Israeli military said Sunday's attack was part of a plot to abduct an Israeli soldier.

Reuters cited Israeli Defense Minister Ehud Barak as saying one of the two vehicles taken by the gunmen after their attack in Egypt had managed to breach a border fence with Israel before being bombed by an Israeli fighter aircraft.

Barak, meantime, said the attack should serve as "a wake-up call to the Egyptians" to better police their side of the border.

Israel has complained about poor security in the Sinai following the downfall of Egypt's former president, Hosni Mubarak.

NBC cited a statement by Barak as saying Israel's military and the internal security agency "thwarted an attack that could have injured many. The militants' attack methods again raise the need for determined Egyptian action to enforce security and prevent terror in the Sinai."

He went further addressing a parliamentary committee, however, according to Reuters saying:

"Perhaps it will also be a proper wake-up call to the Egyptians to take matters in hand on their side [of the border], in a firmer way," he said.

Reuters pointed to a growing lawlessness in the Sinai, a vast desert, with Bedouin bandits, jihadists and Palestinian militants from Gaza benefiting from a demilitarization brought about by the historic 1979 peace deal between Israel and Egypt.

Hamas, meantime, condemned the attack on the Egyptian soldiers.

And Egyptian President Mohammed Mursi accused the attackers of "treason" and said they would "pay dearly" for Sunday's attack, the AP wrote.