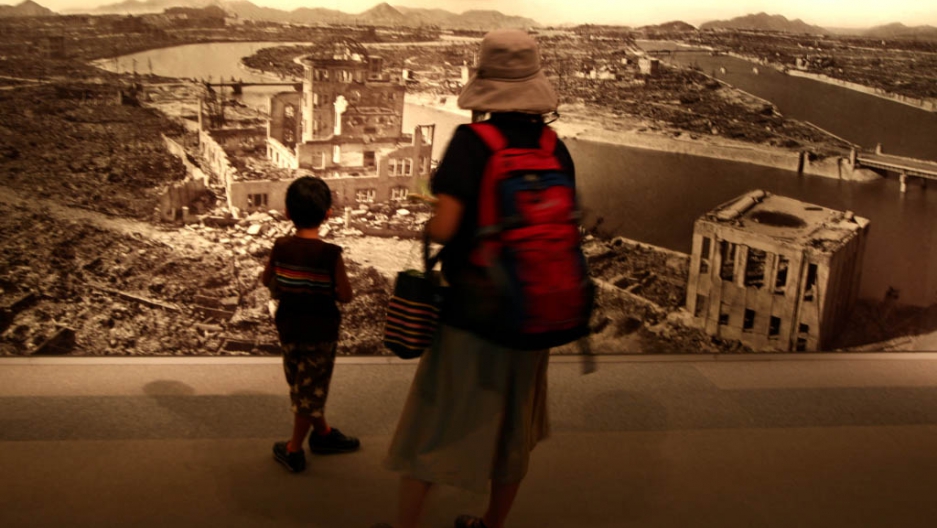 HIROSHIMA, JAPAN - AUGUST 05: A woman woman and her son look wall picture of Hiroshima Peace Memorial, commonly called the Atomic Bomb Dome at the Hiroshima Peace Memorial Museum on August 5, 2012 in Hiroshima. Japan. Tomorrow marks the 67th anniversary of the first atomic bomb dropped on Hiroshima by the United States on August 6, 1945, killing an estimated 70,000 people instantly with many thousands more dying over the following years from the effects of radiation. Three days later another atomic bomb was dropped on Nagasaki, ending World War II.
Credit: Buddhika Weerasinghe
Share

Residents of Hiroshima called for a future without nuclear weapons as they commemorated the 67th anniversary of the bombings that destroyed most of their city.

The Associated Press reports that 50,000 people gathered for a ceremony in Hiroshima's peace park near the epicenter of the 1945 attack.

“I firmly believe that the demand for freedom from nuclear weapons will soon spread out from Hiroshima, encircle the globe, and lead us to genuine world peace," he said.

Agence France Press is reporting that 700 people, including survivors of the atomic bomb and evacuees from the Fukushima nuclear disaster, staged a rally against nuclear power.

An earthquake and tsunami off the coast of Japan left 19,000 dead or missing in the town surrounding the Fukushima Daiichi plant on March 11, 2011.

Anti-nuclear sentiment has been building in Japan since Prime Minister Yoshihiko Noda in June ordered the restart of two reactors at Fukushima.

"We want to work together with people in Fukushima and join our voices calling for no more nuclear victims," said Toshiyuki Mimaki, 70, a survivor of the Hiroshima atomic bomb, told AFP.

Up to 140,000 people died when the United States dropped an atomic bomb on Hiroshima on August 6, 1945, during the last phases of WWII. A second bomb fell on Nagasaki on August 9th, killing 70,000 more.

Truman earlier told Agence France Presse that he feels terrible for the lives lost in Hiroshima but he is often thanked by American veterans who credit the bombings with ending the war early. “I can't second-guess my grandfather," he said. "He always said that he made that decision to end the war quickly. That's what he believed."