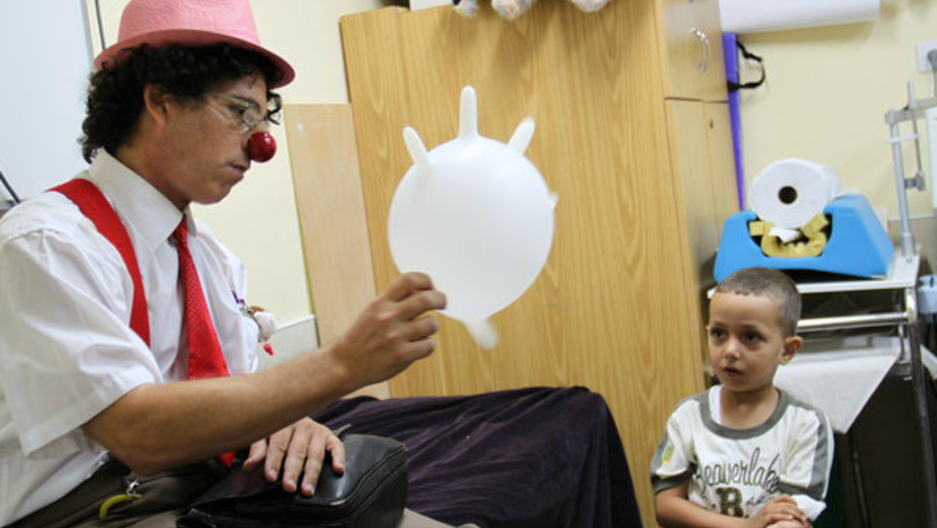 An Israeli medical clown creates an impromptu balloon animal out of a hospital latex glove for four-year-old Yousef Zeytoun. (Photo by Daniel Estrin.)

It's no fun getting blood drawn, especially for four-year-old children. Good thing Yousef Zeytoun was joined at the examination table by a goofy man with a red nose.

The clown grabbed a white medical latex glove, put it to his lips and blew. Ta-dah! It became an impromptu balloon animal, a cow with udders.

Yousef giggled while the nurse secured a cap onto a small vial of Yousef's blood. His mom, Manal, said a few months ago her son was diagnosed with a muscle disease. Since then they've been regulars at Meyer Children's Hospital in Haifa, Israel.

"The clown helps him," she said. "When the clown comes, he is not sick."

While the clown kept Yousef distracted from the needle in his arm, a few clowns from the Netherlands and Russia peeked their heads in the room. They're among a group of clowns from across the world who came to Israel in July for training. They're studying advanced medical clowning, and Israel is a leader in the field.

In their home countries, the Dutch and Russian clowns entertain patients in the waiting room, but they won't enter exam rooms. Doctors don't want the distraction.

Anneli Raejs of Holland said that for many years her clown colleagues didn’t think it was right, either. They didn't want to be associated with pain.

"Children say, 'Oh, help! Injection will come because I see a clown,'" Raejs said. "But now we are changing and trying and therefore we are here."

One clown named "Barambula pistitata kiss kiss hahah," in overalls and pigtails, is trying to get a grimacing girl named Emily to walk up the stairs. Emily suffered burns on her legs and needs to practice walking again. Barambula walks with her a step at a time, joking with her as she climbs each one.

There are about 70 professional medical clowns in Israel who work in about 20 hospitals throughout the country. The clowns are supported by Dream Doctors, a non-profit organization.

But more and more hospitals are chipping in to pay their own clowns. Meyer Children’s Hospital contributes half of the clowns' salaries. Miriam Goldwaser, the hospital's administrator, said the hospital kept at least three clowns on call every day.

"They participate in the treatment as it happens," Goldwaser said. "Really they are important at the pediatric hospital."

The University of Haifa's theater department offers bachelor's degree courses in medical clowning. Ati Citron, the director of the program, said it was the first of its kind in the world. He said Israel's medical clowns were developing new ways to help physicians treat young patients more effectively.

Take Penny Hanuka, a clown who works with rheumatic children who receive regular injections. She is the first to encounter the patient and the family, and she's the one who gives the cue to the medical team when the patient is relaxed enough to get an injection, Citron says.

"That is a big move on the part of the medical team to say we take our cue from the medical clown," Citron said.

Instead, the clown makes a deal with the patient that they're both going to freeze during the procedure. Other clowns go into pre-operation with children and help them relax before surgery.

"Medical clowning is not an entertainment tool," Citron said. "Yes, it also entertains. But the main objective is to contribute to the healing process of the child."

And not only children. Israeli clown Michael Bash recently took some of the visiting international clowns to the adult dialysis ward near Meyer Children’s Hospital. It was the first time they had worked with adults.

"There was one man lying in bed," Bash said. "Five minutes after that he started dancing in the bed. You can see the change immediately."

But not all patients want a clown around. If that's the case, Bash leaves them alone.

There's also reluctance in Israel's medical community to recognize hospital clowning as a legitimate paramedical profession. Citron said he was trying to change that, which is why he started the bachelor degree program.

"We thought that academization of the profession would eventually make it easy for the Israeli Ministry of Health to recognize it as a creative arts therapy," he said.

Citron added that if medical clowns were considered bona fide therapists, hospitals would pay them proper salaries, just like doctors and nurses.