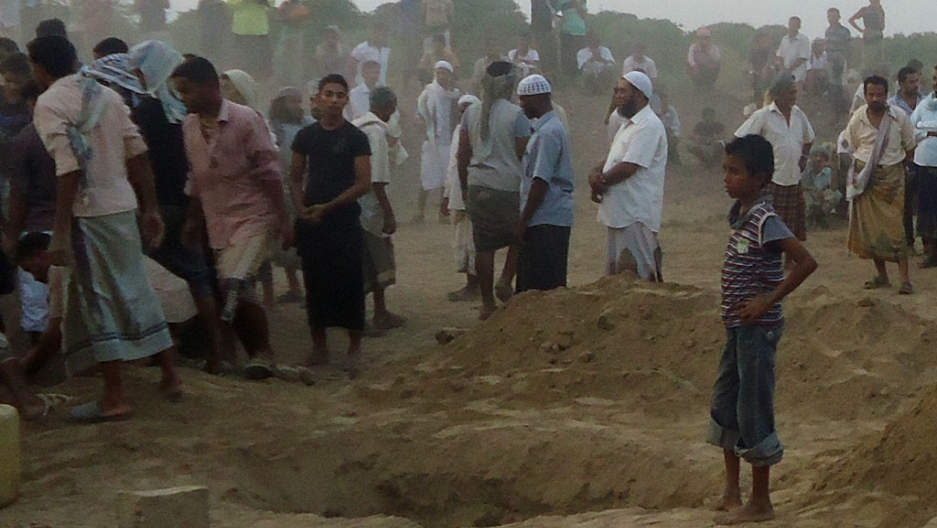 Onlookers gather at the scene of a suicide bombing in Abyan on August 5, 2012. The suicide attack blamed on Al Qaeda in Jaar, one of a string of towns in Abyan province that were retaken by government troops in June after being held by Al-Qaeda loyalists for more than a year, killed 45 people, local officials said, as residents voiced fears that a lack of security personnel on the ground will allow the jihadists to return.
Credit: -
Share

Weeks after Yemen declared victory over Al Qaeda in a southern province, a suicide bomber killed 45 and injured dozens more at a funeral there late Saturday, government officials said.

A tribal military leader who co-operated with the Yemeni army appears to have been the target.

“This is a cowardly, criminal, terrorist attack,” Abyan governor Jamal al-Aqel said on a government website, according to Reuters.

The government and tribal groups said in June they had rooted out extremists from their hiding places in Abyan, a southern province.

Years of protests against former president Ali Abdullah Saleh allowed Al Qaeda in the Arabian Peninsula to gain a foothold.

But Hadi has promised to eliminate Al Qaeda from the country.

“A number of individuals from these gangs took refuge in the mountains next to the north of Jaar after the big defeat they were dealt by the army and Popular Committees,” state news agency Saba reported, according to Reuters. “Today they resume their cowardly suicide operations”.

Yemen’s government has blamed Al Qaeda for the attack in the city of Jaar, Agence France-Presse said.

Witnesses reported the blast was so powerful that it sent bodies flying.

After two months of fighting, Yemeni forces retook Jaar and the Abyan capital of Zinjibar from Al Qaeda in June.

However, fighting renewed this week when two soldiers and a civilian died during an attack at a police station, The Associated Press reported.

"A drone fired two missiles at an all-terrain vehicle ... killing its five occupants, all members of Al Qaeda," an official told AFP.