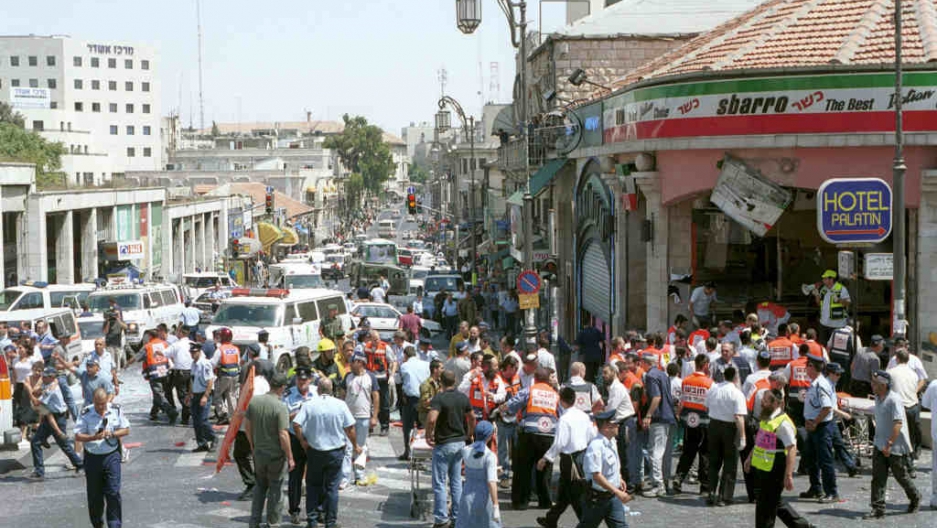 At least 18 people, including six children, were killed in a Palestinian suicide bombing in 2001 at a Sbarro's pizzeria on Jaffa Street. Now, it's one of the sights tourists can see on "From Trauma to Fantasy: a tour following terrorist attacks on Jaffa Road."
Credit: Staff
Share

JERUSALEM — According to Yossi Atia, Jaffa Road in Jerusalem is the most terror stricken street in the world.

That may well be the case. At least a dozen major attacks have taken place along the road since the 1960s.

Though the city has expanded and stretched in all directions, and other streets draw greater crowds on summer nights, Jaffa Road remains among the most evocative and symbolic of Jerusalem's many landmarks.

To bring a sense of history and contemplation to the bustling thoroughfare, Atia, a 33-year-old Tel Aviv-based performance artist, has developed "From Trauma to Fantasy: a tour following terrorist attacks on Jaffa Road."

On the tour Atia uses the trope of tourists being guided. He wears a clip-on microphone and wears the classic Israeli tour guide uniform of Teva sandals, a loose checked shirt and khaki shorts. At least, his alter-ego does. As a guide, he identifies as "Ronen Matalon," who is very difficult to distinguish from Atia.

More from GlobalPost: Israel's version of the Tea Party

Throughout, someone is filming. It may well be that Atia has an ulterior motive. It is unclear to what extent the Jerusalem performance is an autobiographical catharsis, or whether participants are unknowingly taking part in a future film examining their reactions to terror.

Until now, Atia’s career has been characterized by satire and irony, especially short videos that mock sacred Israeli conventions.

In one, he and a friend dress in uniform on the day of an annual fundraiser for soldiers' wellbeing. They knock on unsuspecting citizens' doors asking for what he describes in a voiceover as "handouts for the richest organization in this entire country."

In another, he sets up a fake Israeli-Egyptian border on the Tel Aviv promenade, playing the role of a Sudanese refugee set upon by regular passersby who he recruits to play border police.

Atia’s two-hour terror walk covers the life of a young man growing up in the 1990s, when things were "quiet, with just an average of one terror attack per year." It continues into the early aughts and the Second Intifada, when terror attacks came around every corner.

Speaking in character, Atia says his principal aim is to encourage an interactive tour, to get people to speak up about what is in fact, the unspeakable.

At one stop on the tour, at the corner of Jaffa Road and King George V Street, a newish bakery takes the place of Sbarro's pizzeria. In 2001, a suicide bomber carrying an explosives-laden guitar case blew himself up here, killing 15 and wounding 150 people.

More from GlobalPost: Q&A: What conscription for the ultra-Orthodox means for Israel

A young couple, not even 20 years old, said they never knew a time before "all this hatred." They said they find the tour eye opening.

But Josef Shrinzak, 50, a performance and sound artist, expressed disappointment "in the lack of a real alternative narrative."

"I expected to be able to deal with an interesting, complex story. Instead, it’s a simple narrative with nothing in it, the happy '90s where we listened to Nirvana — and then, the mean 2000s. But there is no real trauma, nothing really sticks and nothing is revealed."

Itay Maunter, the artistic director of the Jerusalem Season of Culture, agrees there is indeed more to the tour than Atia is letting on.

"We live in a world in which every work of art has more than one aspect,” Mautner said. “So I think he'll make something with the film."

Atia won’t be mocking people's reactions, though, according to Mauntner. "He isn't laughing at anyone. He is taking things to an extreme in order to point out their absurdity."

Atia himself once lived on Jaffa Road, and experienced his first terror attack simultaneously on TV and on the street, seeing it from his balcony. The tour takes on a whimsical quality as he, or his alter-ego, details the ancient synagogue where he studied for his bar mitzvah, and the romantic alleyway where he first kissed a girl.

The tour was inaugurated for the Hebrew-speaking public this week under the umbrella of "Under the Mountain: A Festival of New Public Art," a citywide undertaking to bring politics and art into the public sphere.

"Atia's aim is essentially to show that the situation of such terror is itself absurd,” Mauntner said. “He is trying to ask us questions about our own process, our attempts to return to a normal state. What is denial and what is a natural process?"

Atia was unavailable for questioning after the tour.

At one stop, Atia pulled out a dry-erase board and drew a chart on it with variables that included how many people were killed in an attack, where the attack took place, and whether it was acceptable to either go out for a beer there or invite a girl out on a date.

"I lived in Jerusalem during those years," Mauntner said. "We tried to live normal lives, dating, kissing. But the fact is we made those calculations."

The question remaining, of course, is whether members of the public who signed up for the tour knew their absurd-o-meters were being tested.