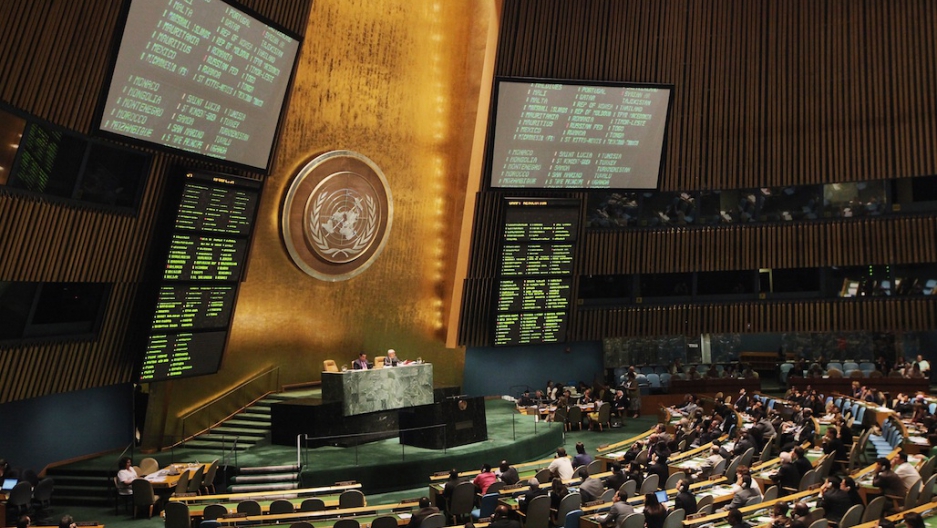 The United Nations General Assembly votes on a resolution on Syria at the UN headquarters in New York City on August 3, 2012.
Credit: Mario Tama
Share

The United Nations General Assembly overwhelmingly passed a non-binding resolution on Friday faulting the Security Council for failing to end the violence in Syria. Drafted by Saudi Arabia, the resolution also denounced Syrian President Bashar al-Assad, and was intended to pressure him to cede power to a transitional authority, the Christian Science Monitor reported.

The resolution followed yesterday's announcement that former UN Secretary General Kofi Annan will leave his post as the head of the UN observer mission in Syria at the end of this month.

French representative Gérard Araud, who currently holds the rotating presidency of the UN Security Council, said that he doubts the observer mission in Syria will last through August, according to a statement. "The divisions in the Council are very deep. I think it’s irreconcilable in political terms,” he wrote. “I think the mission will disappear on 19 August.”

However, Araud expressed his hope that the 15-member Security Council would pursue humanitarian aims in Syria, where three million are now in need of emergency relief. The Council's five permanent members — China, France, Russia, the United Kingdom and the United States — hold the ultimate power to veto or unanimously approve resolutions.

“Some countries have drawn the conclusion that it’s over, that the Council is impotent on Syria. We would like to at least prove in the humanitarian arena, which is becoming more and more serious, that the Council can act,” Araud said.

In remarks to the General Assembly today, UN Secretary General Ban Ki-Moon urged the international body to find a solution. "We face the grim possibility of long-term civil war destroying Syria’s rich tapestry of interwoven communities. This would have tragic implications for Syria’s people and could affect stability across the region. We must not let this prediction come true," he said, according to a press release.

Where does the UN mission in Syria go from here? GlobalPost asked Robert Jervis, an international relations theorist and professor of international politics at Columbia University, to weigh in on today’s events at the UN and Syria's immediate future. The following is an edited version of the exchange.

Is it common for the General Assembly to pressure the Security Council in the way they have through this resolution?

I think the GA resolution is unusual — and it also is unusual for Saudi Arabia to take the initiative. I'd love to know the back story and what the US role was. But while it adds a bit of pressure on Russia, I doubt if it will make much difference.

Do you have an opinion on where the UN mission might go from here?

I'm away from my office and haven't been following the events terribly closely, but my sense is that the UN is just going through the motions. It can only have much impact when the [five permanent members are] united or when there is room for some independent initiative by the Secretary General. Kofi Annan gave it a good try, but as he realized from the start the odds were against him.

What does your research tell you about the situation in Syria? What action would you recommend at this moment?

Alas, the history of civil wars leads me to doubt a negotiated settlement, although I urged my former students in the government to work for one that included much of the Allawite elite (although of course not Assad). But such settlements are notoriously hard to arrange — the conflict of interest, suspicions, and difficulties in enforcing any agreements are obvious. Indeed, as you know, the "opposition" itself is not an "it" but a "they," and likely to fight with itself once Assad is forced out. So I think we should expect prolonged conflict, with the separation of an Allawite region not out of the question.

More from GlobalPost: Syria's Plan B: An Allawite state?