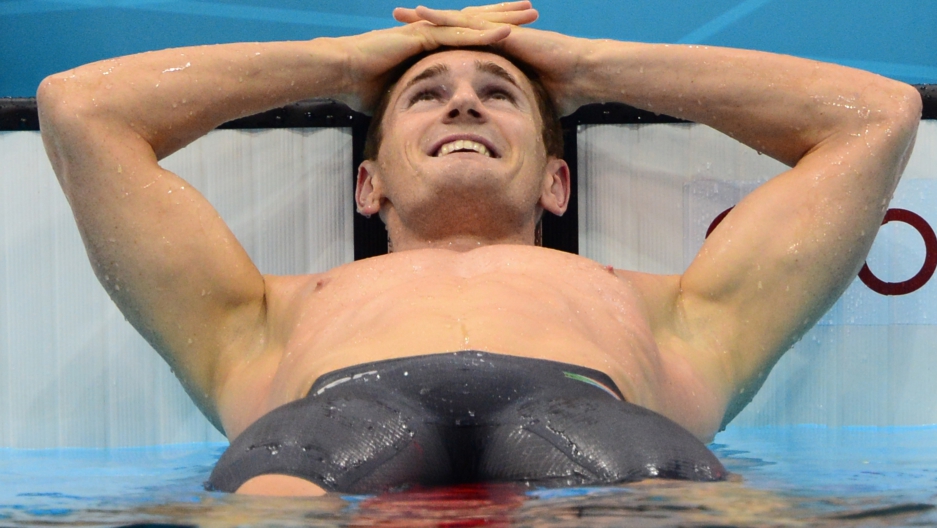 South African breaststroke gold medalist Cameron van der Burgh has admitted to cheating at the London Olympics, saying he couldn't afford not to because almost everyone does it.

Van der Burgh came under scrutiny after underwater footage shows him performing three "dolphin kicks" at the race start — illegal under FINA rules, which permit only one on starts and turns.

He went on to win the 100 meter breaststroke final in of 48.46sec, breaking Australian Brenton Rickard's world record, according to The Australian.

The Australian swimming team has complained publicly about van der Burgh's use of the multiple dolphin kick.

Aussie Christian Sprenger took out the silver medal in the 100m breaststroke final.

However, FINA does not use underwater or video technology to make its rulings, so there is no avenue for anyone to protest the result, Australia's Fairfax media reported.

But van der Burgh said a lack of underwater technology to police the rules meant swimmers knew they could get away with it, and he accused the veteran Rickard of doing the exact same thing in the final.

"I think it's pretty funny of the Australians to complain because in the underwater footage if you actually look at Brenton Rickard in the lane next to me, he's doing the exact same thing as me yet they're turning a blind eye," van der Burgh said.

"I think every single swimmer does that," he continued.

"At the point of time before the fly kick was legal, [Kosuke] Kitajima was doing it and the Americans were complaining."

He continued: "It's got to the point where if you're not doing it you are falling behind or giving yourself a disadvantage.

"Everyone is pushing the rules and pushing the boundaries, and if you're not doing it you are not trying hard enough."

Van der Burgh said a World Cup event in Sweden used the underwater technology and "it was really awesome, because nobody attempted it [the dolphin kick]" and "everybody came up clean and we all had peace of mind that nobody was going to try."

"I’m really for it. If they can bring it, it will better the sport. But I’m not willing to lose to someone that is doing it," he added, according to Fairfax.

Rickard told Fairfax he had seen the footage and agreed with van der Burgh's suggestion that technology be used to police the rules.

"I'm not going to comment on whether it is cheating or whatever, but the rules are there to be enforced and the reason out of competition drug testing occurred was to deter cheaters as much as to catch them and if you increase the chance of catching cheaters then you are going to deter people from doing it," Rickard said

"So, I mean, to me it would make sense that referees have the chance to look at underwater footage and say there is something wrong there. If that rule was put in place, everyone would be much more straight down the line and that’s ultimately what we want for the sport is to have a sport with integrity where it is very hard to cheat and people I guess need to avoid cheating because sooner or later they will get caught and cost themselves dearly."