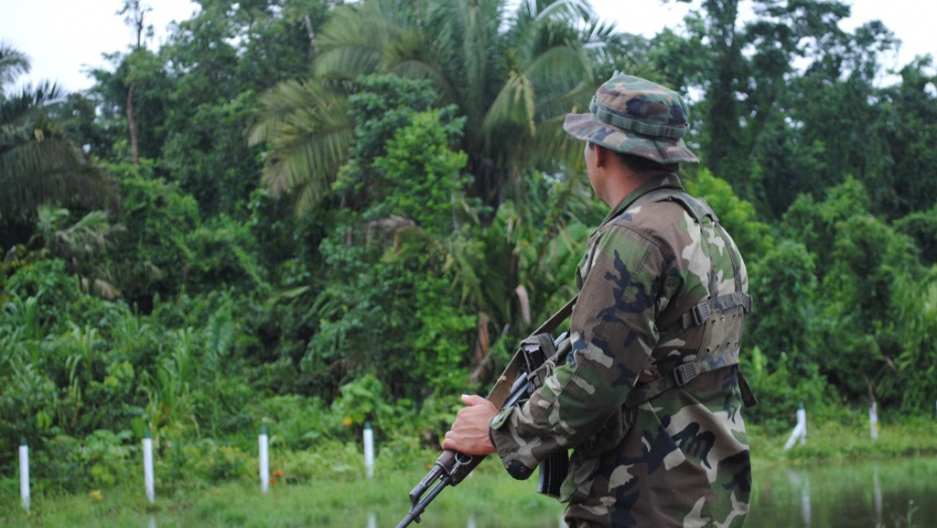 Are the contras out there? The Nicaragua Army, such as this soldier watching thick jungle, claims publicly that there is no threat of a re-armed contra movement. But troops are reportedly searching for rebels.
Credit: Tim Rogers
Share

Editor’s note: This article is part of the in-depth series “Nicaragua Rewind,” a look at whether the Central American country is repeating its troubled past under the second coming of Sandinista President Daniel Ortega. It is presented in partnership with the Pulitzer Center on Crisis Reporting.

MIAMI, Florida, and JINOTEGA, Nicaragua — “Emilio” was only 12 when he joined the US-backed Contras in 1984 to wage war against Nicaragua’s revolutionary government of the Sandinista Front for National Liberation (FSLN) — seen by the Reagan administration as a Soviet ally, and therefore a Cold War foe for the US.

Twenty-eight years later, the former child soldier says a “second dictatorship” of President Daniel Ortega has prompted him to take up arms again.

Emilio says he’s not alone. He says enlistment in a self-proclaimed, rearmed Contra movement has allegedly grown to a fighting force of 1,600 men who operate in small cells throughout Nicaragua since Ortega sidestepped the constitution to win re-election last November.

“We're repeating the 1980s,” Emilio said in a phone interview from an undisclosed location “somewhere along the Nicaraguan-Honduran border.”

Emilio, who was reached on a Honduran cell phone number provided by a Contra contact in Miami, claims to be one of 24 guerilla comandantes. They say they’re organizing covertly in Nicaragua and politically in Miami, where the “Comando Central Resistencia Nicaragüense USA," a Florida-registered nonprofit, is raising funds.

Emilio says the rearmed Contras — or “recontras” — have engaged in a half-dozen gunfights with the Nicaraguan Army in the past seven months. The clashes allegedly resulted in 20 casualties — and an equal number of alleged cover-ups by a government that denies the rebels' existence.

Nicaraguan Army Colonel Juan Ramon Morales denies the claims. He says tales of new Contras are “fantasies” peddled by desperate political adversaries “who don’t understand or accept the reality of the country today.”

Col. Morales acknowledges Nicaragua’s northern border is too vast to patrol completely. “We would have to put a soldier every 10 meters to have total control, and we don’t have that capacity," he says. But he insists the army's intelligence would have detected the presence of hundreds — if not thousands — of guerrillas skulking about in the mountains.

“We have very good sources of information and haven’t picked up any information about armed groups," he says. "We’ve only detected bands of common delinquents."

Others disagree. Roman Catholic Bishop Juan Abelardo Mata has been warning about the reappearance of armed groups in Nicaragua since 2010. The priest says the situation is “getting worse” and that the government’s continued denial of a guerrilla presence represents a “terrible deafness” to the problems in the northern countryside.

“The situation is delicate,” he says. “The government knows it has generated this problem, but they don’t want to admit it.”

“The risk is real,” echoes former Contra commander Guillermo Miranda. “The army and the police are selectively executing various members of the resistance who have opted for armed struggle.”

Some of the Contras’ claims are clearly exaggerated. An infamous YouTube manifesto by someone posing as a rearmed Contra leader appears to be comically counterfeit. But several murders over the past 16 months suggest more may be going on than the government admits.

Two self-proclaimed Contra commanders have been killed. “Comandante Yahob” was a CIA-trained covert operations commando who vowed to “remove Ortega from office with bullets” in 2010. He was killed by an unidentified sniper last year.

Earlier this year, Yahob’s self-proclaimed successor, a former guerrilla known as “Pablo Negro,” was found murdered in a ditch in Honduras.
The Army denied responsibility in both cases and says the victims were “common delinquents” who were killed by other criminals.

The Contras say they’ve since reorganized under the new leadership of a commander codenamed “El Sheriff,” who alternately goes by the nom de guerre, “Walter.”

Although Nicaragua is considered Central America's safest country, several other incidents have appeared very much like political violence.

In the rural community of Luku Paraska, Mulukuku, last December, eight men wearing rebel uniforms and carrying AK-47 assault rifles dragged Sandinista political secretary Carlos Ali Garcia out of his home and shot him 11 times. Then they spray-painted his house with an old Contra slogan: “God, Country, Democracy, Liberty or Death,” as well as the ominous message: “This is the result of stolen elections.”

In early March, eight people were killed and two others seriously injured in a Contra-style ambush in the rural municipality of La Cruz de Rio Grande.

None of those incidents have been fully resolved. The government blames the violence on cattle rustlers and other bands of delinquents, but insists none of the violence is politically motivated.

Many are skeptical of a recontra insurgency. Some believe the rumors of re-armament to be nothing more than chain rattling by ghosts in Nicaragua’s attic. Doubters say these could be figments of a collective post-traumatic stress disorder, resulting from the brutal 1980s war that left more than 30,000 dead, tens of thousands injured, and families torn apart and impoverished.

Journalists’ efforts to track down the alleged Contra commanders in the mountains have failed to produce any irrefutable evidence of rebel activity. Independent defense experts are also leery.

Roberto Orozco, a Nicaraguan security analyst at the Managua-based, independent Institute for Strategic Studies and Public Policy, says a fact-finding team recently went into the mountains to quietly investigate a lead from “a reliable source” who had claimed a new generation of Contra rebels was receiving training, weapons and uniforms. The team came back empty handed after 10 days of searching.

“We don’t think there are rearmed groups,” Orozco says.

The expedition was not alone in the mountains. Orozco says 2,000-plus Nicaraguan soldiers deployed to protect the annual coffee harvest were also searching for Contras.

“The [soldiers] were going door to door in the rural areas asking farmers if they have seen rearmed Contras,” Orozco says.

In Miami, Nicaraguan exile Enrique Castillo is one of the few public faces of the mysterious anti-Sandinista group. The 55-year-old is known by some as the singer-songwriter who composed “Comandos de la Libertad,” the Contras’ anthem of the 1980s. (The following is a video posted to YouTube probably by present-day Contra supporters.)

Now the longtime Contra collaborator is the US representative for the Nicaraguan Resistance, according to a rebel communiqué, which is ambiguously datelined “From the mountains of Nicaragua.”

Castillo insists journalists, fact-finders and soldiers haven’t been able to find the rearmed rebels because the rebels don’t want to be found — not because they don’t exist.

Castillo’s role, on the other hand, is to be visible. In the past two months he’s sent letters to several Republican lawmakers, including Senator Marco Rubio and House Foreign Affairs Committee Chairwoman Ileana Ros-Lehtinen, to inform them about the recontras’ efforts and try to drum up support in Washington. Several US officials told GlobalPost they’ve received overtures from the Contras, but are not interested in repeating the ‘80s.

(In the photo to the right, Enrique Castillo is seen on his cell phone in Miami. Tim Rogers/GlobalPost.)

That hasn’t stopped Castillo and others from trying.

“There are more than 10,000 comandos who want to take up arms but due to the lack of resources and logistical support, they have not ventured to go to war,” Castillo wrote in his letter to Sen. Rubio last May. “I understand that this is a very delicate decision for the US government, which insists on maintaining diplomatic relations with the unconstitutional and illegal Nicaraguan government of Daniel Ortega.”

While Castillo says US law limits his organization from “making war in another country,” he talks about insurrection in Nicaragua as if it’s already a foregone conclusion.

“I want liberty in Nicaragua, and there is no option other than armed struggle,” says Castillo, switching back and forth from English to Spanish, often in the same sentence. “War is the only option in Nicaragua.”

Searching for meaning in the past?

Martha Cabrera is a Nicaraguan trauma expert and author of “Living and Surviving In a Multiply Wounded Country.” She says there are definite indications that many Nicaraguans are suffering from “collective trauma” after a tumultuous decade that sent 100,000 people to war and then skipped a national reconciliation process afterward.

But Cabrera thinks Nicaragua’s condition is “more complex” than that. The country is also suffering from a “collective identity crisis,” the psychologist postulates.

“Tens of thousands of Nicaraguans went from being heroes in the 1980s to being unemployed after the war. Their world fell apart,” Cabrera says. “Now many people are taking refuge in the past to try to make sense of a society that no longer makes sense.”

Yet for all of modern-day Nicaragua’s unresolved childhood issues, Cabrera says she remains hopeful that the country will find a way to shoulder forward peacefully without returning to the past.

“I believe in Nicaragua, despite everything,” she says. “People here are survivors.”