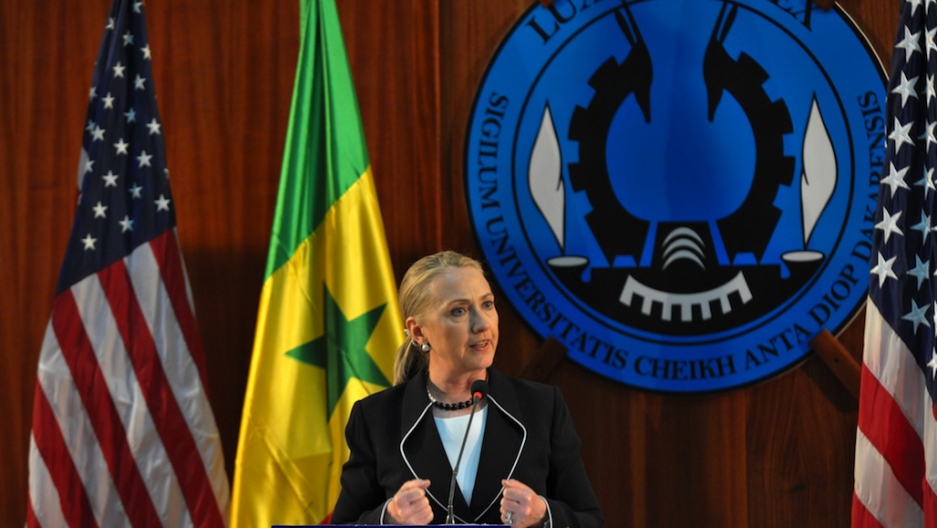 US Secretary of State Hillary Clinton spoke during a press conference at Dakar University in Senegal on August 1, 2012, as she began an 11-day trip in Africa focusing on peace, security and development.
Credit: SEYLLOU
Share

From the South Sudanese capital of Juba, US Secretary of State Hillary Clinton called on South Sudan and Sudan to resolve heated disputes that threaten security between the two countries, Voice of America reported.

In particular, Clinton emphasized the need for the two to find agreement on how to share oil revenue, according to VOA. Disputes over the use of pipelines earlier this year brought the countries "to the brink of a full war," Reuters said. The lack of resolution since has cost both of the countries economically, as each relies heavily on revenues from oil.

"This is a delicate moment...Now we need to get those (oil) resources flowing again," Clinton told reporters after a meeting with the South Sudanese President, according to Reuters.

Clinton's trip was the highest-level visit to the new country of South Sudan since it was formed last year. According to McClatchy, the secretary of state's wider mission in South Sudan was "to reset a foundering relationship with a country that at its creation in July 2011 seemed set to be the U.S.’s newest friend in Africa."

At a joint news conference with Clinton, South Sudan's foreign minister, Nhial Deng Nhial, said that his country had made a "generous offer" to Sudan, according to Reuters, which included a higher oil transit fee and a $3.2 billion package to compensate for oil loss.  "We hope the international community, with the U.S. leadership, can persuade the Republic of Sudan to accept that," Reuters quoted Nhial as saying.

But negotiations to date have not been fruitful. Clinton's visit to South Sudan coincided with the expiration of a UN Security Council deadline for Sudan and South Sudan to reach a peace accord.

Clinton is on an 11-day trip to Africa. She will travel to Uganda Kenya, Malawi and South Africa before returning to the United States.