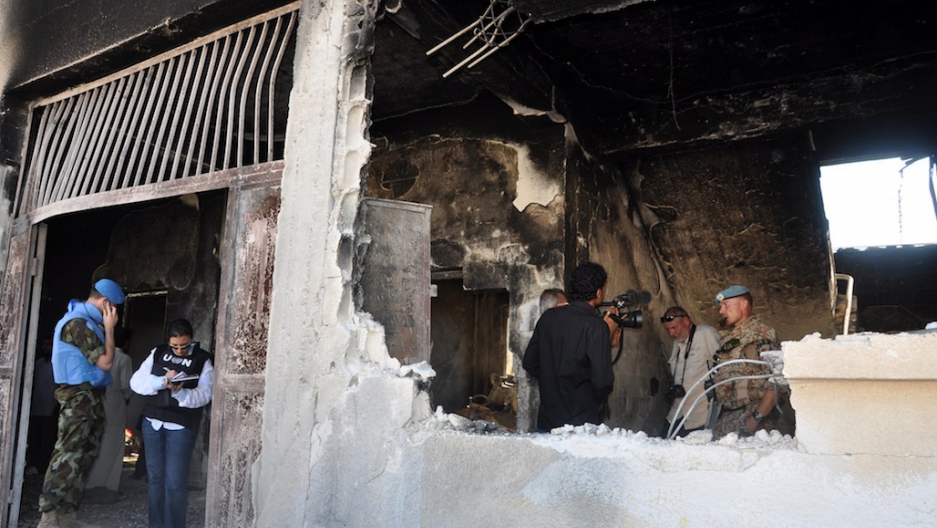 UN observers inspect a bombarded school on July 14, 2012 in the Syrian village of Treimsa, in the central province of Hama, where more than 150 people were killed last month. Local residents reported August 2, 2012 that 50 people had been killed in the city of Hama by the Syrian army.
Credit: PIERRE TORRES
Share

Syrian forces have killed at least 50 people during clashes with rebels in the city of Hama, Reuters has reported.

Reuters cited activists and residents as the source of the figure, which was said to include members of three different families. One resident told the news agency that the army killed the residents during a raid of the Arbaeen neighborhood.

More from GlobalPost: Kofi Annan quits as envoy to Syria

Annan's peace plan for Syria was never fully implemented by either the rebels or the Syrian army, and he left "frustrated by the seemingly intractable Syrian conflict," according to The New York Times. In his parting remarks, Annan also criticized the UN Security Council for holding up a serious process toward peace and political resolution of the conflict in Syria, the Times reported.

Also on Thursday, Syrian rebels used a captured army tank to shell an airport near Aleppo. It was the first reported instance of rebels using heavy weapons that they have captured from the army during weeks of fighting.

More from GlobalPost: Inside Syria: The battle for tenth street