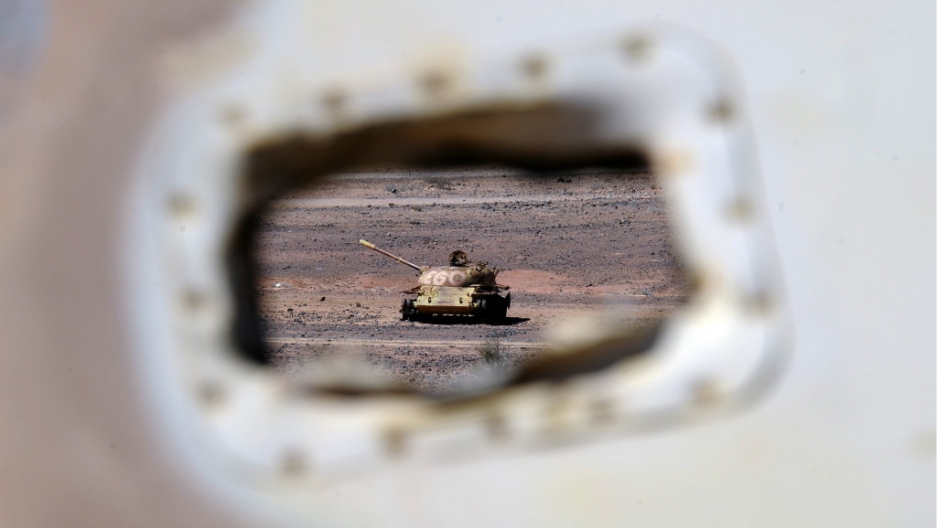 The wreckage of a Morrocan tank is pictured near the Western Sahara village of Tifariti. Western Sahara is a former Spanish colony which was annexed in 1975 by Morocco. The Polisario Front, backed by Algeria, wants independence for the territory on the west African coast.
Credit: Dominique Faget
Share

SAN FRANCISCO — Earlier this year, Global Post ran an article by Jordan Paul, executive director of the Moroccan American Center for Policy, a registered foreign agent for the Moroccan government, which funds, supervises, and coordinates the group’s activities. The article contained a series of demonstrably false claims attempting to rationalize for Morocco’s illegal occupation of its southern neighbor, the country of Western Sahara.

In 1975, the kingdom of Morocco conquered Western Sahara on the eve of its anticipated independence from Spain in defiance of a series of UN Security Council resolutions and a landmark 1975 decision by the International Court of Justice upholding the right of the country's inhabitants to self-determination. With threats of a French and American veto at the UN preventing decisive action by the international community to stop the Moroccan invasion, the nationalist Polisario Front launched an armed struggle against the occupiers. The majority of the indigenous population, known as Sahrawis, went into exile, primarily in Polisario-run refugee camps in Algeria.

Thanks to U.S. and French military support for the conquering Moroccan forces, Morocco was able to hold on to most of Western Sahara. Yet the Polisario achieved a series of diplomatic victories that generated widespread international support for self-determination and opposition to the Moroccan takeover. In 1991, the Polisario agreed to a ceasefire in return for a Moroccan promise to allow for an internationally supervised referendum on the fate of the territory. Morocco, however, recognizing they would almost certainly lose such a plebiscite, refused to allow the scheduled vote to move forward.

French and American support for the Moroccan government blocked the UN Security Council from providing the necessary diplomatic pressure to force Morocco to allow the promised referendum to take place. The Polisario, meanwhile, recognizing its inability to defeat the Moroccans by military means, decided against resuming the armed struggle. As a result, the struggle for self-determination shifted to within the Moroccan-occupied territory, where the Sahrawi population has launched a nonviolent resistance campaign against the occupation, which – despite widespread Moroccan repression – has sporadically continued.

In an effort to justify their ongoing defiance of the international community for their illegal occupation, the autocratic Moroccan monarchy has redoubled its efforts to discredit their opponents, such hiring people like Paul to write articles like those that appeared in the Global Post in March.

Among Paul’s more bizarre claims is that the Polisario Front has links to Al-Qaeda in the Maghreb (AQIM.)

In reality, though Sahrawis are virtually all Muslims, they historically practice a decidedly liberal interpretation of the faith. The Polisario has since its founding been a secular organization, based on the belief that religious faith is between the individual and God, not a government or other temporal organization. Women have taken prominent positions in leadership. Meanwhile, radical Islamists in Algeria have condemned them for their secular ideology and even attacked Polisario offices.

Even during the twenty years of armed struggle, the Polisario never engaged in terrorism or any kind of deliberate attacks against civilian targets. And there has been none since.

Furthermore, the autocratic Algerian regime controls security around the refugee camps, which are located in the heavily-militarized region of Tindouf. After surviving a bloody decade-long civil war against Islamist extremists, the idea that the Algerian government would allow any group collaborating the AQIM to operate in such a sensitive area is pure fantasy.

While there are some legitimate concerns regarding some of the practices of the Polisario leadership in the camps, no credible independent analysts have documented Paul’s claims that the Polisario has been involved in “arms and drug trafficking, armed incursions into Mali, fighting as Gaddafi mercenaries in Libya, and kidnappings for AQIM in the Sahel.”

Contrary to Paul’s claim, the Polisario Front is not a “separatist” group. It is the ruling party of the nation of Western Sahara – known officially as the Sahrawi Arab Democratic Republic – which has been recognized by over 80 countries and is a full member state of the African Union. Western Sahara is recognized by the United Nations and virtually the entire international community as a non-self-governing country under foreign belligerent occupation.

And, contrary to Paul, the Polisario does not “force” the refugees to live in the camps. As someone who has visited both the camps and Moroccan-occupied parts of Western Sahara, it is clear that they are there to escape Moroccan repression in their occupied homeland, repression that has been well-documented by Amnesty International, Human Rights Watch, and other reputable human rights groups.

As with Indonesia’s occupation of East Timor, Israel’s occupation of the West Bank, and Iraq’s short-lived occupation of Kuwait, there are those who will try to justify illegitimate foreign occupations by making up such bizarre stories. However, it doesn’t mean they should be taken seriously.

More from GlobalPost: Lesbians in Morocco: Should we stay or should we go?

Stephen Zunes is a professor of Politics and chair or Middle Eastern Studies at the University of San Francisco. He is author, along with Jacob Mundy, of Western Sahara: War, Nationalism, and Conflict Irresolution (Syracuse University Press, 2010)