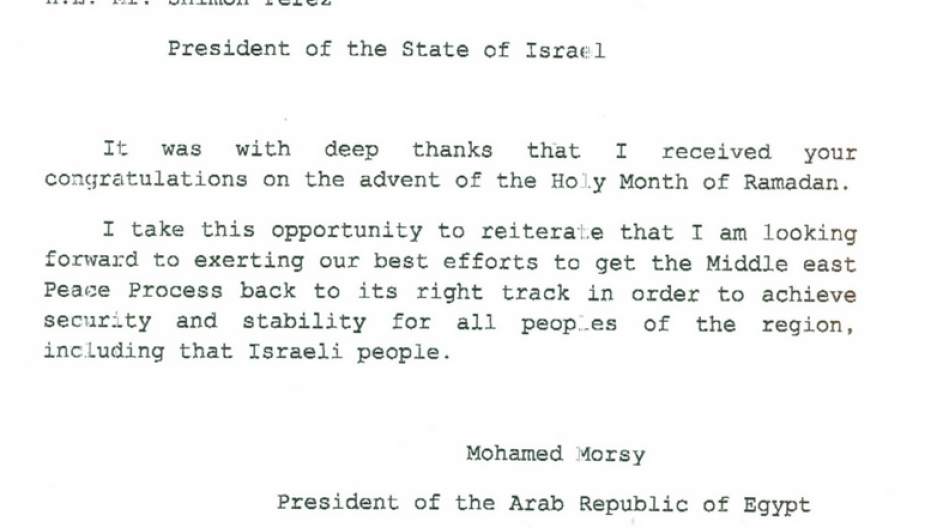 This letter was purportedly sent by Egypt to Israel, and if true signals a positive development in relations between the two countries.

Israel says it has received a letter from the new President of Egypt, Mohammed Morsi, saying he wishes to work with Israel for peace and stability in the region.

But Cairo says it’s a fake.

The initial reaction to the letter in Israel was one of relief. Israel is surrounded by difficulties, what with the perceived danger of Iran’s nuclear program, and civil war next door in Syria.

There has also been concern over the southern border, as Egypt’s new leader is a former leading figure in the Muslim Brotherhood.

About a month ago, Israeli Prime Minister Benjamin Netanyaho wrote a letter to Morsi, congratulating him on his electoral victory and wishing him a blessed Ramadan.

Earlier this week, the Egyptian Embassy passed to Israel a letter, signed by Morsi, thanking President Shimon Peres for Israel's letter and expressing his hopes for a resumption of the Middle East peace process.

"I am looking forward to exerting our best efforts to get the Middle East peace process back to its right track in order to achieve security and stability for all peoples of the region, including [the] Israeli people," Morsi wrote, according to various reports.

But now Egyptian authorities are trying to back away from the message, calling it a hoax.

"Everything that was reported in the Israeli media regarding the letter does not correspond to reality," Egyptian spokesman Yasser Ali said in a statement.

Israeli officials say they're confused because, not only did the letter come through official channels, but the Israeli Embassy in Cairo was notified of the letter by authorities in Egypt, Israelis said.

But some officials in Jerusalem have a simple explanation. Of course the Egyptians had to deny it, they say.