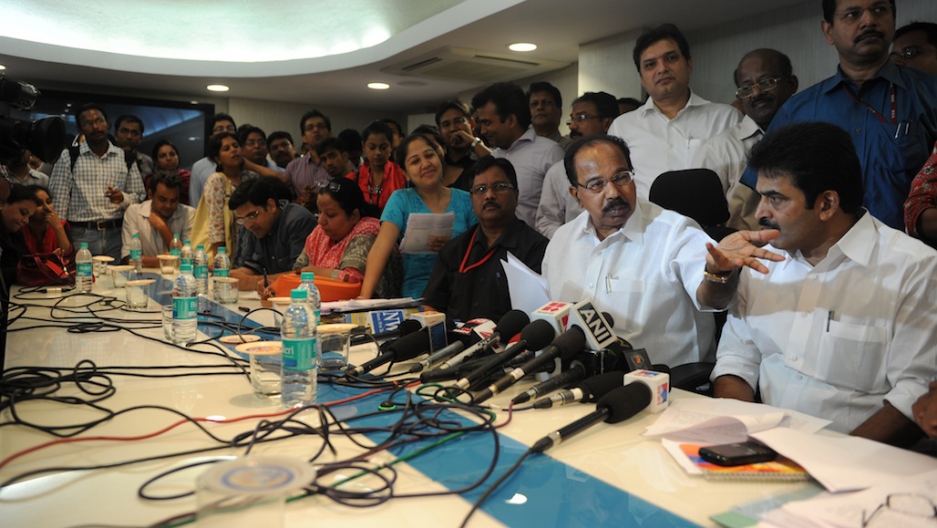 After two days of massive blackouts, electric power was restored to India on Wednesday.

But, if local press reports are any indication, faith in the country's political establishment was not.

In a roundup of coverage from India, the BBC dubbed the reaction to the outages by India's mainstream press as “unanimously scathing.” Blackout Monday was followed by Terrible Tuesday, in the words of The Hindustan Times. The choicest headlines included wordplays with "power" — "Powerless and clueless," said The Times of India; "Superpower India, RIP," wrote The Economic Times — that got to the heart of dissatisfaction with political leaders.

It didn't help that the power minister, Sushil Kumar Shinde, was promoted in the midst of the crisis, or that he took the opportunity to sum up his own performance heading the power ministry as "excellent." The move, and its timing, "hardly indicated seriousness on the government's part in dealing with the crisis," wrote The Times of India.

Reactions on Twitter from some journalists, activists and citizens took a similar tone.

Old adage: nothing succeeds like failure in politics. Shinde is a good example. Promoted on a day of a power crisis.

Chidambaram gets Finance. Moily gets Power. Shinde gets Home. India gets screwed.

From his new post as home minister, Shinde on Wednesday blamed the outages on state governments overloading their grids. However, his replacement, Veerappa Moily, was cautious in assigning fault. "I don’t think one can have a blame game between the state and the center,” The New York Times quoted Moily as saying. Still, Moily affirmed: "We have an excellent system," according to the Washington Post.

The outages occurred after three of India’s five power grids failed, causing massive blackouts across vast swaths of the country's north, east and north-east. While overloading is one likely culprit for the failure — Time noted official statistics that cite an annual power shortfall in India of 8 percent — the scorn now being flung at politicians indicates exasperation with problems of governance, not grids.

More from GlobalPost: India: Is privatizing power the answer?

Just how persistent and systemic those issues may feel to ordinary Indians was summed up nicely in a satirical column in The Wall Street Journal, whose title declared that 1.2 billion Indians — in other words, the whole country — was "Hit by Leadership Outage."

While we're on the subject of scope of impact, here's a note for the record: though it's been widely reported that about half of India — 680 million people — lost power in the grid failures, that figure overestimates the impact in an important respect, according to The Wall Street Journal. After performing some astute calculations with 2011 census data, the Journal noted that less than half of the people who live in northern and eastern areas hit by the outages actually had power to lose. Only about 323 million of residents in those areas live in electrified homes.

"For the rest, it was darkness as usual (metaphorically speaking, of course, since the blackout began at lunchtime)," the Journal said. However, it's likely that even residents whose homes are not electrified could have felt the impact of outages, considering the massive toll of the blackout on trains, traffic lights, and other public services.