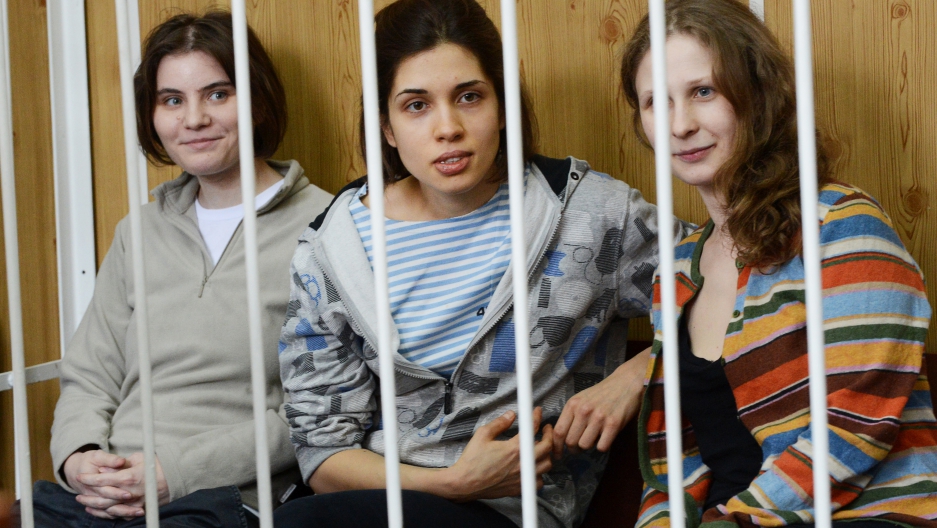 Today at Moscow's Khamovnichesky District Court three members of the Pussy Riot protest group were convicted of hooliganism motivated by religious hate and sentenced to two years in prison.

The presiding judge, Marina Syrova, said the women had "crudely undermined social order" when they performed their anti-Putin song "Virgin Mary, Redeem Us of Putin" in the Church of Christ the Savior in Moscow last Feb.

Here's an Aug. 1 interview GlobalPost did with Rachel Denber, the deputy director of Europe and Central Asia at Human Rights Watch, on abuse in Russia's detention centers and what this case says about Putin's new presidency.

This interview was edited and condensed by GlobalPost.

Defense lawyers have said members of Pussy Riot—Maria Alekhina, Ekaterina Samutsevich and Tolokonnikova—have been deprived of adequate sleep and food. Is such abuse common in Russian detention centers?

Even though there have been some improvements in the past, there are still some very serious problems in Russian detention centers, especially in pre-trial detention centers, which are usually very overcrowded. I think that does result in sleep deprivation and it does result in other irregularities. I think what the lawyers are saying does not stretch the imagination.

Will these allegations of abuse affect the outcome of the Pussy Riot trial? What do they say about how the government is treating this case?

I don’t know that issues like sleep deprivation and irregular food would affect the outcome of the trial. This is a very, very high profile trial at this point, and I think that there have been in the past decade serious and well-grounded concerns about the independence of the Russian judiciary.

I think in cases like this it’s very difficult for the judge to make an entirely independent ruling.

Can you talk about other cases in which dissidents were abused?

Sergei Magnitsky. He was a lawyer and kind of an accountant for Hermitage Capital. He was a whistleblower. He found that there were a group of authorities trying to swindle tax monies, and he got thrown in jail. He actually died in jail. He had a serious medical condition and it wasn’t looked into. He was badly abused.

Are police pressured by their superiors to abuse defendants? Do police hide their abuse of prisoners, or do they operate openly with impunity?

I can’t say if that’s the case with Pussy Riot. But I think that generally it’s the case that if prison officials are told they need to exert a little more pressure on certain inmates waiting for trial then I think they would do it. I think that’s what happened in the Magnitsky case.

Is there accountability or judicial safeguards to prevent the abuse of defendants?

What does the Pussy Riot trial say about Putin’s new presidency, and the current protest movement?

I think these women have been singled out for especially harsh treatment to send a very, very strong message to people who make daring stunts and who have a kind of radical criticism.

In seeking these disproportionally harsh penalties the authorities are trying to send a very, very strong message.