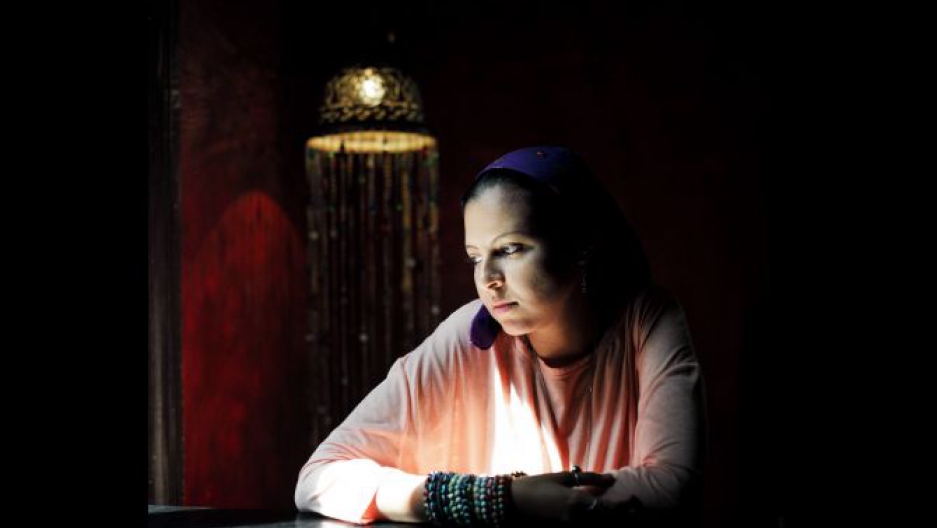 Sondos Shabayek, founder and director of Tahrir Monologues, created the play in response to what she saw as a need to create a space to remember and process the events of 18 days in Tahrir Square and what has followed in the months since. Pictured in Cairo in May 2012.
Credit: Elizabeth D. Herman
Share

The journalist-turned-director launched the show last year to imitate Tahrir Square’s dynamics. A series of heart-felt, action-filled monologues have played out at several of Egypt’s theaters in recent months, tugging at audiences’ memories.

“With theater, you are closer to the truth than you ever, ever are with a piece of news,” says Shabayek, her olive-colored eyes revealing a childlike passion and an artist’s uncertainty.

Protesting and performing her way through 2011, Shabayek may have missed out on fashion, dressing instead the in the scarves and goggles of the revolutionaries, but she got continuous physical and mental workouts. She also tested the boundaries of her fear.

After the revolution, the 26-year old divorced the career she says she fought for, journalism, and turned to the stage.

“I would push the buttons until something worked and it looked good,” Shabayek said. She had little experience with directing, so she improvised her way through.

Thrilled by the fluidity of the art form, Shabayek poured all her energy into building a team of performers and weaving revolutionary accounts together to put on a solid show.

Storytelling was happening spontaneously everywhere after the revolution. The media was not able to capture such stories, Shabayek says, and she was desperate to protect them.

“I wanted to save them up in a box,” she starts. “Because they were stories of the best moments of the lives of entire generations.”

She was intrigued by the power of theater to cultivate intimate relationships between the audience and the performers. Tears trickled down some faces as they flashed back to Tahrir.

“Everyone who faced danger in the revolution had moments of awakening, when they realized that life is short, moments of truth,” she says.

Like a jigsaw puzzle of revolutionary snapshots, Shabayek has been performing a revolution.

Something about Shabayek is gracefully dramatic. It’s the way she pauses between phrases, perhaps, that makes her words sound like a loosely constructed monologue of her own.

As art often is, the Tahrir Monologues theater project has been affected by the turbulent political transition in Egypt. At times, the venture felt irrelevant, Shabayek reveals.

“It’s very hard to work on a project where you tell the stories of a revolution, because when times are hard, you just don’t feel like it,” she says slowly.

Throughout the past 14 months, many Egyptians have wondered if there was a revolution at all. The Supreme Council of Armed Forces (SCAF) handled the aftermath of Mubarak’s downfall in a way very reminiscent of the Mubarak era: crackdowns on free expression and protest, virginity tests for women and military trials for civilians have raised doubts about the future of democracy in Egypt.

And at times, Shabayek was outright broke and in tears. Her team would urge her not to call it quits.

Shabayek seemed disturbed by the remembrance of those dreamy 18 days of revolution in January and February 2011. Often, performing Tahrir Monologues felt like putting on a ridiculous show of obsolete memories, she said.

Quoting lyrics from the Lebanese musician Marcel Khalife’s Passport, “And my wounds were an exhibition, for a tourist who adored collecting photos.”

“I don’t remember ever having the moment to think,” she says. “It would have held me back. I would have allowed myself to fear.”
Shabayek would play games with herself in later protests.

“I’d test my fear,” she says mischievously. As if watching her body on stage from the gallery, she dared herself to go further into the front lines and timed how fast she’d run back.

Over the past year, Tahrir Monologues has attracted many fans and loyal supporters. Shabayek’s not sure future performances of the show would draw as hearty an applause as it did in the months following the revolution, for people are more cynical about the revolution than they were then.

After a long pause, Shabayek says, “If nothing changes, if the political scene goes bad, it is enough that we changed.”

But Shabayek knows where she stands; she’s a revolutionary to the core.

In the coming months, Shabayek says she will take Tahrir Monologues back to the streets, where the truth is.