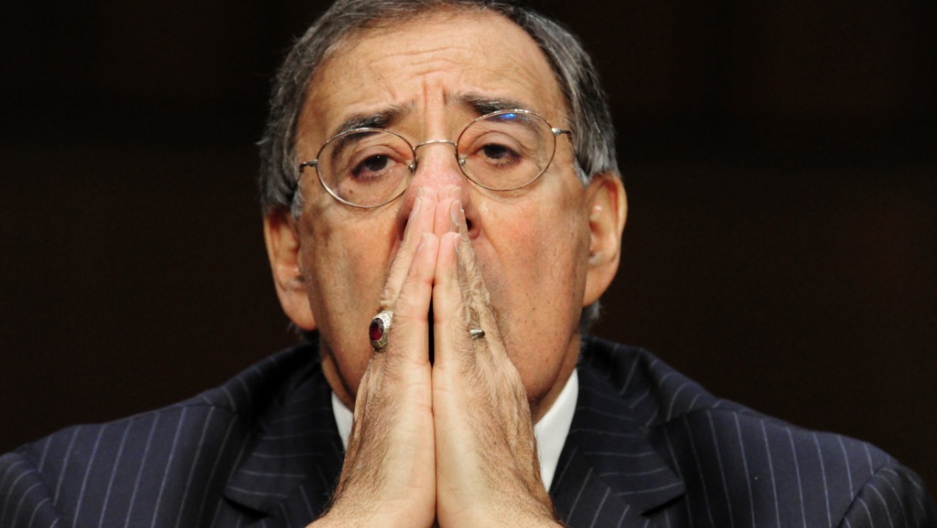 US Secretary of Defense, Leon Panetta, is visiting Israel to discuss Iran and its nuclear ambitions.
Credit: Karen Bleier
Share

JERUSALEM, Israel — Defense Secretary Leon Panetta's trip to Israel today may not be noteworthy if it weren't the fourth visit by a high-ranking administration official in the last month.

Iran and its nuclear ambitions — and how to respond to them — is the subject of all the meetings.

Among Jerusalem-based journalists, parsing nuances among almost identical iterations of statements admonishing Iran has become something of a Cold War era art.

In the past 24 hours, Israel Chief of Staff, Lt. Gen. Benny Gantz and Panetta used virtually indistinguishable language to warn Iran that "all options" — meaning a military strike, not just devastating sanctions — are on the table.

For much of the day Wednesday, it appeared that Israeli Prime Minister Benjamin Netanyahu and Defense Minister Ehud Barak were taking advantage of Panetta's stopover, so soon after the visit of Republican presidential challenger Mitt Romney, to hold Washington's feet to the fire about Iran's nuclear ambitions.

Sanctions have not convinced Iran that the West is serious, Netanyahu told Panetta.

In a series of television interviews Tuesday night — designed to "get the prime minister's message out," according to his spokesman, Mark Regev — Netanyahu appeared also to be positioning himself with respect to Israel's military establishment.

Israel’s generals have so far shown significant reluctance to threaten Iran with a strike.

While he denied any talk of a rift with his military commanders, Netanyahu said, "In the Israeli democracy, and in any other democracy, it is the political echelon that determines policy. The military echelon implements this policy. I've yet to reach a decision."

Netanyahu reiterated that Iran threatens to "annihilate us, and is not concealing its intention to use nuclear weapons.”

“I believe they must be prevented from doing so — I won’t let it happen," he said.

For Jerusalem, Iran poses an existential threat. The broad economic sanctions aimed at forcing Iran to give up what western powers believe is a nuclear weapons program are the subject of constant debate. Iran has maintained that its nuclear program is for peaceful purposes.

In Tunis, just before launching the Israeli leg of his trip, Panetta conceded that the US-led sanctions have not yet succeeded in changing Iranian behavior.

US President Barack Obama announced new sanctions, intended "to hold the Iranian government accountable for its actions," on Tuesday.

In what appeared to be a direct response to some of Romney's assertions, and to concerns voiced by Netanyahu, the White House also issued a statement on Tuesday stating that sanctions are, in fact, working.

"We have put in place crippling sanctions on the Iranian government. We have thrown the book at the Iranian government in terms of leaving no stone unturned in the sanctions regime. And we are determined and committed to preventing Iran from obtaining a nuclear weapon," said Ben Rhodes, deputy national security adviser for strategic communications.

Ricochets from Romney's two-day Jerusalem stay were particularly persistent on the subject of Iran, which the former Massachusetts governor addressed in a speech to donors and local supporters Sunday night.

In the forceful yet formulaic talk, which Israeli daily Ha'aretz said could have been written by the office of Prime Minister Benjamin Netanyahu, Romney said that Iran's nuclear ambitions endanger the world.

Treading on unusually critical territory for an American leader abroad, he stated that US-led sanctions against Iran were not working to curb the country’s nuclear ambitions, and that if Israel decided military action was necessary, he would "respect" the decision.

Some Israeli observers simply see Israeli and American political posturing above all else. The barrage of high-level American visits, said one, is "Obama saying we stand with Israel more than the Republican Party does."

Netanyahu finds himself embarking on an election year just as a new austerity plan has been announced, with new taxes and budgetary cutbacks that are eating into his poll numbers.

"The changing tone we see is related to domestic developments," says Meir Javedanfar, a professor at the Inter Disciplinary Center in Herzliya and an expert on Iran. "The tougher Netanyahu sounds on Iran, the more it will help him. Nothing has actually changed, except for the rhetoric. And the Americans are playing a similar game, because of the elections."

"By this stage, I think even the Icelandic security services see that the sanctions are working. This is all posturing," he says.

One possible confirmation of this hypothesis came from Mahmoud Bahmani, the governor of Iran's central bank, who equated sanctions with "military war” in an interview with the Iranian news agency IRNA.

If Iran feels relief at the prospect of the United States putting the kibosh on any possible immediate plans to attack, Javedanfar says, it is looking in the wrong direction.

"The danger is not a possible Israeli military attack. I don't see Netanyahu as a person who will risk the possibility of pushing the US president out of office by launching a unilateral attack on Iran before the election, and sending oil prices through the roof. No. The danger is the silent but deadly strike of sanctions which is being delivered by the West as we speak, and there is nothing iffy or ‘possible’ about it."