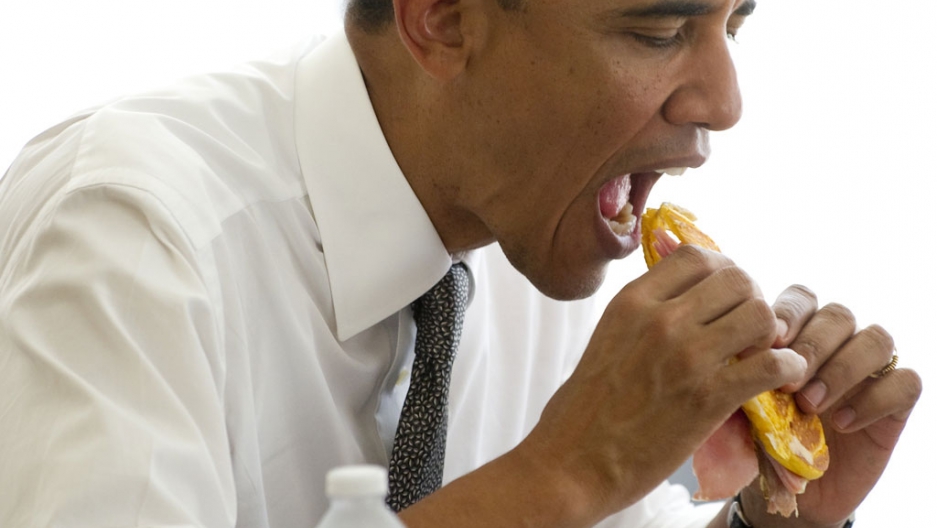 The President has no idea how much danger he's in: US President Barack Obama eats a 'medianoche' sandwich while eating lunch at Kasalta Bakery during a visit to San Juan, Puerto Rico, June 14, 2011.
Credit: Saul Loeb
Share

Sewing needles have been found in in-flight sandwiches on Delta and now, on Air Canada, causing some to cast an eye of suspicion towards our most dearly-beloved lunchtime dish. But what about other dangerous sammiches in human history? A non-exhaustive list follows.

Ohio congressman (and 2008 Presidential hopeful) Kucinich's very public ordeal began in 2008, when he bit into an unmarked-and-dangerous olive pit in a sandiwch served at a House of Representatives cafeteria in Washington DC - splitting his tooth into multiple pieces and causing him "excruciating" pain.

"This injury required nearly two years, three dental surgeries, and a substantial amount of money to rectify," Kucinich told CBS, pointing out that he had to get both implants and a new bridge to fix the ensuing dental problems.

Kucinich sued the cafeteria for damages of $150,000, reported the LA Times, and the case was settled in January for an undisclosed quantity of money. The lawsuit landed on Anderson Cooper's "RidicuList" in January, 2011 — more on that in the video below.

Pity Frank Sutton: late one evening in 2005, the amusement park ride technician decided to stop for a McDonalds chicken sandwich, somewhere in the bowels of Southwestern Virginia.

But things got ugly when the Florida native bit into the sandwich, whereupon, according to court records of Sutton's testimony, “the grease from the inside of the chicken sandwich spread out all over my bottom lip, my top lip, down onto my chin," and immediately caused serious facial blistering.

Sutton promptly filed suit and demanded $2 million for his troubles, pointing out that he was forced to work less due to a painful, persistent lip condition induced by the burns. The "exploding chicken sandwich" case was eventually settled in September 2010 for an undisclosed sum - and set off a round of hearty debate over tort reform and frivolous lawsuits.

Who's the wacko littering a peaceful British shore with rat-poison filled sandwiches? In April, the Daily Mail breathlessly reported that an unpleasant specimen was leaving deadly sandwiches for free-roaming pets to find, killing three curious dogs. Local police vowed to step up patrols of the East Wittering beach, located near Chichester, West Sussex - but the rat poison killer appears to still be at large.

Further, beach resident and Rolling Stones musician Keith Richards was personally warned to "leave it" if he found any tempting looking lunchtime treats while out walking.

Mitt Romney may also be in danger.

UK sandwich shop owner Mariel Morris managed to poison 47 police officers with un-hygienic tuna sandwiches in 2009, reported the BBC, an action that scored her a four-month suspended jail sentence. The 70-year-old Morris blithely served the deadly sandwiches to the officers at a protest briefing, causing nine officers to land in the hospital, and 38 others to suffer abject gastric discomfort.

It was determined that Staphylococcus aureus organisms were reproducing merrily away in the offending tuna salad and had caused the illnesses, due to Morris's remarkably poor understanding of the concept of basic food safety. Morris was also ordered to obey a curfew and to wear an electronic monitoring tag, reported Fox News, presumably to protect the innocent from her cooking.

When we look further back into the history of sandwich-borne plague, we encounter Alois Elias, World War II era Prime Minister of The Protectorate of Bohemia and Moravia in what is now the Czech Republic, and an exceptionally complex figure in the Central European nation's history. Elias was roundly denounced for cooperating to some extent with the Germans, but it was revealed recently that he had plotted to off some Nazi sympathizing Czech journalists - by way of sandwich.

Český Rozhlas reports Elias bought the offending sandwiches himself from a local deli, whereupon a pharmacist friend "injected lethal doses of typhus and tuberculosis bacteria along with the meat-sausage infection known as botulotoxin into them."

Four of the seven intended victims fell ill and only one, Karel Lažnovský died - proof that murder by sandwich is at best an imprecise art.

Elias was eventually arrested and sentenced to death by the Nazis, but history reveals the beleaguered leader had hoped to use the poisoned-sandwich trick on Secretary of State Karel Herman Frank, added Český Rozhlas.