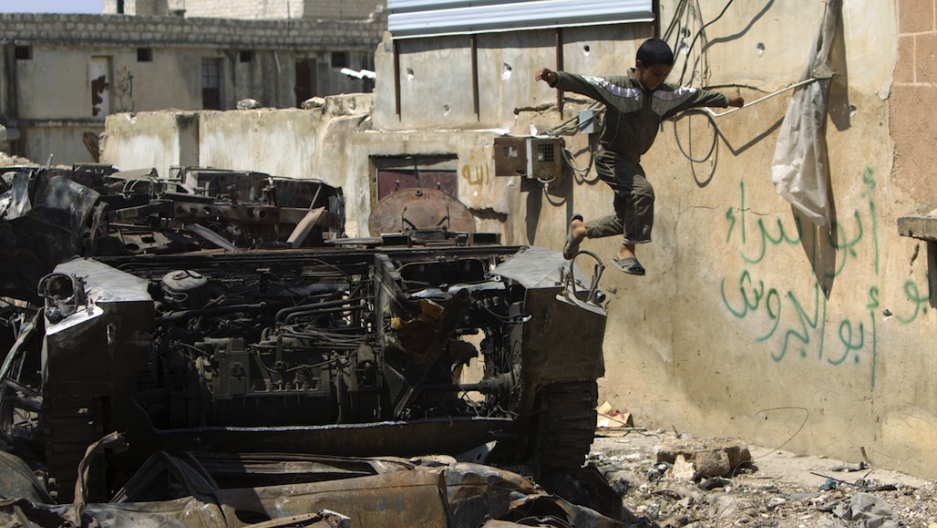 A Syrian boy jumps off a destroyed army armored vehicle in the northern town of Atareb, 25 km east of Aleppo, on July 31, 2012. While fighting raged in Syria's commercial capital or a fourth straight day, clashes between the Syrian army and rebels also erupted in Damascus and other parts of the country, the Syrian Observatory for Human Rights said.
Credit: AHMAD GHARABLI
Share

In what was reported to be his first public appeal since his inner circle was decimated by a targeted bombing in mid-July, Syrian President Bashar al-Assad pressed the Syrian army to beef up their readiness to confront “internal agents,” The New York Times reported.

In a written statement released by Syria's state news agency that marked the 67th anniversary of the founding of the Syrian Army, Assad referenced a "crucial and heroic battle" that "determines the destiny of our people and nation," according to reports.

"In the war in which the country is embroiled and the battle against criminal and terrorist gangs, the army has proven its mettle," NPR quoted Assad as having said in the statement. "I have great confidence in you and the masses see you as a source of pride and honor ... and a defender of just causes."

Assad's comments come as fighting for control of Aleppo, Syria's most populous city and a center of commerce, intensifies. Syrian state media have claimed inflicting heavy losses there, while UN observers claim to have witnessed fighter jets firing on rebels, according to the BBC. However, reporters and activists inside Syria told the BBC that rebels still have control over much of the city.

Fighting also continues in Damascus, the Syrian capital, and its suburbs, and in the town of Rastan in Homs province, according to CNN.