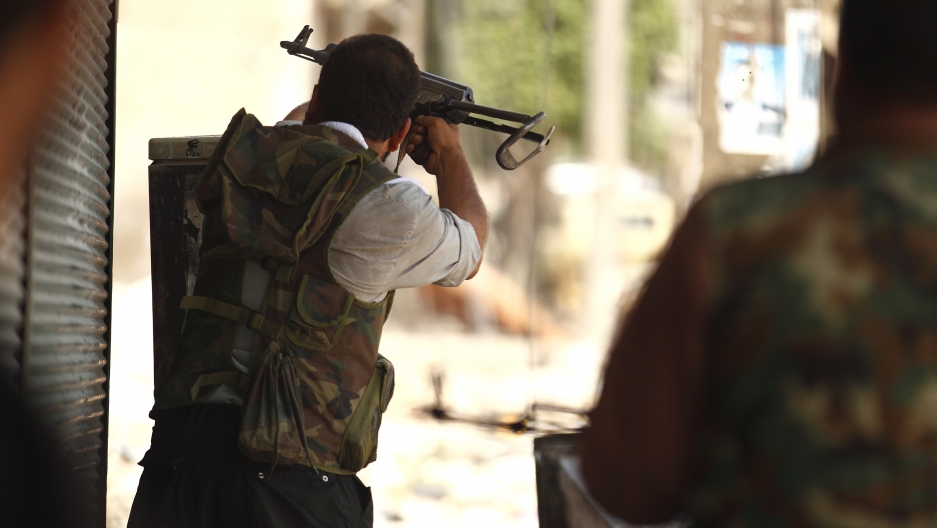 A member of the Free Syrian Army fires his weapon at a sniper position during clashes with forces loyal to President Bashar Al-Assad in Aleppo's district of Salah Edinne July 31, 2012. (Photo by Zohra Bensemra/Reuters.)

Syrian troops and rebels are fighting a fierce battle for control of Aleppo, Syria's largest city with nearly 3 million residents.

As hundreds of thousands stream out of Aleppo, the Syrian Army is making a push to retake the city, but they're meeting determined Syrian rebel resistance.

Richard Galpin, a correspondent for the BBC reporting from near the Turkish-Syrian border, said the situation is quiet right now where he is, but refugees from Aleppo may be crossing into the country in a different area.

"Over 48 hours, Sunday to Monday, 1,000 refugees arrived," he said. "We don't have the updated figures, but it seems like not the kind of numbers we'd expected have actually been able to cross the border."

Whether they're being blocked by Syrian forces, or have decided on their own to hang on in Syria, but outside of Aleppo, remains to be seen, he said.

Galpin said Aleppo is really the focus of rebel forces across the country right now.

"We had the attack on Damascus itself, the capital, a few weeks ago and that huge bomb blast, which killed some of the top members of the Syrian government," Galpin said. "I think that the rebels in the area around Aleppo took that as a signal to move into Aleppo, which they did about 10 or 11 days ago."

Rebels have gained control of some parts of the city, which is where the battle now rages.

The Syrian Army deployed heavy tanks and artillery into the area late last week, and has been pounding rebel-controlled areas with mortars, shelling and helicopter gunships.

"They're throwing a lot at it," Galpin said. "This is a crucial battle. Aleppo is the biggest city in Syria, it is also the economic and commercial hub of the country. For the Syrian government to lose it to the rebels would be an enormous blow."

But the rebels also need to hold onto territory for their own continued relevance. Both sides have been releasing misleading information, Galpin said, in an effort to bolster their perceived position.

"What does seem to be correct seems to be the rebels hold some ground in the eastern and southeastern parts of the city," he said. "How extensive that is, is difficult to tell."

It's also clear the Syrian government has mounted a violent campaign to remove them from their position.