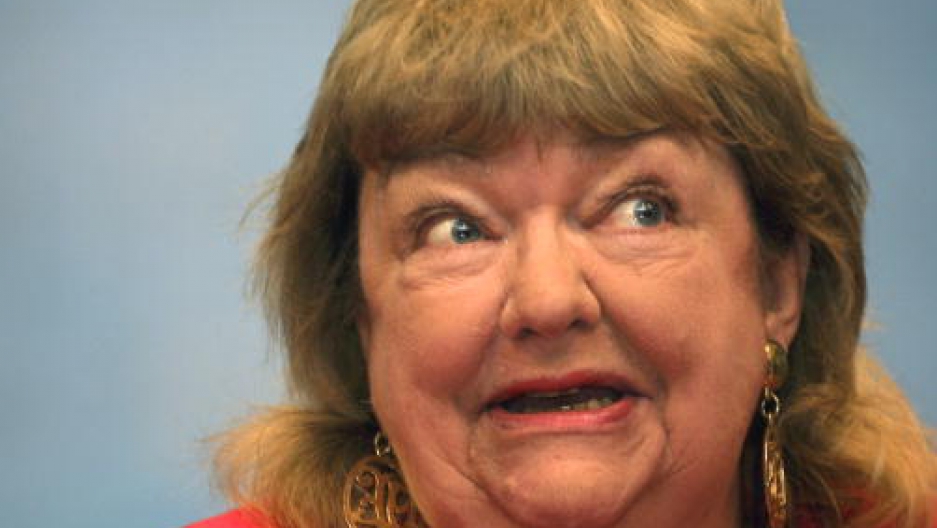 Maeve Binchy awaits the next person in line as she signs copies of her book "Scarlet Feather" at Borders Books and Music March 16, 2001 in Chicago.
Credit: Tim Boyle
Share

Maeve Binchy, the Irish author who made The New York Times' bestseller list and in Oprah's Book Club, has died in Dublin aged 72, after a short illness.

The Irish Times, where Binchy worked as a journalist, reported that the best-selling author died in a Dublin hospital on Monday with her husband Gordon Snell by her side.

Titles included "Circle of Friends" — adapted into a 1995 film starring Chris O'Donnell and Minnie Driver — and "Tara Road" — which according to the Associated Press was chosen by Oprah for her popular book club.

The story depicts Irish and American women who switch homes without having met.

According to the Guardian, Binchy — a University College Dublin graduate — worked as a teacher before joining the Times as a journalist, columnist and women's editor.

She became London editor of the paper in the early 1970s.

However, on her official website Binchy described her childhood as being "full of enthusiasms, mad fantasies, desperate urges to be famous and anxious to be a saint."

Other novels included "The Copper Beech," "Silver Wedding," "Evening Class," "Heart and Soul," and her last, "Minding Frankie," published in 2010.

She announced her retirement in 2000, but kept writing, only recently writing on her website: "My health isn't so good these days and I can't travel around to meet people the way I used to. But I'm always delighted to hear from readers, even if it takes me a while to reply."

The Times quoted the Irish prime minister, or taoiseach, Enda Kenny as saying:

"Today we have lost a national treasure. Across Ireland and the world people are mourning and celebrating Maeve Binchy. She is a huge loss wherever stories of love, hope, generosity and possibility are read and cherished.

“Today as a nation we are thankful for and proud of the writer and the woman Maeve Binchy. I offer my deepest sympathies on behalf of the Government and the Irish people to her husband Gordon Snell and extended family."