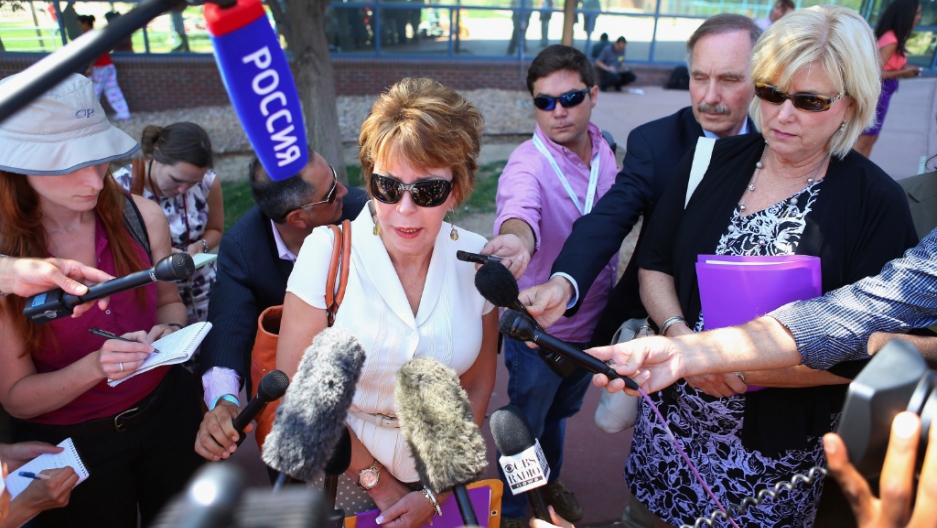 Mary Ellen Hansen, the aunt of Ashley Moser , a victim of the Aurora shooting, speaks to the media outside the Arapahoe County Courthouse after attending an arraignment hearing for suspect James Holmes on July 30, 2012 in Colorado.
Credit: Joe Raedle
Share

Family member, MaryEllen Hansen, told CBS News that doctors had delivered the heartbreaking news, telling her niece she will be paralyzed from the waist down due to the injuries sustained in the mass shooting.

Hansen said it was hoped Mosers, who was shot in the neck and abdomen, would keep the full use of her arms.

“She’s going to be paralyzed and at this point we do have hope that she’ll have use of her arms.

"It’s going to be a very long recovery, not to mention the emotional piece of it all as well,” she said.

Hansen told the Associated Press that the funeral for Moser's daughter, Veronica Moser-Sullivan, has been delayed until her mother is well enough to attend, and no date has been set.

The Huffington Post reported that Hansen spoke at the courthouse yesterday following the court appearance of James Holmes, who was charged with 142 criminal counts.

After the hearing, she said she thought Holmes appeared coherent and alert and that he had a "persona of evilness."

The miscarriage was not counted as one of the murder charges because homicide charges in Colorado only apply to those "who had been born and alive," CBS Denver reported.