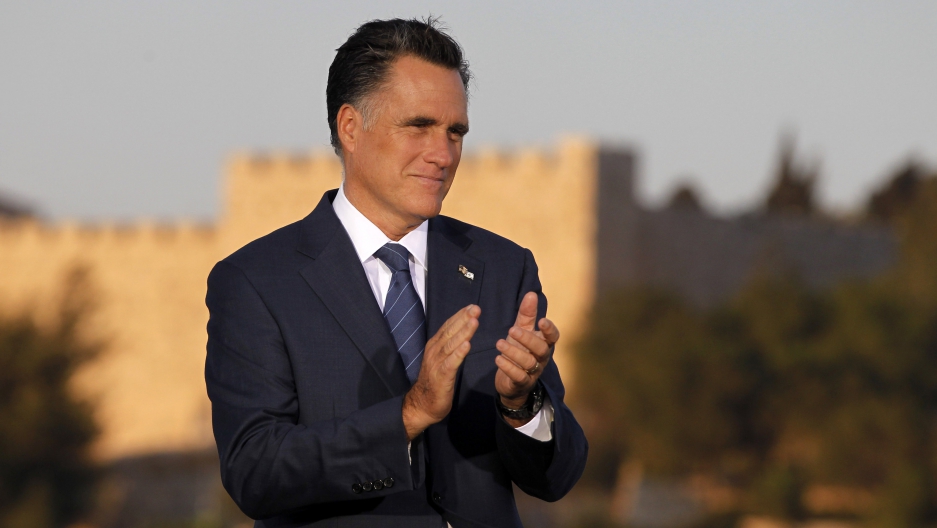 Mitt Romney, with the sunset as a backdrop, spoke to a crowd of supporters and donors in Israel on Sunday, his second stop on a three-country trip to highlight his foreign policy agenda.

His trip to the largely-Jewish nation has been a promotion of his foreign policy with regards to Iran.

"We should employ any and all measures to dissuade the Iranian regime from its nuclear course. And it is our fervent hope that diplomatic and economic measures will do so," he said to the crowd. "In the final analysis, of course, no option should be excluded. We recognize Israel's right to defend itself and that it is right for America to stand with you."

Earlier in the day, an aide, Dan Senor, said Romney would respect the choice of Israel to lodge a pre-emptive and unilateral strike against Iran with the aim of crippling their nuclear program, a course the Obama administration has discouraged.

Such an approach is definitely more aggressive than the Obama administration has charted and is likely to win favor for the former governor with Israeli Prime Minister Benjamin Netanyahu.

But Romney rolled back his campaign's rhetoric in an appearance on Face the Nation later.

"I'll use my own words, and that is I respect the right of Israel to defend itself, and we stand with Israel," Romney said. "We're a nation — two nations — that come together in peace and want to see Iran being dissuaded from its nuclear folly."

President Barack Obama has discouraged such tough talk from candidates in the past. In a January press conference, Obama noted that what's said on the campaign trail is devoid of the reality of leading a nation.

"They're not commander-in-chief," he said. "And when I see the casualness with which some of these folks talk about war, I'm reminded of the costs involved in war."

The topic of Iran will no doubt form a heated topic during presidential debates in the months to come, as both Obama and Romney vie for the Jewish-American vote.

Meir Javedanfar, an Iranian Studies lecturer in Israel, however doesn't think Romney's position will get him far with Israelis.

"Only 19 percent of Israelis supported a unilateral strike by Israel. The only higher number for war, that supported the military option, was 26 percent, but that's as long as America attacks them," Javendanfar said.

Javendanfar says many Israelis view Obama's dual approach of sanctions and negotiations as successful, discrediting the drive for a military strike.

But rather than appealing to an Israeli audience, who obviously won't be voting, Romney's real audience is Jewish-Americans.

But Iran wasn't the only topic that Romney weighed in on in Israel. He found himself on the defensive again after offending Palestinians at a breakfast fundraiser Monday morning. Romney suggested that it was Israeli culture versus Palestinian culture that accounted for the disparity between the economic fortunes of the two societies.

“As you come here and you see the G.D.P. per capita, for instance, in Israel which is about $21,000, and compare that with the G.D.P. per capita just across the areas managed by the Palestinian Authority, which is more like $10,000 per capita, you notice such a dramatically stark difference in economic vitality,” he said, according to The New York Times.

“It is a racist statement and this man doesn’t realize that the Palestinian economy cannot reach its potential because there is an Israeli occupation,” Erekat said. “It seems to me this man lacks information, knowledge, vision and understanding of this region and its people.”