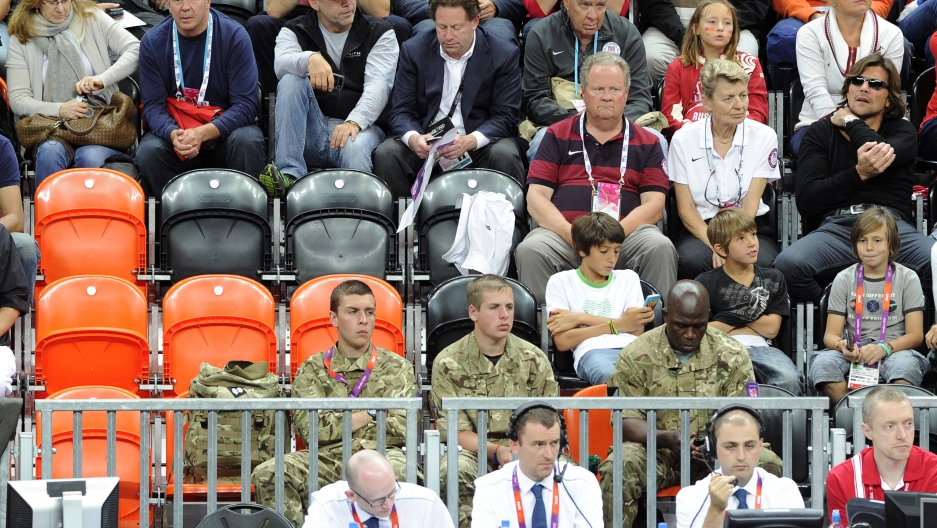 British soldiers watch China and Spain's basketball match at Olympic Park Sunday. British troops brought in at short notice to help with security were summoned for a second time Sunday -- in the easier role of filling empty seats. (Photo by Reuters.)

London's Olympic organizers have had an embarrassing problem coming out of these first days of Olympic competition: empty seats.

It's not that the seats weren't sold, or passed out, they just weren't being used. Most of the empty seats were held by official Olympic organizations. On Monday, though, the London organizers took back about 3,000 tickets and put them up for sale to British residents, in hopes of filling some of those seats that have gone empty.

Adding to the controversy, London organizers had vowed there would be no empty seats, after rejecting numerous requests for tickets and saying they'd all been given out. All 3,000 returned tickets have been sold already, but more are expected to be sold for upcoming sessions.

"That includes about 600 for the gymnastics event today and we are going to do that on a day to day basis," Jackie Brock-Doyle, a spokeswoman for the London Olympic committee, said to the BBC. "So we are doing this session by session, talking to the accredited groups including broadcast media, and asking whether we can release for the different sessions tickets back into the public pot. Where we can, we are going to release those the night before and put them up for sale."

But Brock-Doyle says it's not an exact science, as to how many seats to make available. For example, the swimming events and the USA basketball game have all been packed.

According to Agence France Press, many of the seats that are empty were allotted to members of the media, who haven't taken their seats.