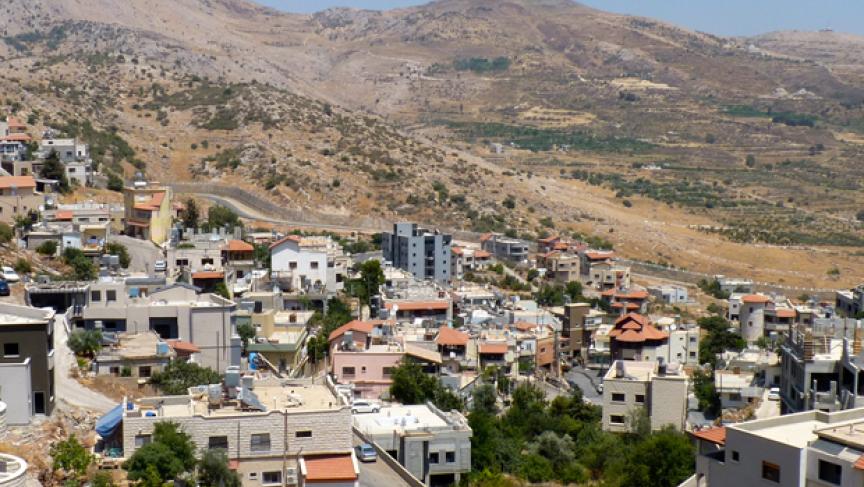 Israel is stepping up security measures along the ceasefire line with Syria as the violence there spins out of control, placing its troops on high alert and reinforcing the fence that divides Syria from the Israeli-controlled Golan Heights.

Israel is worried that refugees — or militants — might try to cross the dividing line into the Golan. Meanwhile, much of the local population in the Golan Heights is watching events in Syria with deep anxiety for different reasons altogether.

White-haired, 58-year-old Sameh Ayoub has been captivated by the news from Syria for months. He spent much of his youth in Damascus, before moving back to his parents' home village of Majdel Shams in the Golan Heights.

Ayoub said it had been heart-wrenching to see his national homeland descend into bloody chaos. And what had been more disturbing, he said, was that this week, he had literally been able to hear fighting going on across the ceasefire line. He knows some of the residents there personally.

Before 1967, when Israel took control of the Golan Heights, people in the villages just across the ceasefire line were neighbors with Majdel Shams.

“We just dream about the children, about the families,” Ayoub said. “Why? What they do?”

Like many of the Druze Arabs living on the Israeli side of the ceasefire line, Ayoub thinks of himself as Syrian through and through. But he is disgusted with the violence that the Syrian government has unleashed on its own people.

Standing on the roof of his home, pointing toward Syria, Ayoub said it is disturbingly ironic how the Syrian government had been telling anyone who would listen about Israel’s destruction of the Syrian village of Quneitra after the 1973 war.

“How many villages and towns (have been) damaged by the (Syrian) regime without any (mercy)?” he asked.

Ayoub has relatives still living in Damascus, including his brother. They stay in touch through Skype and email, but Ayoub said they tried to be careful about what they said, because they were never sure who might be listening. But Ayoub has no doubt about who the good guys are in this conflict. He said they were the rebels fighting to overthrow President Bashar al-Assad's regime.

But things are complicated in the Golan Heights. This tight-knit community of about 20,000 Arab Druze living in the Israeli-occupied reigion is bitterly divided over what is happening in Syria.

A local pharmacist, Gandi Kalouni said what was going on in Syria was a regional war between the government of Assad and foreign-funded terrorists allied with al-Qaeda.

“Wait and see who will go,” Kalouni said from behind the counter of his drug store. “Sarkozy in France is gone. Same with Berlusconi in Italy. Obama will soon be gone too. But Assad will stay in power because the people of Syria want him to.”

Every Friday, members of the Druze community in the Golan have been coming out to show their support — for and against — the Syrian revolution. Last week, rival groups faced off against each other.

So far, there have been few violent incidents between opposing groups in the Golan. But human rights activist Salman Fakheraldeen said he was worried about things getting out of hand.

“It’s a very small number of people in the Golan,” he said. “Most of us are relatives.”

The name of the game here, Fakheraldeen says, “is to educate ourselves to accept others while they are different.”

He said the Syrian community in the Golan Heights could be physically cut off from events in Syria. But the conflict has already infected the population here. Now, he said, people needed to come together to keep things from getting worse.