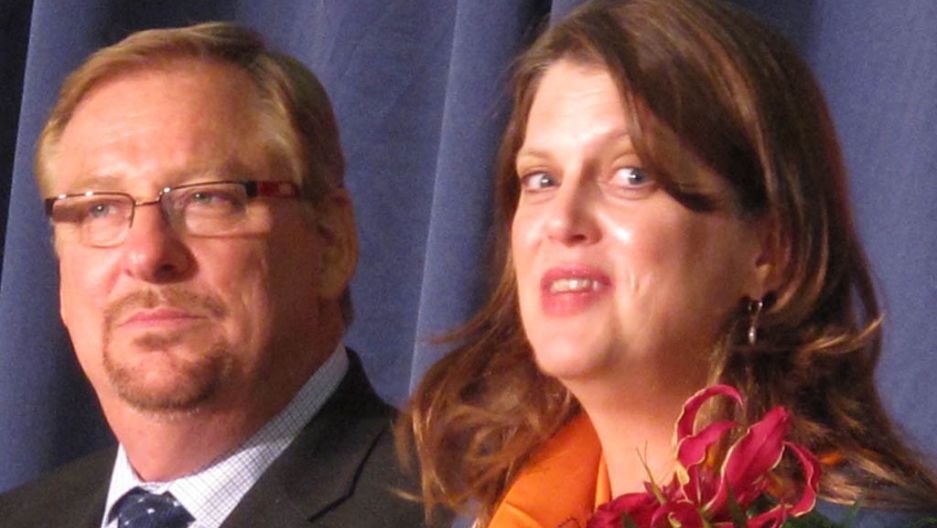 WASHINGTON, DC—The International AIDS Conference was full of talk of hope and best practices, but no one was giving details on how to reach an “AIDS-free generation.” Still, this conference, like many before it, had several key moments when it was clear that the world of AIDS had changed.

One came at a summit of faith groups held across town from the conference, organized by Saddleback Church’s Rick and Kay Warren.

The message from the Warrens and others: We’re ready to play ball with everyone who wants to end AIDS.

“I don’t have to agree with everything you do to work with you,” Rick Warren told about 400 people who packed a dining hall at Georgetown University. He said he was looking for “co-belligerents,” people like Elton John, whom he talked with at a congressional briefing.

“The first thing in every village is a church, the second thing is a bar. I want to pray and I want to get drunk,” he said, drawing laughter. “The church has 2.3 billion people. The church is bigger than China. Nothing comes close to the hundreds of millions of church members waiting to get mobilized.”

Saddleback’s work in Africa follows what it calls the PEACE Plan, which stands for planting churches that promote reconciliation; equipping servant leaders; assisting the poor; caring for the sick; and educating the next generation.

What does that mean in terms of the response from this mega-church in Africa? Much of its work centered on orphans and Warren gave a few concrete details in his talk. That’s when it became interesting. The first was that the church wanted to keep orphans in their communities, helping find families for them. The second was that they didn’t want American groups building orphanages in Africa.

This last part is a source of major tension among US faith groups. Just six years ago, at a summit on AIDS at the Saddleback that drew 2000 religious leaders and the junior senator from Illinois at the time, Barack Obama, I heard representatives from other churches say that building orphanages in Africa was the most effective thing that they could do. That startled me so deeply – it is contrary to long-standing evidence that orphanages are not the best option for the overall health of a child -- that I traveled to Africa to report on what faith-motivated Americans were doing. It resulted in the publication of my book, A Twist of Faith, earlier this month.

I found in my reporting that US churches alone give more billions and billions of dollars each year to help Africa – more than the US government’s main development agency, USAID. Hundreds of thousands of Americans each year go on faith missions to Africa annually; one church, United Methodist, helps prepare 400,000 people annually for mission trips.

I also found that many of these big-hearted Americans worked or volunteered in orphanages, and many others worked with local community groups. In many cases, they were flying solo; governments often knew nothing of what they were doing, and local groups often had little or nothing to do with the work. I left thinking that the people doing this amazing work could be effective if only they were humble, coordinated their work with a country’s plans for orphans, and found great partners in local communities.

At the end of the three-hour session, Kay Warren stood and led the group in prayer. She said that she hoped those going to Africa to help children would give all they had. “If we are going to make a difference in the AIDS pandemic, many of us will need to commit to be the reckless ones,” she said.For her, reckless meant committing themselves totally to fix the problem. It was one of many moments at the conference when a prominent speaker called on people’s moral values to help those in the AIDS fight. But in this case, there was something concrete behind it – the influential push by Saddleback and others not to build orphanages and keeping children in communities. That won’t end AIDS, but it will help AIDS orphans.

John Donnelly is the author of A Twist of Faith: An American Christian's Quest to Help Orphans in Africa, published by Beacon Press earlier this month.