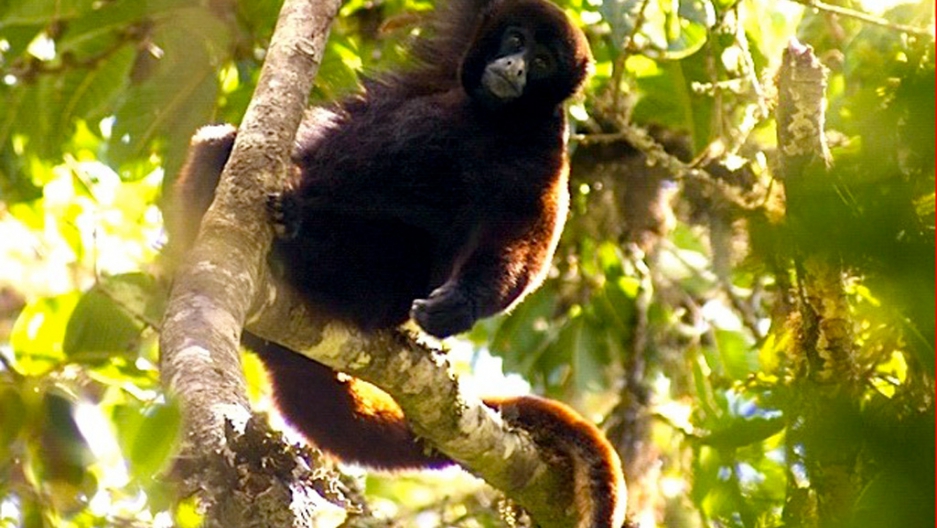 COROSHA, Peru — Homero Francisco Lopez shudders as he recalls how he used to hunt one of the world’s most endangered monkey species.

“I'm ashamed when I think about it now,” the 58-year-old subsistence farmer says.

He once shot a yellow-tailed woolly monkey because it had playfully goaded him by throwing fruit and twigs onto his head.

“It was the custom. We didn’t know any better,” he adds. “But now that we have learned what a unique animal it is, and how it can even bring tourists here, we want it protected.”

Still, hunting and rampant deforestation continue to take their toll. The yellow-tailed woolly monkey’s soft fur is highly prized and many still covet its meat. Poachers often target mothers with their young because they can sell babies as pets.

The species’ natural curiosity hasn't helped. The monkeys are often attracted to the sound of gunfire, and even hang around after one of their group has been shot. Their slow reproductive cycle makes the population even more vulnerable.

There are now thought to be fewer than 1,000 in the wild.

They occupy a narrow band of Peru’s northeastern Andes, between 5,000 feet and 9,000 feet. They tend to live in isolated and increasingly inbred groups, trapped in shrinking patches of steep, spectacular cloud forest surrounded by new fields.

Russ Mittermeier, a primatologist who heads Conservation International and rediscovered the species in 1974, predicts it may not survive more than another two decades.

The International Union for the Conservation of Nature (IUCN) classifies the yellow-tailed woolly monkey as “critically endangered.” The next category is “extinct in the wild,” for species that only survive in zoos.

Part of the problem has been a recent, massive influx of migrants from the neighboring mountainous Cajamarca region, driven in part by a boom in mining there, which has prompted many to sell their land to mining companies.

Lopez recalls how his village, Corosha, had just 20 families when he was growing up. It now has about 200, with many of the newcomers clearing forest to sow crops, disregarding the community’s decision to conserve watersheds and protect this rarest of primates.

The village has even established its own 5,600-acre communal conservation area to showcase the monkey and, with Conservation International’s support, is building a lodge for tourists.

However, not everyone has bought into the attempt to protect the primate or, indeed, any of the area’s fragile nature. “I have almost been beaten up trying to stop people fishing here,” notes Walter Gonas Santillan, the communal president.

The yellow-tailed woolly monkey has always been rare. It was first recorded in 1812 by the German explorer Alexander von Humboldt. He never actually saw a live animal, just a saddlecloth made from a monkey skin.

That the species even survives today is something of a reprieve. For most of the 20th century, it was actually thought to have been extinct, until the expedition led by Mittermeier.

Humans’ traditionally limited interaction with the species was largely due to the inaccessible nature of its range, where the Andes overlap with the Amazon and even indigenous people rarely ventured.

But poverty, ignorance and immigration are now changing that, as squatters push farther into the cloud forest, says Fanny Cornejo, a local primatologist. She is one of a tiny handful trained in the science despite the fact that Peru is among the top-five nations for primate diversity with between 36 and 48 confirmed species.

On the morning I accompanied her to see the colony she studies, we spent three hours on a pre-dawn bushwhack, the mud all-but sucking the rubber boots off our feet. But when we finally spotted the monkeys on the summit of a densely forested sugarloaf mountain, it was worth it.

Despite the name, almost the entire animal, including its tail, is a deep, rippling mahogany color. Adults of both sexes exhibit a large yellow “pubic tuft.” Cornejo calls it a “pompom.”

Reacting to our presence, a group of six frolicked in the canopy, the monkeys’ high-energy antics powered by their omnivorous diet. Primates that exclusively live off leaves, such as howler monkeys, tend to be slower and less entertaining to watch.

Mittermeier is now calling for a campaign to educate Peruvians about the yellow-tailed woolly monkey and make it a national symbol. “We need to create as many protected areas as possible, and not just state ones, but also private and community ones,” he said.

Yet even that emblematic status might not be enough to save the species given the dwindling number of condors in Peru and Bolivia, a national icon in both countries.

“I tell everyone we need to protect it, not destroy it,” says Gonas Santillan. “They say yes, but they don’t always do that. Somehow, we have to make sure it survives. It 's not worth thinking about the alternative.”