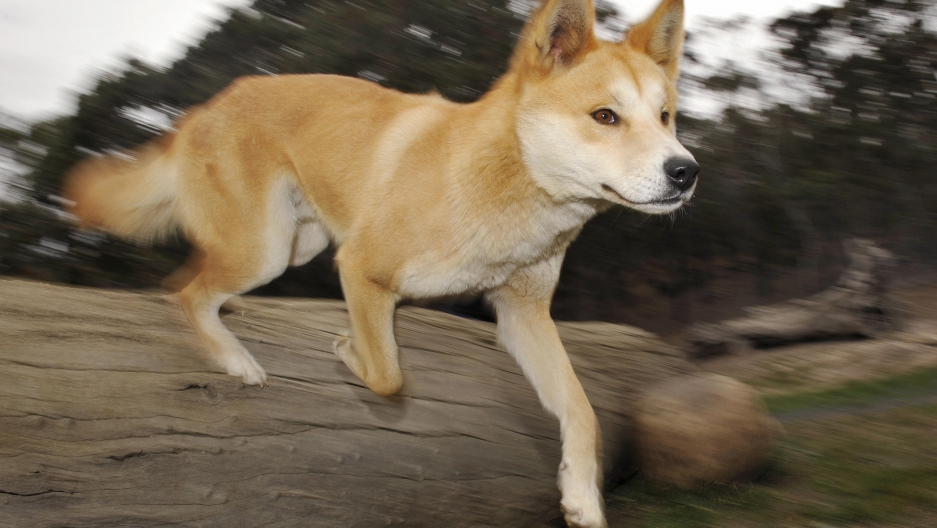 A dingo runs at the Dingo Discovery and Research Centre at the Toolern Vale in rural Victoria, some 60 kilometres north-west of Melbourne, where she is breeding dingoes for export to zoos around the world, on May 25, 2009.
Credit: WILLIAM WEST
Share

A savage dingo attack on a tourist in Australia has prompted wildlife authorities here to renew warnings about the native wild dog.

So severe were the German man's injuries that he needed to be airlifted off Fraser Island, on the coast of Queensland, to a hospital on the mainland.

The man, 24, suffered serious injuries to his head, legs and arms but was in a stable condition, a spokesman from the Department of National Parks and Recreation told the Australian Associated Press.

According to the ABC, a 10-year-old boy was killed by dingoes on Fraser Island 11 years ago.

According to Australia's ABC Network, the man had wandered away from his tour group Saturday morning and fallen asleep on a track, where he was attacked by two dingoes.

As a result of the attack, park rangers had increased their patrols on the island.

"This incident serves as an ongoing reminder that dingoes are wild animals and need to be treated as such," National Parks spokesman Ross Belcher said in a statement.

"The way to avoid such incidents is for all people to follow the department’s dingo safety messages."

The previous state government had promised to cull some of the animals.

Dingo attacks in Australia, while rare, invoke memories of the Azaria Chamberlain case made famous by the Meryl Streep film "A Cry in the Dark."

More from GlobalPost: Another inquest into Azaria Chamberlain disappearance

Nine-week-old Azaria Chamberlain went missing in August 1980 from a campsite near Uluru, in central Australia.

Her mother, Lindy Chamberlain-Creighton (nee Chamberlain), was found guilty of the murder in 1982 and sentenced to life imprisonment, while her then husband Michael was given a suspended sentence for being an accessory after the fact.

An inquest into the Chamberlain's disappearance has ruled that a dingo or dingoes were responsible for the baby's death in August 1980.

Chamberlain-Creighton was released in 1986 when an item of Azaria clothing was found after after rulings by successive inquests that she was not guilty.

A final inquest concluded in early June that a dingo or dingoes were responsible for the Azaria's death.

More from GlobalPost: Azaria Chamberlain was taken by a dingo in 1980, Australian coroner finds