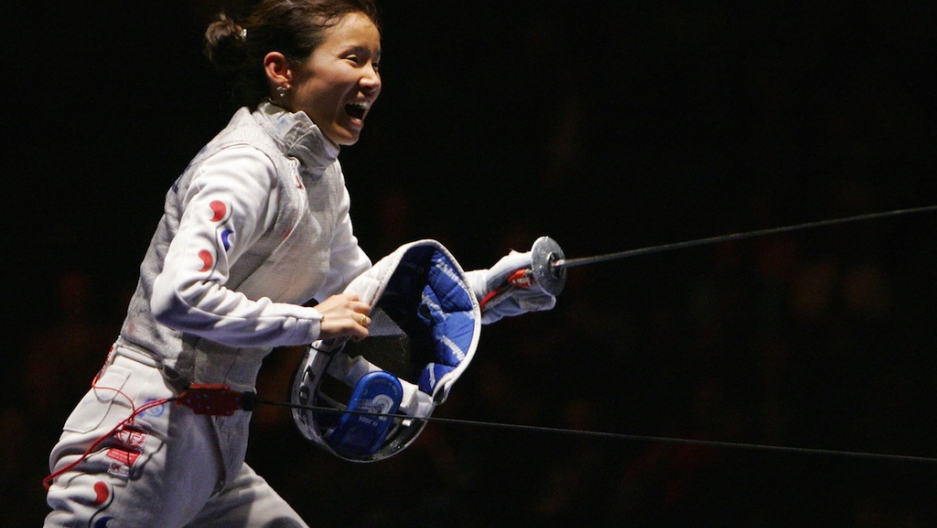 Korea's Nam Hyun-Hee celebrates on the track in Leipzig 13 October 2005, after her match point against Romania's Roxana Scarlat in the Final match of the Women's Foil Team competition for the 2005 Fencing World Championships.
Credit: Jacques Demarthon
Share

Nickname: "Peanut," for her small size, but she is also called a "swords beauty"

Competed before? Silver medalist in women's foil at the 2008 Beijing Olympics.

Why we're watching: Maybe because she is South Korea's first female fencing medalist? Or because she is the only non-Italian competitor in the top four? If that's not reason enough, there's also this: The Wall Street Journal has dubbed Nam "one of the strongest contenders for the gold in the women's foil at the upcoming 2012 London Olympics."

Any time for romance? Yes. Nam is married to Gong Hyo-Suk, one of the most well-known mountain bike racers in South Korea. The couple met at a ceremony for medalists at the 2006 Asian games. After the Beijing Olympics in 2008, Nam was hospitalized with hepatitis, and Gong helped to care for her. They married last year.

Biggest obstacle: As one of the shortest Olympic fencers in the world, Nam faces opponents with a much longer reach. But what she lacks in height, she makes up for in speed and technique. During the 2008 Beijing Olympics, Nam beat four-time Olympic gold medalist Giovana Trillini in the foil semi-finals. Trillini stands at about 5'5". Though Nam went on to miss the gold medal in Beijing by one point, she seems determined to take the gold this time around.

A bit of controversy: In 2006, Nam was banned from competition for a period of six months by the Korean Fencing Federation because she underwent a cosmetic procedure during training without the approval of her coaches. Apparently, the surgery was to fix a problem that had to do with Nam's eyelashes affecting her vision. Reuters reported that Nam also had cheek implants done at the same time. The Fencing Federation was not happy about the practices she missed during her recovery.

Quote to remember: "Though I was young, I knew that a tall athlete had an advantage," Nam told the Korea Herald, recalling her middle school fencing days. "But I also knew they were slower than me. I knew that I could beat them."