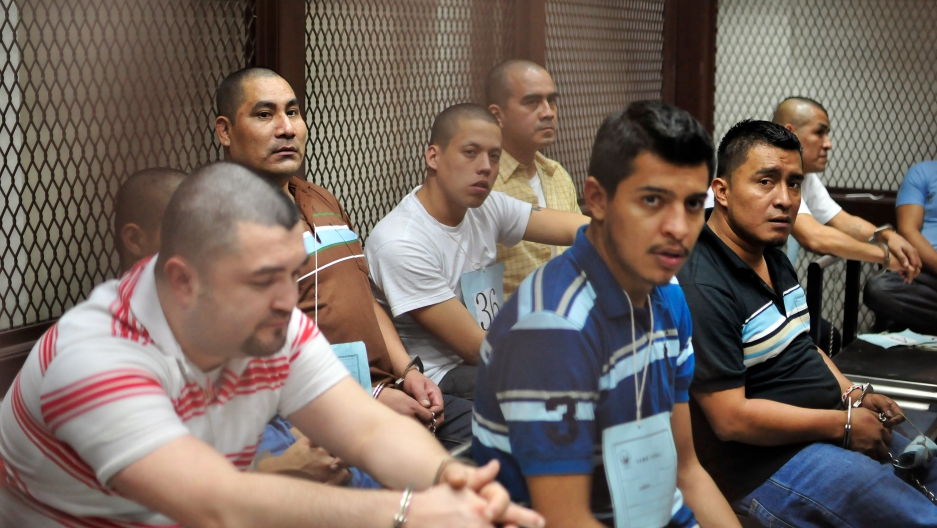 Suspected members of the Zetas drug cartel from Guatemala and Mexico wait in court for a judgement in Guatemala City on June 27, 2012.
Credit: Luis Soto
Share

Guizar, the group's boss for all of southeastern Mexico, was armed with 20 hand grenades, a light anti-tank rocket a submachine gun and a quantity of a synthetic drug when captured Thursday at a hotel in the central state of Puebla, the Associated Press cited Navy personnel as saying.

The southeastern Mexican branch of the cartel traffics cocaine and other narcotics to the US.

His arrest followed those of half a dozen Zetas members during the week, including another of the group's top commanders, William de Jesus Torres Solorzano.

Solorzano, reportedly nicknamed the Worm Eater, was captured in the city of Puebla, just east of Huejotzingo by Marines who saw a gun in the waistband of his pants.

According to the Houston Chronicle, he may have provided information that led naval infantry units to quickly rounded up five accomplices who had been operating the gang’s cell in Mexico City.

Guizar and Solorzano are suspected of being close associates.

According to Fox News Latino, Guizar's arrest stemmed from "naval intelligence work" in the wake of military operations carried out in Puebla, the Gulf coast state of Veracruz and in Mexico City.

Guizar commanded regional operations for the Zetas in Veracruz, Tabasco and Campeche, as well as the southeastern states of Chiapas and Quintana Roo, the AP wrote.

Nicknamed "The Yellow One," apparently because of his sallow complexion, he allegedly worked directly for Zetas co-leader Omar Trevino Morales.

According to Reuters, he was implicated in the killing of four soldiers in the Gulf state of Veracruz in April.

More from GlobalPost: Mexico’s drug war by the numbers