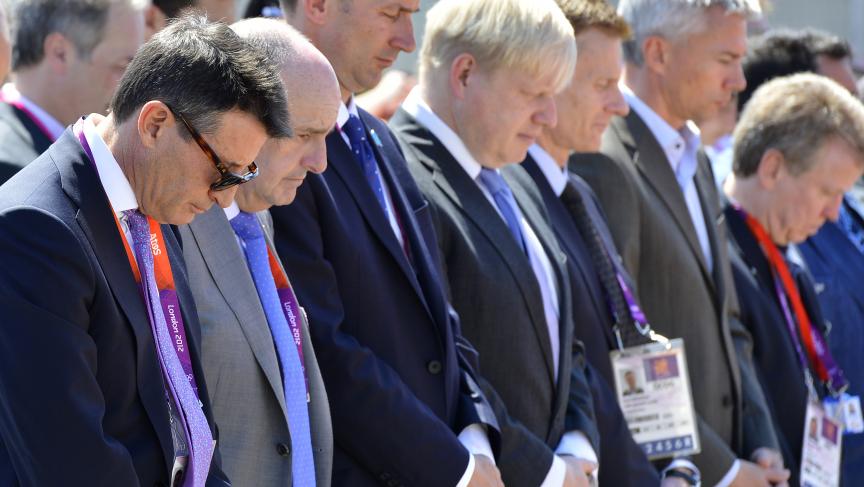 Sebastian Coe, left, chairman of the London Olympic committee, and other officials stand in a minute's silence at a ceremony in Olympic Park in east London July 23, 2012. IOC President Jacques Rogge paid tribute to the 11 Israeli team members killed

In 1972, Palestinian militants from a group named Black September stormed the Israeli quarters at the Olympic village in Munich.

They killed one Israeli and took 10 more hostage. The Palestinians demanded the release of hundreds of prisoners from Israeli jails. A rescue attempt went wrong, and all of the Israeli hostages — athletes and coaches — were killed.

Relatives of the victims are lobbying for a minute of silence to be included in the opening ceremony at London’s Olympics. So far, though, the International Olympic Committee has rejected their requests.

Friday morning, about 20,000 Londoners gathered around the city to hold their own unofficial gathering and moment of silence. The Zionist Federation of London organized the event and streamed it online.

But that will never be enough for people like Ankie Spitzer. Her husband, Andre, was Israel’s fencing coach in Munich. He was 27 when he arrived at the Games.

“He was so excited about meeting people from different countries, to be able to intermingle,” Ankie said. “That was his dream and that I remember very, very vividly from that time.”

When Andre and his fellow Israelis were taken hostage, Ankie watched on television with the rest of the world. At one point, Andre was brought to a window, stripped to his underwear.

“You could see that his hands were tied behind his back,” Ankie said. “The most humiliating for him was, in my opinion, that he did not wear his glasses, and he could not see without his glasses.”

Since the murder of her husband, Ankie Spitzer has spent 40 years in search of a single minute. But at every Olympic Games since 1972, Olympic authorities have rejected her call for an official moment of silence.

“In Montreal, they told us that there are 21 Arab delegations and they are going to walk out, and I said let them walk out because if they don’t understand the idea of the Olympics then they have no reason to be there,” she said. “Then we were told that we are bringing politics into the Olympics. That was the Barcelona games in ‘92.”

This year, in London, she’s making the case again, and Spitzer’s message has been bolstered by an online petition organized by a Jewish group in upstate New York. More than 100,000 people have signed it; both President Barack Obama and presidential candidate Mitt Romney have expressed their support. Other backers include legislative bodies around the world.

But the International Olympic Committee argues that the opening ceremony is not an appropriate forum for memorializing the victims of Munich, and that the events of 1972 have been remembered many times by the Olympic movement.

Alan Aziz of the Zionist Federation in London said that’s not enough.

“They may have done some things where three or four people have done something within a small room, but that’s not the same thing at all,” Aziz said. “They really should have the guts to do something properly, in public, and in the appropriate forum.”

The IOC says there will be a major memorial event during these Olympic Games, organized by Israel’s Olympic Committee and the country’s embassy in London, on Aug. 6. British Prime Minister David Cameron plans to attend, along with the head of the IOC, Jacques Rogge.

But it won’t be at an Olympic venue, and it won’t seen by the billion people expected to tune in for the opening ceremony on Friday.

Aziz said he understands the IOC’s concern about any perceived politicization of the Games. He said it isn’t even a Jewish issue, noting that other Olympic tragedies are equally worthy of remembrance — the victims of the Atlanta bombing in 1996, for instance.

“If they were to announce that they would like to hold a minute of silence for any victims who’d happened to die at any of the Olympic games, I would personally be completely happy with that,” Aziz said.

It’s unlikely that Olympic authorities would want to move in that direction — a segment of its big party devoted to its most horrific moments.

Some observers say that might be the real sticking point. The Olympic Games are a very expensive celebration. There’s a lot — and a lot of a money — riding on people having a good time.