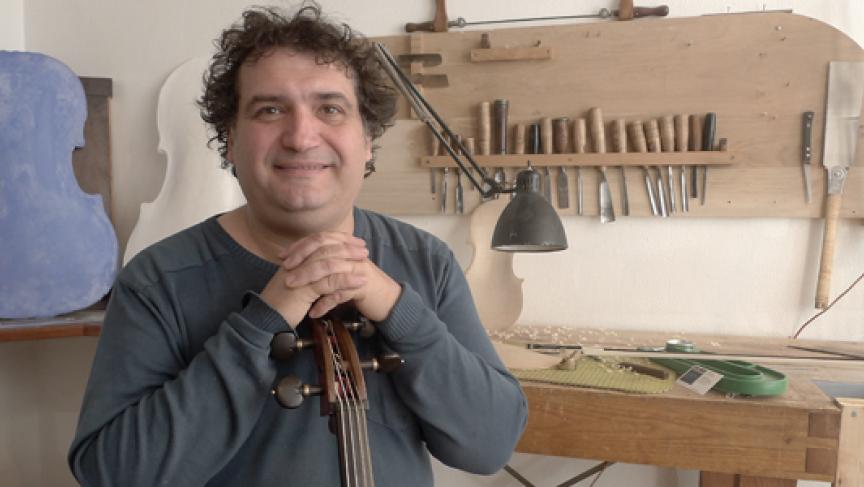 Antoine Laulhere, a master violin maker, reconstructed some of the lost violins of Louis XIV's era. He had little to go on but incomplete clues and a lot of enthusiasm. (Photo by Gerry Hadden.)

Say what you will about the Sun King, Louis XIV could dance.

At least that’s what historians tell us. And what King Louis XIV danced to was Baroque music. The royal orchestra that performed for the French court at Versailles included 24 violins — five different varieties of them.

Patrick Cohen-Akenine, an orchestra leader and violinist, says the sound of those violins must have been incredible.

“There’s a chemistry among the strings, a strength,” he said. “That’s what the 24 violins were; a musical institution with power. The director of the 24 Violins even had the title — King of the Violin,” Cohen-Akenine said.

That’s a strong moniker to give to someone at Versailles.

The Baroque movement had enough gas in its tank for another half century. But then, almost overnight, the ensemble disappeared, and with it, three of the five different types of violin.

What happened? In a word: Stradivarius.

The master from Cremona, Italy, Antonio Stradivari came up with perfection, a virtuoso violin, a soloist’s dream. Suddenly everyone wanted to play “that,” said Antoine Laulhere, a luthier in Paris. In his violin workshop, he said that meant discarding the older, less glamorous instruments in the 24 Violins orchestra.

He bows a 17th century bass violin in his workshop to illustrate the difference in timbre.

“You have to know,” he said, “these violins belonged in the interior of the orchestra. That was the French Baroque sound. It’s not a soloist’s sound. These instruments simply became obsolete, like Play Station 1."

But they've become an obsession for Cohen-Akenine, who first approached Laulhere several years ago with what seemed like an impossible challenge.

“He came and asked us to recreate a lost sound,” Laulhere said, “a sound that existed only in his head. He explained it to me. He made me dream of the missing violins, to understand that each instrument was a key in the larger sound, a piece in a larger puzzle.”

On the low-end of King Louis’ puzzle you had that gravelly bass. On the high-end, a stringent, nearly mosquito-like whine. What’s so remarkable about the recreation of these instruments is that Laulhere and Cohen-Akenine had almost nothing to work with. There were no recordings or photos from the late 1600s. They didn’t even have drawings. All they had was sheet music from the time, oblique references to the instruments in texts. Sometimes they’d find a piece of an original violin.

“Some of the bigger violins were literally cut up and recycled,” Cohen-Akenine said. "The body, for example, might have been really wonderful, so the neck was cut off and a luthier would attach a new, smaller neck to fit the times. From these remnants we could more or less reverse engineer and figure out the original sizes.”

The largest of the three missing violins, the quinte, is the size of a small guitar, but it’s held and bowed like a violin. You need a shoulder strap to hold it.

Cohen and Laulhere said they’ll never know if they got the instruments exactly right and that’s caused some controversy in the world of Baroque music. But Laulhere said reconstructing a sound exactly is impossible under any circumstances.

“Because the sound one person hears is filtered through the ears, processed in the brain, so in the end it’s not the same sound that I hear,” Laulhere said. “Everyone digests sound in a very personal way. Sound is like perfume on people. It smells very different depending on who’s wearing it.”

The reconstructed violin orchestra performed a concert earlier this week in Montpelier, France. Orchestra leader Patrick Cohen-Akenine said he considers himself as much a pioneer as a player.

He said you’ve got to keep researching, prospecting, as it were. Otherwise Baroque music risks becoming "standardized" — dance music for dead kings.