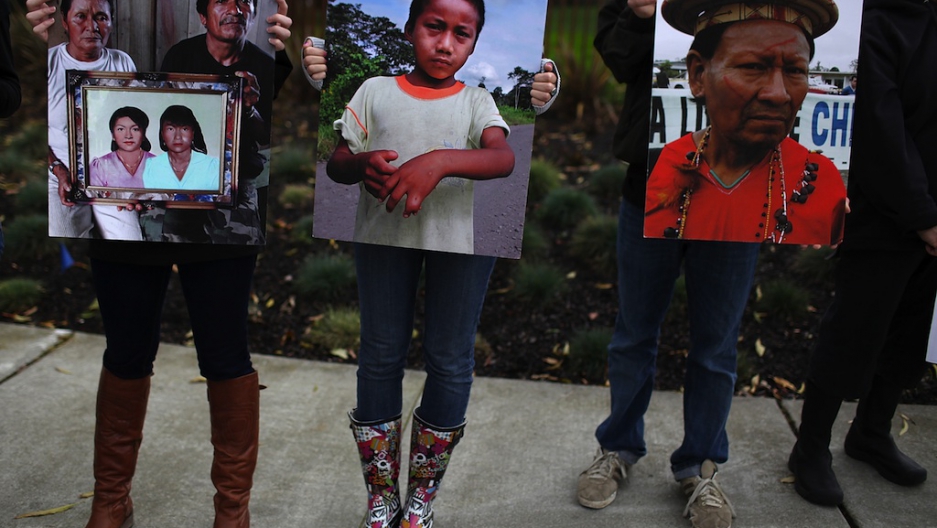 Protesters stand outside Chevron's US headquarters holding photos of Ecuadorian people affected by pollution in the Amazon on February 15, 2011.
Credit: Justin Sullivan
Share

An Ecuadorian court has ordered US oil giant Chevron to pay $19.02 billion in compensation for environmental damage relating to its operations in the Amazon.

It is $1 billion more than the original fine imposed in 2011. The ruling – considered one of the biggest ever for environmental damage – was upheld by an appeals court in January. The increased fine came about after Chevron appealed the decision in Ecuador's Supreme Court.

"Due to an involuntary calculation error, the reparations now amount to $19,021,552,000," Agence France-Presse quoted an unnamed court official as saying.

Thousands of indigenous people and local farmers accused US oil company Texaco Petroleum Co. of contaminating large areas of Ecuador’s Amazon rainforest when it operated in the region between 1964 and 1990.

Chevron inherited the lawsuit in 2001 when it bought Texaco, but it has denied responsibility for poisoning the land.

According to Dow Jones Newswires, Judge Lilia Ortiz said the $19.02 billion included about $900 million for the Amazon Defense Front, an activist group leading the class action against Chevron, and $8.6 billion because Chevron didn't apologize for the pollution.

More from GlobalPost: Petrol that funded Myanmar's junta now open to US firms