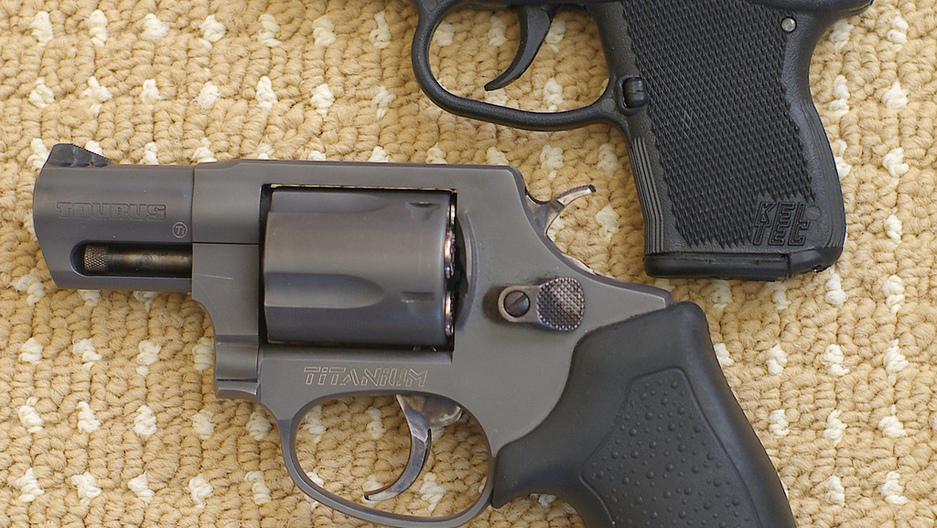 Many of the recent purchases were handguns for self-protection. (Photo by bk1bennett via Flickr.)

After the deadly shooting in Colorado last week, gun sales are up across the country.

Bloomberg reporter Michael Bender said firearm sales are up by more than 40 percent in Colorado, where the shooting took place. The numbers are based on the number ofbackground checks processed, which are required before most gun purchases are made.

In the four days after the July 20 shooting, dealers submitted 3,647 requests for state background checks required to buy a firearm, Susan Medina, a spokeswoman for the Colorado Bureau of Investigation, told Bloomberg.

Sales in Oregon, Florida and California are up about 10 percent, and in Illinois and Utah, background checks for firearms went up 40 percent, according to The Huffington Post and The San Francisco Chronicle.

But these spikes are common after high profile shootings.

After Congressman Gabrielle Giffords was shot in Arizona last year, there was a 60 percent jump in sales.

“What gun shop owners will say is that it’s really two-fold. Mostly, it is fear that there will be new gun laws prohibiting weapons or ammunition in some form or fashion, and that customers need to stock up on what’s available. But there’s also just a human emotional fear element to it as well,” Bender said.

The debate over gun laws is heating up. A group of mayors led by Michael Bloomberg want better background checks for firearms sales, including taking into account mental health issues. A man in Maine who said he took a gun into a Batman screening lied about his drug addiction on his background check. Police later found an AK-47 assault weapon, four handguns, ammunition and news clippings about the mass shooting in his car.

According to the Chicago Sun-Times, the Chicago City Council revised the city's gun ordinance this week and approved Mayor Rahm Emanuel’s proposed restrictions on firearms sales. The new ordinance bans anyone with a violent felony conviction from firearm ownership and includes a five-year ban on gun purchases for anyone convicted of a violent misdemeanor.

Dick Rutan, owner of the Gunner’s Den in Arvada, Colo., told the Associated Press his phone is ringing off the hook for concealed-weapon training certification, but he’s not selling guns to everyone who walks in the door.

“I have flat out told people 'you know, I don’t like your manner, I don’t like the way you collect yourself.' If I smell alcohol on somebody’s breath, I don’t care how much money they have,” he said.

Bender said the fear of more restrictive gun laws is completely unfounded. During his campaign, President Barack Obama said he wanted to renew the assault weapons ban, but even with a Democratic Congress his first two years in office, there was no push for it.

“There hasn’t been a major overhaul of gun laws since ’94, when the assault weapons ban was put in — and that lapsed 10 years later, in 2004,” Bender said. “We see these kinds of spikes more and more often after a high profile shooting. I talked to a gun shop owner in Illinois who wouldn’t comment because she was too busy in her shop. She said she had too many people in line waiting to pay for their purchases to talk to a reporter.”