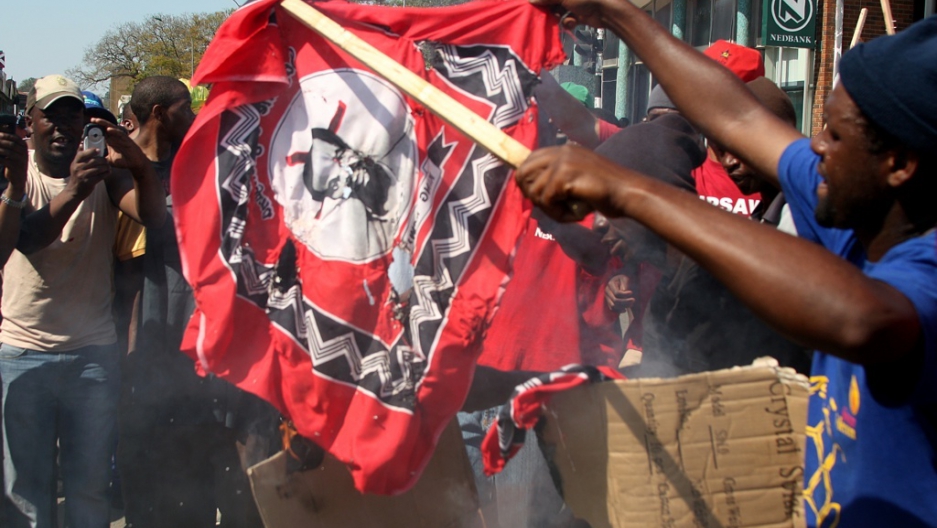 A Swazi protester burns a cloth with an image of King Mswati III during one of the largest protests yet against Africa's last absolute monarch and his regime, in Swaziland's biggest town, Manzini, on Septmber 6, 2011. Over a thousand demonstrators brought the town of Manzini to a standstill demanding an end to royal rule, the unbanning of political parties and the release of political prisoners.
Credit: Stringer
Share

A protest was held today in front of Swaziland's parliament, a day after thousands of teachers took to the streets amid a month-long labor strike -- all rare flashes of public dissent in the tightly-controlled poor African country, according to Al Jazeera.

Maybe Swazilans feel like now's the time to make a move. After all, the royal family is pretty busy planning for their trip to Las Vegas.

First the country's notoriously extravagant royals had to sort out the living situation. How about 10 villas? Great. They'll cost about $2,410 a night? Sold. Second, there's need for "the help" -- a concern quickly sorted by way of a "66-person royal retinue," reported the Guardian.

And there you have it. Soon King Mswati III's three wives will board their private jet to Vegas and leave their impoverished population in the dust. ("Queens Off On Shopping Spree," announced AllAfrica.)

The king appears to be staying put, though, having proclaimed recently, "God warned the Swazi people not to love money."

In a country where two-thirds of the people live on less than two dollars a day, the absurd comment was interpreted by many as a warning that the king is watching them.

The tactic appeared to have been worked. Today's protest sparsely was attended because, according to Al Jazeera, "[h]eavy security deployments scared many people off."

"Teachers will not teach even under the barrel of the gun," Mazibuko said. They have been told to start teaching again on Monday or they'll be fired, said Al Jazeera.

The rest of the country's public employees, meanwhile, have been on strike for weeks in a call for a salary raise of four-and-a-half percent.