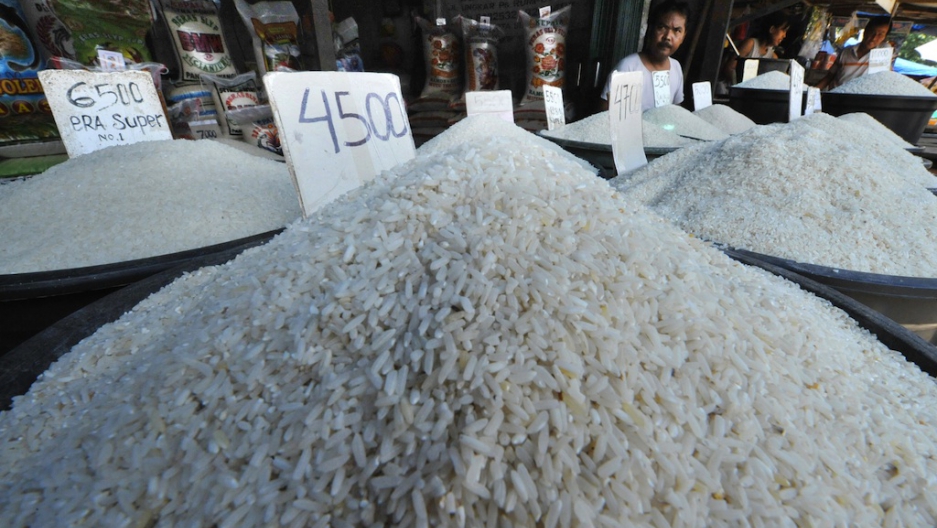 Various kinds of rice are displayed for sale at a market in Jakarta. Rice may be Southeast Asia's saving crop.
Credit: Bay Ismoyo
Share

PART ONE: How bad is it? How bad might it get? Mitigating factors?

While an American drought saps the world’s corn supply and jacks up global food prices, there is less panic in Southeast Asia. The region’s principal grain, rice, remains plentiful.

Southeast Asia’s taste for rice will help insulate the region from the worst fallout of the corn-driven food shortage. Thailand and Vietnam, the world's first- and second-largest rice exporters, have harvested enough rice this year to go around. This offers the world an insurance policy against massive hunger: if corn or wheat prices spin out of control, food importers across the globe could abandon these crops for Southeast Asian rice to stave off a potentially dire food shortage.

And in Thailand, considered the center of the rice-producing universe, the government would love to sell off its abundant supply. Across the region, decent weather has enabled healthy harvests. But Thailand’s warehouses are practically bursting thanks to a fluke of populist politics. To secure votes in rice country, Thailand’s ruling party has vowed to buy every grain farmers can harvest for up to 50 percent above the market rate.

The result: overstuffed rice warehouses, a government eager to sell off its stores and a potential release valve if corn sends food prices into crisis mode.

Conventional wisdom dictates that food security in Southeast Asia revolves around rice. But as the region's consumer class swells, more families are opting to fill their bellies with meat in lieu of Asia’s signature grain. In Vietnam’s go-getter economy for example, Asian Development Bank stats show the average person’s diet drawing 73 percent of their daily calories from rice five decades ago compared to just 57 percent in recent years.

While middle-income Southeast Asians don’t eat much corn, their dinner often does. Chickens, cows and pigs feed on both milled corn and soybeans, another crop wilting from the American drought. This threatens to nudge up the price of meat for families who truly feel the difference a dollar makes.

The hike in food prices also comes at an inconvenient time for Indonesia, a sprawling, Muslim-majority archipelago that comprises Southeast Asia’s largest economy.

The ongoing month-long Ramadan period, in which most Indonesians fast by day and feast by night, already encourages buying habits that stoke inflation. When families stockpile food for meat-laden evening spreads and end-of-Ramadan blow-out dinners, markets are drained of supply and vendors can charge more for food. This is compounded by sellers who hike prices during the high-demand Ramadan weeks, just because they can. All this is compounded further by price increases resulting from the American drought.

Southeast Asians, namely those in Indonesia and the Philippines, can and will take to the streets if food prices spiral out of control.

This has given rise to state-run institutes, such as Indonesia’s “Bulog,” that attempt to keep the poor content by stabilizing food prices. This year, according to Bulog figures, the government will dump more than $14 million into subsidized food. In the Philippines, a similar institution (the National Food Authority) has tried to ward off the wild protests of the past by locking up food hoarders and subsidizing cheap rice.

But with the government helping steady food prices, and enough rice on hand to feed the destitute, no one foresees the specter of food riots returning to the streets of Manila or Jakarta this year. The Coca Cola-swigging middle and affluent classes of Southeast Asia may feel a bump in costs of meals that rely on corn. Extra-high meat prices may force Indonesian moms to prepare less-lavish Ramadan feasts. But this is unlikely to translate into widespread ire against the government.

More from GlobalPost: In Indonesia, a debate over holy volume knobs