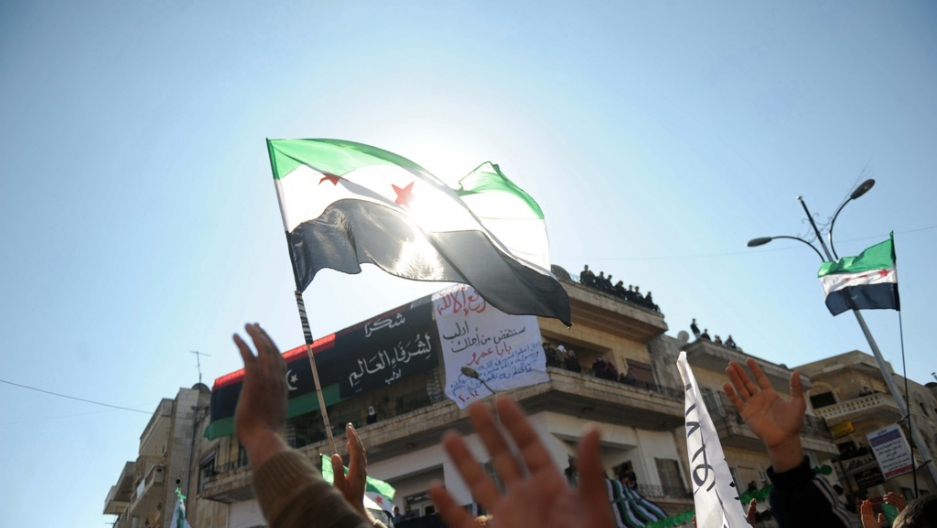 Syrian demonstrators wave the pre-Baath Syrian flags during an anti-regime protest in the centre of Idlib in northwestern Syria. The Assad regime suffered a "tremendous blow" when a bomb ripped through a government building in Damascus, killing several senior officials.
Credit: Bulent Kilic
Share

At least 17,000 people have been killed in 16 months of fighting between the regime and rebel forces, with reports of continued violence today in Aleppo.

Tlas told the Al-Sharq Al-Awsat daily in Jeddah that rebel forces need to work together in order to accomplish a transfer of power from their arch-enemy, Syrian President Bashar al-Assad, with whom Tlas was reportedly once close.

Now, however, the general "does not see a future for Syria with his former friend at the helm," as the Associated Press put it.

"Sometimes in a friendship you advise a friend many times, and then you discover that you aren't having any impact, so you decide to distance yourself," Tlas said, explaining his defection from the regime last month, according to AP.

Assad has been widely condemned for his brutal attempts to tamp down unrest, with rights organizations accusing the Syrian regime of war crimes. Rebel forces last week announced a fresh offensive to oust Assad, who soon afterwards lost four close aides in a bold bomb attack.

The incident led to speculation that Assad's regime was nearing its end, but Tlas said it won't be so easy. The "structure and system of the regime makes a coup from inside very difficult," the general explained, adding that Assad's circle of powerful advisors kept him unaware of the extend of the revolt until it was too late.

Tlas, the son of the nation's former defense minister, said he left the country in order to "unite the honorable people inside and outside Syria to set out a road map to get Syria out of this crisis," according to Reuters.

But the job, he said, can't be done alone. That's why Tlas, whom AP said comes from a well-known Sunni Muslim family, is already discussing plans with various forces inside and outside the country.

"I will cooperate with every honorable person who wants to rebuild Syria, be it the National Council or the Free Syria Army," Reuters cited him as saying.