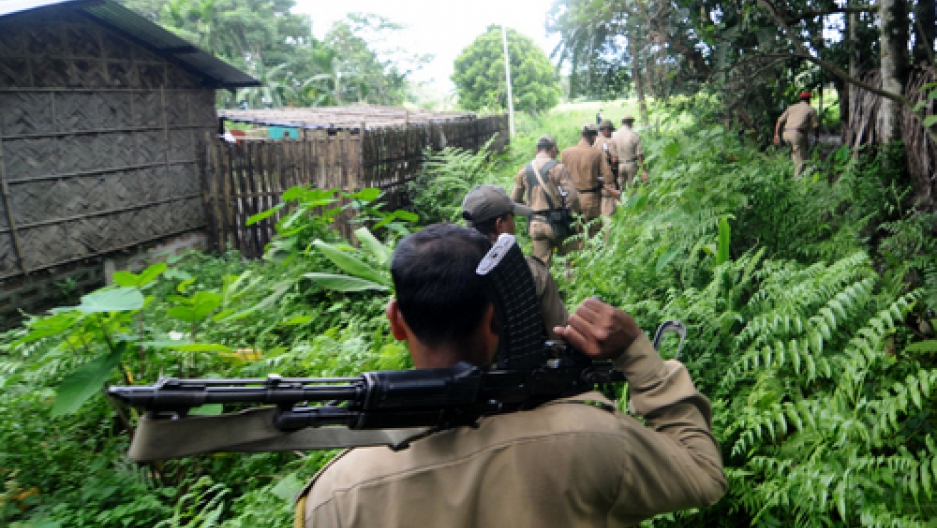 Indian security personnel patrol at Dangtol village, in Chirang District, some 200km from Guwahati, the capital city of India?s northeastern state of Assam on July 25, 2012. Indian police recovered 12 bodies from rice fields and roadsides in the remote state of Assam as the death toll from ethnic violence rose to 38 after four days of bloody clashes.
Share

Tweeters and bloggers have accused Indian TV news channels of ignoring the ongoing ethnic riots in Assam, due to a bias in favor of the Congress Party.

According to FirstPost, many have contrasted TV's late attention to the story to the rapid response and 24/7 blitz following the Gujarat riots of 2002, noting that Assam is a Congress-ruled state while the BJP is and was in power in Gujarat.

Of course the Indian media is biased to some degree, just like Fox News or the New York Times. And there might well be a tilt against Gujarat Chief Minister Narendra Modi, who continues to take the blame for an unspecified role in the 2002 riots despite various court rulings that there is not enough evidence to hold him responsible.

Yet since the first tweeters drew attention to the spotty reportage, all the main newspapers have moved the Assam riots to their front pages, various web-only publications have opened up the debate on the causes and larger ramifications of the conflict, and even the international media have zeroed in. (Anybody who still expects to get their news from TV should stop reading here).

Even with the state machinery out in full gear and soldiers maintaining vigil in four districts, violence in lower Assam continued unabated on Wednesday, with the conflagration scorching new areas in Kokrajhar and Chirang districts where eight more bodies were found.

The toll of those killed in ethnic and communal clashes, fuelled by animosity between Bodos and the rising population of Muslims who settled on tribal land, now stands at 40. The killings have led to one of the largest ever exoduses in Assam's recent history, with officials saying 1.7 lakh (170,000) people from 400 villages in Kokrajhar, Chirang and Dhubri districts are now homeless and sheltered in 128 camps that dot the conflict zone.

So are the critics overstating the case for a bias-inspired media blackout because TV coverage was tardy?

Since Partition -- the bloody 1947 division of India and Pakistan -- the occasional flare-ups of violence between Hindus and Muslims have been seminal news events, while the riots in Assam involve a usually ignored tribal group that is vying for a separate state and a Muslim population that includes illegal immigrants from Bangladesh. Moreover, not only Assam but the whole of India's northeast rarely receives national news coverage, for the simple reason that so-called "mainstream India" hardly bothers about the region or its people, who are distinct enough ethnically to seem, anyway, to hail from another country altogether.  Gujarat, on the other hand, has always been part of the mainstream.

But these arguments have not gone down with critics.

The suggestion that the number of deaths in the two riots – Gujarat 2002 and Assam 2012 – established a hierarchy of news interest received extraordinary pushback, and was subsequently retracted. (Only 40 people have been killed so far in the Assam riots, whereas the toll in Gujarat was in excess of 1,000.), FirstPost reports.

The reasoning that logistical challenges to getting live cameras in place across the trouble spots in the northeastern State too was met with cynicism. In the perception of the media critics, the fact that in this day and age of advanced technology and 4G connectivity, television cameras couldn’t get to the scene of the crime quickly enough and beam live images was merely an extension of their political bias.

There are, indeed, points to be made against both arguments. It is a morally repugnant reality that 1,000 deaths make a bigger story than 40.  But it is a reality. And it is absurd that India's "national" TV media devotes 80 percent of its time to events taking place in New Delhi.  But that, too, is a reality.  And it's the result of solipsism and ethnocentrism rather than a blinkered allegiance to Congress Party-style secularism (which is the Indian equivalent of America's multiculturalism, or, in its worst form, political correctness).