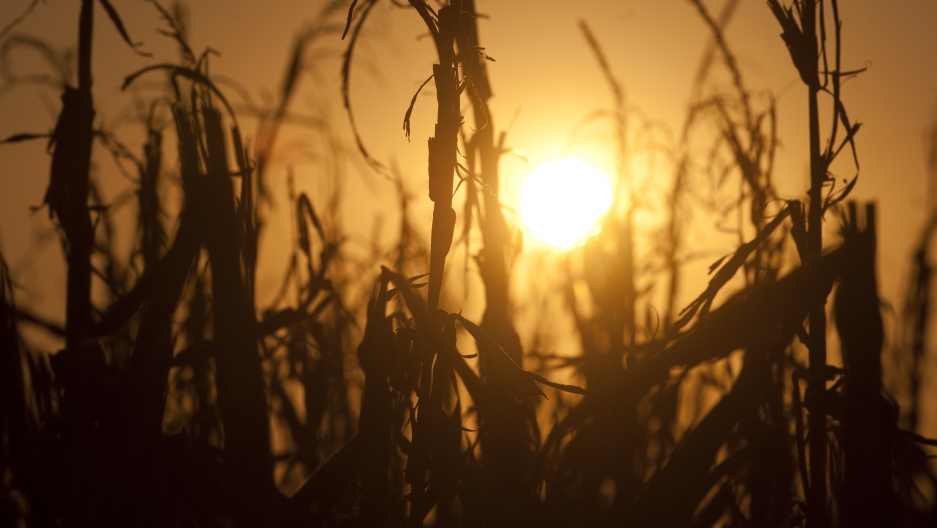 Severely damaged corn stalks due to a widespread drought are seen at sunset on a farm near Oakland City, Indiana, Aug. 15, 2012. Record heat throughout the US farm belt states have curtailed crop production and likely will send corn and soybean prices to record highs, according to the US Department of Agriculture.
Credit: Saul Loeb
Share

There are two breadbaskets in the Western Hemisphere, and while the one in North America withers, the one down south could be cashing in.

Across northern Mexico and much of the Midwestern United States, the worst drought in 50 years has blitzed crops and decimated livestock. Futures for corn, wheat and soybeans are soaring to record highs on world markets as other key grain-producing regions also go dry this season.

Latin America’s biggest beneficiaries are likely to be the big Southern Hemisphere farmers of Brazil and Argentina. But the region’s most vulnerable countries could be facing a new season of hunger, economists and food security experts warn.

Higher prices are only beginning to show up at the dinner table, since most global food staples are sold as futures in order to hedge against fluctuations. Corn has doubled in its per-bushel-price in the past month, and on Wednesday the US Agriculture Department released new figures projecting price increases of up to 5 percent for meat, eggs and dairy next year.

“In the short run, the situation needs very detailed monitoring, in order to understand how prices will develop,” said Wilhelmus Janssen, the lead agriculturist for the World Bank in Latin America and the Caribbean.

At the same time, Janssen said, the current drought should be a call to action.

“This is the third ‘food price crisis’ in five years,” said Janssen. “The implication is that the world needs to invest seriously, and quickly, in increasing its productive potential, and in reducing the vulnerability of production.”

Hunger riots broke out in Haiti the last time world food prices spiked in 2008, forcing the country’s prime minister from office. That was before the devastating 2010 earthquake killed 200,000 and left nearly a million Haitians homeless.

Haiti is even more vulnerable now, with food prices there already creeping up, according to local figures.

Other countries in the region that heavily depend on imported food — such as Guatemala and El Salvador — could also be hard hit.

Each year the United States exports about $25 billion worth of agricultural products to Latin America, according to 2010 USDA figures. That amounts to roughly 23 percent of all US farm exports.

More than half of that food goes to Mexico, which is coping with its worst drought in history.

Cornfields and little “milpas” across northern Mexico have been reduced to dusty, blighted wastelands this summer, after years of insufficient rainfall — or no water at all.

So many cattle have perished that Mexican agriculture officials say the country’s industry will take years to recover.

The Mexican government has already spent more than $2.5 billion dollars to provide food aid and emergency water supplies, and food imports rose 35 percent last year, according to Reuters. This year’s imports are projected to be even higher.

Already the effects of the drought have forced an unknown number of Tarahuamara Indians from Mexico’s Sierra Madre mountains to leave their villages in search of government assistance. Some end up settling into shantytowns on the outskirts of northern Mexican cities like Ciudad Juarez and Chihuahua.

Food shortages and hungry bellies could create other tensions across the hemisphere.

“Rising food prices always have an impact on political stability, and are a push factor for migration to cities, to the US, and intra-regionally,” said Vicki Gass, a food security expert at the Washington Office on Latin America, a policy research center.

The worsening drought should also be a wake-up call for more concerted efforts at coping with climate change, Gass said. “Are governments doing enough to mitigate and adapt to these extreme weather events?” she asked.

Powerful business interests in the region aren’t waiting around.

The Brazilian government said the country will harvest more corn than ever this year, 70 million metric tons. But US production tops 300 million tons annually, so the drought dragging down America’s corn production is still likely to keep prices high.

The potential for big payoffs could end up worsening tensions in one country that could be profiting wildly from the northern drought: Argentina. Export controls imposed by President Fernandez de Kirchner’s government have discouraged farmers from planting more wheat, driving down production at a time when Argentine growers stand to benefit most.

“Not all parts of the world have the ability to contribute to increased global production levels, with especially Asia being land and water constrained,” said the World Bank’s Janssen.

“But Latin America, and especially the Southern Cone [Argentina, Brazil and Chile] have considerable potential to contribute to increased global production,” he said. “Countries should seriously start considering how to increase their production levels through environmentally sustainable investment in production capacity and technology.”